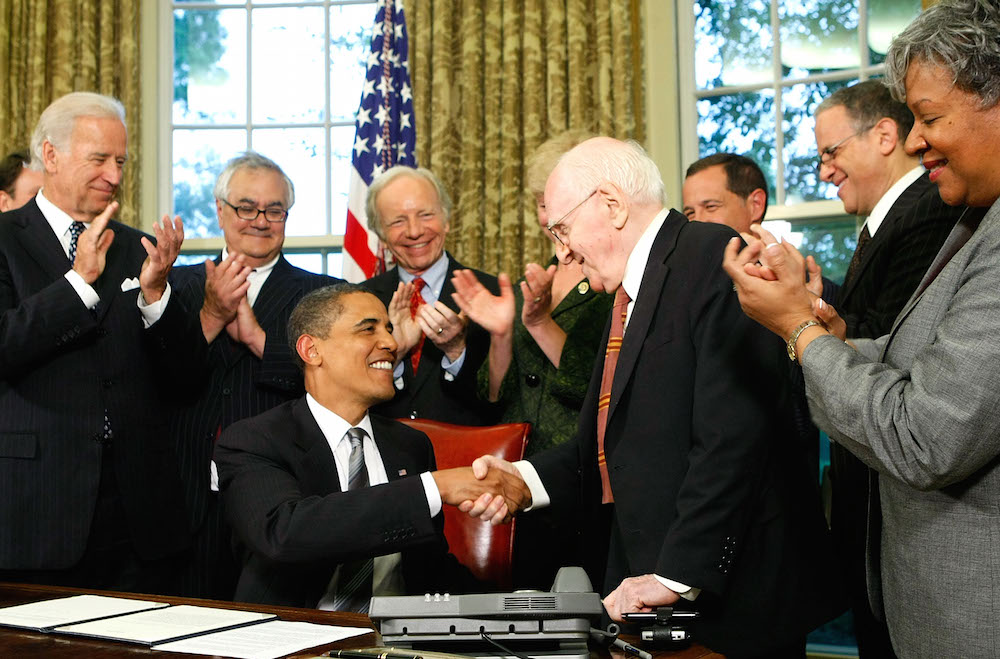 PHILADELPHIA (JTA) — On July 4, 1965, 40 people gathered outside this city’s Independence Hall for the first Annual Reminder demonstration on behalf of civil rights for gays.

For this weekend’s 50-year commemoration, thousands attended a ceremony that included a reenactment of the initial protest.

The milestone, which comes barely a week after the U.S. Supreme Court’s landmark ruling affirming same-sex marriage as a constitutional right, is being marked by several Philadelphia museums, including the National Museum of American Jewish History across the street from Independence Hall. When the court ruling was announced on the morning of June 26, the museum waived all admission fees in celebration. 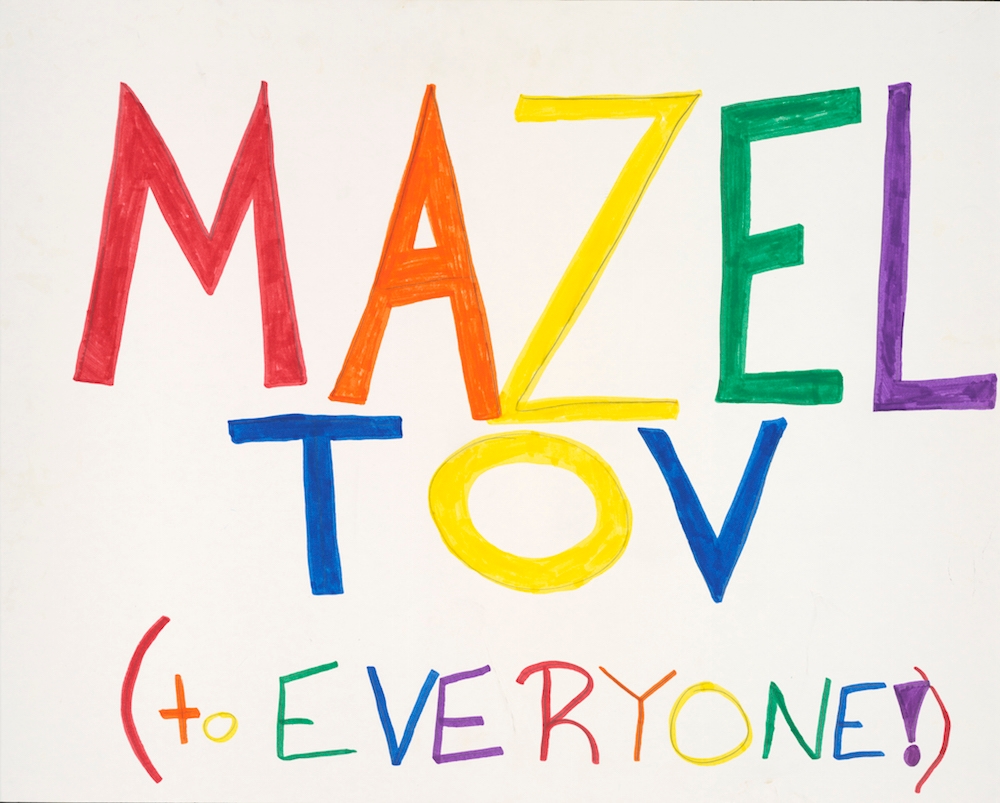 A placard expressing a similar sentiment is among the items featured in the museum’s new exhibition, “The Pursuit of Happiness: Jewish Voices for LGBT Rights,” which highlights the contributions of Jews to the gay rights movement.

The sign, which reads “Mazel tov (to everyone!)” in the six hues of the gay pride flag, was held aloft by Cody Owen Pomeranz outside the Supreme Court in 2013 on the day the justices struck down a key provision of the 1996 Defense of Marriage Act, which prohibited the federal government from recognizing same-sex marriages.

The sign appeared in news photographs and caught the attention of museum officials, who tracked down Pomeranz and secured his donation of the poster.

“We thought it was a joyous and culturally relevant expression of the role Jews have been able to play in the LGBT rights movement,” said Yael Eytan, the museum’s director of marketing and communications. “The sign was also witness to a moment of triumph that paved the way” to last week’s court decision.

The exhibition, which runs through October, focuses on three Jewish pioneers of the American gay rights movement: Frank Kameny, an astronomer who unsuccessfully appealed his firing from a federal job in 1957 because he was gay; Clark Polak, a Philadelphia businessman whose magazine, Drum, advocated for gay rights; and Martha Shelley, the president of a New York City lesbian organization, Daughters of Bilitis, who in 1970 fought the National Organization of Women’s exclusion of lesbians from prominence in the feminist movement. 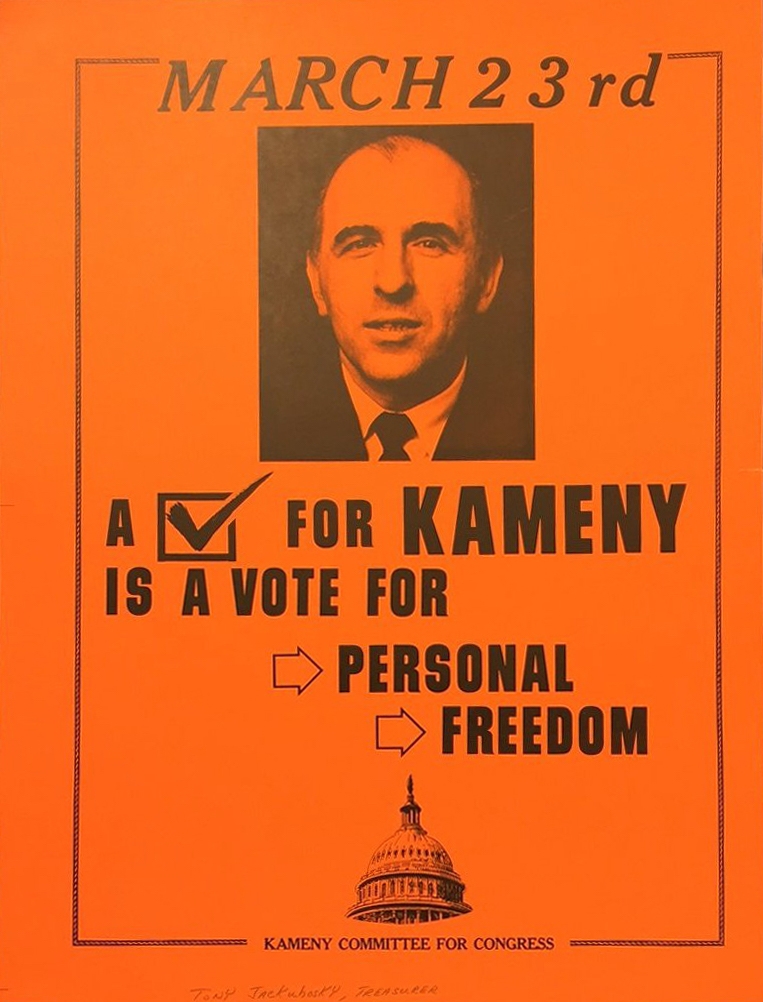 Among the items featured is a 1971 poster for Kameny’s failed congressional campaign and a photograph of him at the 1965 demonstration. There’s also a photo of a lesbian couple marrying beneath a chuppah in Brooklyn in 2004; a copy of the 1985 issue of “A New Haggadah: A Jewish Lesbian Seder”; and a 1970 issue of Gay Youth’s Gay Journal published by Mark Segal, the present-day publisher of the Philadelphia Gay News.

On display as well is a booklet reporting on the last Annual Reminder march, in 1969, and handbills distributed prior to a 1965 protest at Dewey’s, a local restaurant that refused to serve gay customers. Polak was arrested at an earlier protest at Dewey’s that “strongly evoked desegregationist sit-ins in the South,” a display panel explains.

The museum also set up a Tumblr site to encourage the sharing of perspectives about being an LGBT Jew in America and, on Thursday, hosted a panel discussion that included Douglas Hallward-Driemeier, the attorney who successfully argued the marriage equality case before the Supreme Court.

“Jews, who are only a very small percentage of the American public, have been very engaged in civil rights struggles in this country,” said Marc Silber, a Philadelphian who created the Stonewall National Museum and Archives, a museum of gay history in Florida. “It makes perfect sense that Jewish gays and lesbians were at the forefront. I’m a gay man. Of course I take pride in that.”