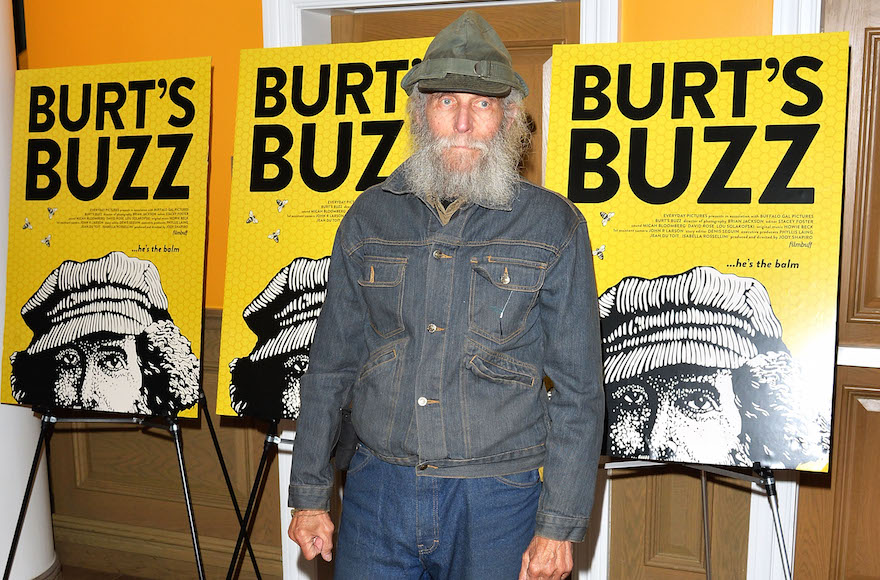 Burt Shavitz, the face of Burt's Bees, promoting a documentary about him at the Crosby Street Hotel in New York City on May 29, 2014 (Andrew H. Walker/Getty Images)
Advertisement

(JTA) — Burt Shavitz, the Jewish beekeeper and co-founder of the Burt’s Bees cosmetics company, has died.

Shavitz, born Ingram Shavitz in Manhattan in 1935, died of respiratory problems in Bangor, Maine, on Sunday while surrounded by family and friends.

He grew the Burt’s Bees company with business partner, Roxanne Quimby, and his scraggly, bearded image became the face of the brand. Quimby bought out Shavitz’s share in the company for an undisclosed sum in the mid-1990s before Burt’s Bees was sold to Clorox for $925 million in 2007.

Shavitz has said that he was forced out of the company because he had an affair with an employee. In addition to the buyout money, Shavitz received 37 acres of land in Maine.

“In the long run, I got the land, and land is everything. Land is positively everything. And money is nothing really worth squabbling about. This is what puts people six feet under. You know, I don’t need it,” he said last year.

After spending time in the U.S. Army and working as a photographer for Time-Life, Shavitz left New York and moved to Maine in 1970, where he began making honey. In the 1980s he met Quimby, who made new products from Shavitz’s beeswax and moved the company to North Carolina in 1994.

“Burt was an enigma; my mentor and my muse. I am deeply saddened,” Quimby told The Associated Press.

Shavitz was the subject of the 2014 documentary “Burt’s Buzz,” which delved into his unusual career and eventually reclusive life in Maine.

“Roxanne Quimby wanted money and power, and I was just a pillar on the way to that success,” Shavitz said in the film.

Shavitz owned three Golden Retrievers and had a reputation for being a quirky, straight-talking hippie.

“We remember him as a bearded, free-spirited Maine man, a beekeeper, a wisecracker, a lover of golden retrievers and his land,” the Burt’s Bees company said in a statement.