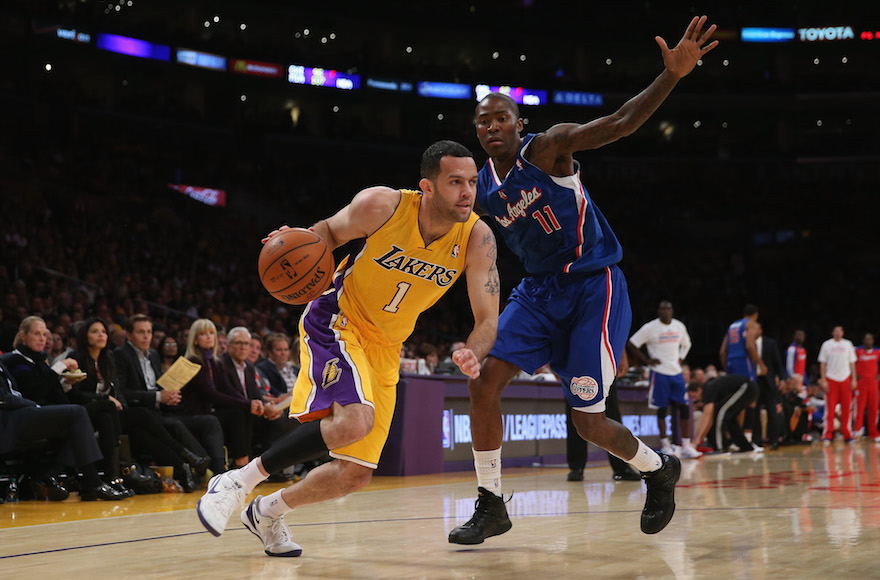 Jordan Farmar #1 drives toward the hoop in his days on the Los Angeles Lakers, October 29, 2013 (Jeff Gross/Getty Images)
Advertisement

(JTA) — Jordan Farmar, a Jewish NBA player who won two league championships as a member of his hometown Los Angeles Lakers, is heading back to Israel to play for Maccabi Tel Aviv.

Farmar, who is Jewish, played 16 games for Maccabi Tel Aviv during the NBA lockout of 2011. The 6-2 guard, a standout at UCLA, was on the Lakers for five seasons. He also has played for the New Jersey Nets and  Los Angeles Clippers, who released him in January. Farmer averaged 7.7 points and 2.9 assists over his NBA career.

“I’m very excited, happy to have received this opportunity and ready for the big challenge,” Farmar told the Maccabi website. “I can’t wait for the moment that I return to the place which is like a home to me — the State of Israel, the city of Tel Aviv and Maccabi.”

Maccabi’s head coach, Guy Goodes, told The Jerusalem Post that the club is “very happy” to have Farmer returning.

“We all know about his massive, massive talent, endless offensive capabilities and his great experience in the NBA,” Goodes said.

Meanwhile, Omri Casspi, the first Israeli to play in the National Basketball Association, recently signed a two-year, $6 million contract to remain with the Sacramento Kings, the team that drafted him in 2009 and reacquired him for the 2014-15 season. Casspi averaged nearly 20 points per game during the last month of last season.