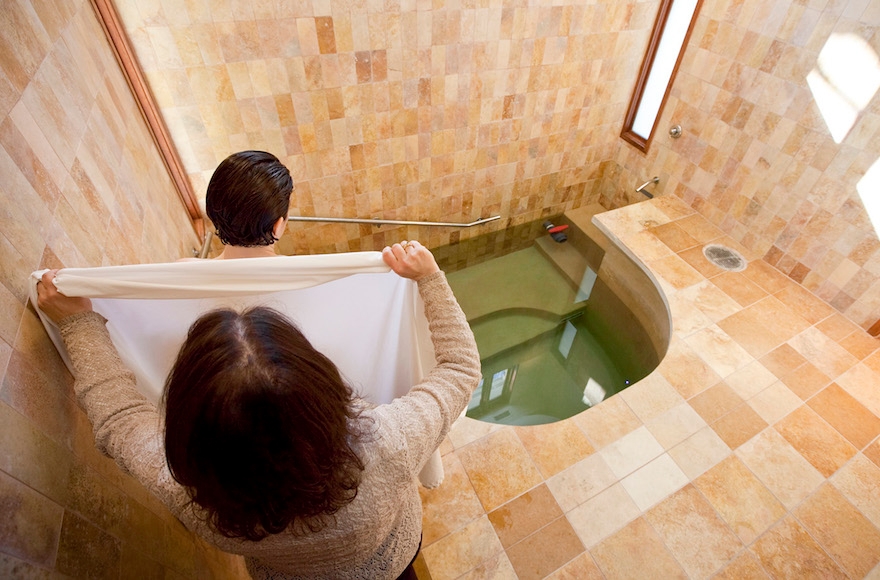 NEW YORK (JTA) – After facing criticism for its handling of inappropriate behavior by a convert-supervising rabbi who turned out to be a mikvah-peeping voyeur, the country’s main centrist Orthodox rabbinical group has released key guidelines aimed at preventing abuses during the conversion process.

The Rabbinical Council of America is recommending that would-be converts be given a clear sense from the outset of the timeline and requirements for conversion, and that the conversion curriculum be standardized.

The review of the RCA’s Geirus Protocol and Standards (GPS) conversion process, announced last October two weeks after Rabbi Barry Freundel’s arrest, was designed to establish safeguards against rabbinic misconduct and included both women and converts.

Aside from his crimes of voyeurism, including having female conversion candidates take “practice dunks” in the mikvah ritual bath so he could record them naked on a hidden camera, Freundel had conversion candidates do free clerical work, kept prospective converts in the dark about how long their conversions could take and employed seemingly arbitrary benchmarks for judging candidates’ readiness for conversion. Converts say Freundel is not alone among conversion-sponsoring rabbis in using seemingly capricious timelines and standards for conversion, despite the RCA’s centralizing of Orthodox conversion in 2007 under its GPS system.

READ: For some Orthodox converts, biggest challenges come after mikvah

“Although there are certainly significant benefits to having a centralized system for conversion, along with that comes some duty of care to handle complaints and grievances,” Evelyn Fruchter, an attorney who was one of the members of the RCA’s review committee, said last week in a speech at the RCA’s annual conference in suburban New York.

“I stand before you today as a Jew converted by a convicted sex offender,” Fruchter said of her conversion by Freundel, who was sentenced in May to nearly 6 1/2 years in prison after pleading guilty to 52 counts of misdemeanor voyeurism. “If there is one lesson I have learned from the Freundel scandal and other recent events, it is that rabbis can’t be the only people policing other rabbis. The RCA – in addition to its role with conversion – is a professional organization that helps and advocates on behalf of rabbis. This conflict makes checks and balances a must.”

Among the review committee’s other key recommendations:

• A process and mechanism for receiving and addressing complaints must be established, and successful converts should be surveyed about their experiences.

• Conversion-sponsoring rabbis should be better trained, including in being sensitive to conversion candidates. Rabbis working with female candidates for conversion should facilitate relationships between the candidates and female mentors.

• Prospective converts must be able to choose an alternative conversion court, or beit din, if they are uncomfortable with their own region’s beit din.

The RCA began to formally accredit Orthodox conversions in 2007 through the centralized GPS system, in which regional rabbinical courts work in tandem with converts’ sponsoring rabbis. Though some Orthodox conversions still take place under independent rabbinical courts, the RCA’s system offers a level of accreditation that is widely accepted, including by the Israeli Chief Rabbinate. 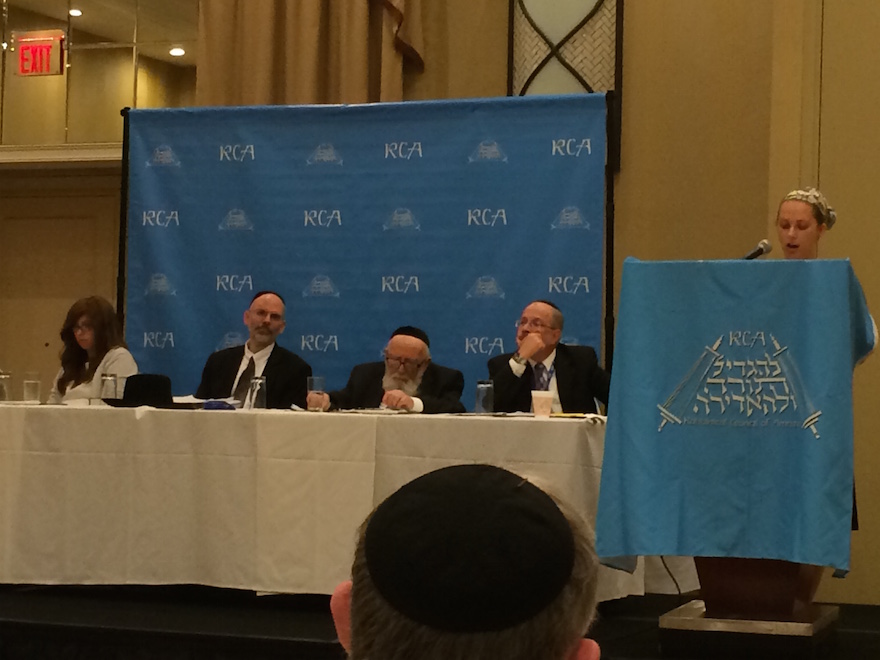 A speaker at a panel at the RCA’s recent annual convention in Tarrytown, New York. (Courtesy of RCA)

In addition to formulating recommendations, the review committee’s report offers a first-ever snapshot of Orthodox conversion in America, thanks to two surveys that were conducted as part of the review process that interviewed 439 Orthodox converts and 107 sponsoring rabbis.

Among the survey’s findings:

• Seventy-eight percent of all those who convert through the RCA’s system are women.

• Forty-five percent of respondents said they had some “Jewish ancestry,” and about one-third had previously begun or completed other conversion processes, including with other Jewish movements.

• Twenty-eight percent of respondents said they felt there was no one to whom they could turn if they experienced discomfort during the conversion process.

• About one-quarter of respondents felt the conversion process was unprofessional or somewhat lacking in professionalism.

• In New York City, almost half of all sponsoring rabbis have experience guiding no more than one or two converts.

READ: How does Freundel’s mikvah-peeping jail sentence stack up?

“The Torah commands a special and unique love for converts and prohibits any and all forms of abuse and disrespect,” Rabbi Mark Dratch, executive vice president of the RCA, said in a statement. “The review of GPS was an expression of the RCA that we need to and want to listen and hear from people who have converted — and we did and we will. We want to hear these insights and improve in this critical area.”

In addition to the challenges they endure while trying to convert, many successful converts to Orthodox Judaism say they were insufficiently prepared for the challenges they encountered once they had completed converting. Among the travails they cite are difficulties dating, having their conversion credentials frequently questioned, the heavy costs of an Orthodox lifestyle and, for converts of color, racism.

The review committee recommended that sponsoring rabbis go over these issues with prospective converts.

For converts of color, for example, the committee recommended, “Sensitivity should be shown, as appropriate, to matters of ethnic origin as it may impact a convert’s future integration into the Jewish community.” In an interview with JTA, Dratch explained that basically means preparing a convert of color for the racism they are likely to encounter in the Orthodox community.

With a significant proportion of people who were raised as Jews but do not technically qualify as such under Orthodox Judaism, some liberal-minded rabbis have recommended that candidates from Jewish-practicing homes face laxer requirements than other converts. But while the review panel recommended that these candidates be handled more sensitively – such as foregoing asking them to reject Christmas – Dratch told JTA that the RCA will require of them the same strict commitments to Orthodox Jewish life as required of all converts. Candidates with Jewish backgrounds may, however, have a faster track to conversion since their Jewish knowledge may already be quite extensive, he said.

The review committee also recommended that the Orthodox religious authorities that guide the RCA – Rabbis Gedalia Dov Schwartz of the Chicago Rabbinical Council, Mordechai Willig of Yeshiva University and Hershel Schachter of Y.U.’s Rabbi Isaac Elchanan Theological Seminary – offer clearer guidance on how to protect a woman’s modesty while immersing in the mikvah in the presence of rabbinical witnesses, what the minimum requirements for conversion should be, what issues may be at the discretion of individual conversion courts and what level of religious commitment is required of the conversion candidates’ Jewish romantic partners.

There is still much work to be done. Many of the review panel’s recommendations require the establishment of new committees and the formulation of new guidelines, and some require additional money. Among the added costs: making the national GPS director, Rabbi Michael Zilberman, a full-time position and providing additional resources to the Manhattan Beit Din, or conversion court, which faces a significant backlog of conversion cases. To that end, Dratch told JTA, the Orthodox Union will be contributing funds to the RCA, which is not a deep-pocketed organization.

The Orthodox Union includes affiliated synagogues, youth groups and advocacy organizations, and its kashrut supervision division is a significant source of revenue.

“I am hopeful that this report will make it better for American conversion candidates going forward,” Bethany Mandel, another convert of Freundel’s who served on the RCA review panel, told the RCA conference last week. “I’m cautiously optimistic. The framework we’ve laid out here, which others on the committee will delve into in detail, is a great start, but it’s up to many of you in this room today to make sure that the spirit of these recommendations is carried out.”