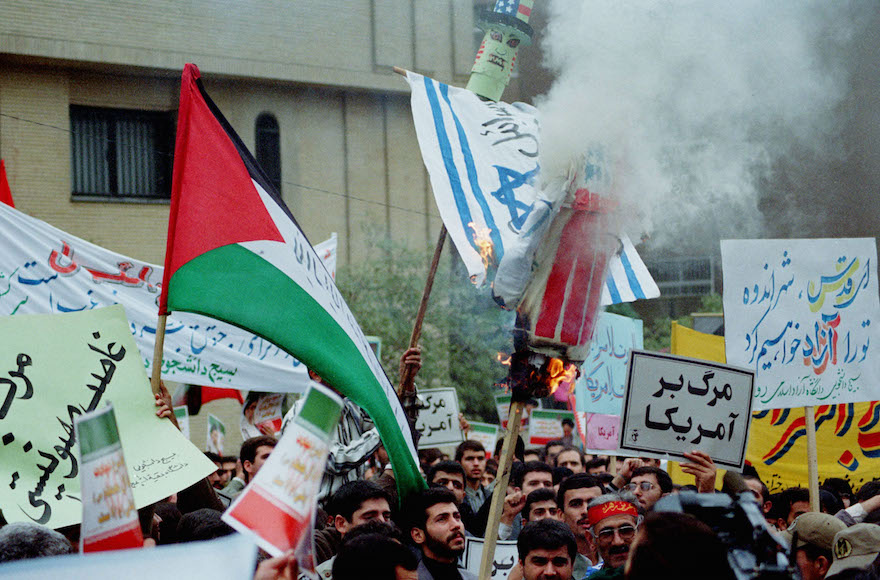 (JTA) — Millions of Iranians participated in annual pro-Palestinian Al-Quds Day rallies, which in many places featured chants calling for death to Israel and the United States.

The government-organized rallies, named for the Arabic name for Jerusalem, took place across Iran on Friday and included the burning of flags of both nations.

The day’s main slogan denounced the killing of children in “Gaza and Yemen.”

Ayatollah Ali Khamenei, the Islamic Republic’s supreme leader, called on other Muslims to unite around Al-Aqsa, the mosque atop the Temple Mount in Jerusalem, and the third holiest site in Islam.

“Supporting the oppressed was Imam Khomeini’s clear stance and a basic principle of ours,” Khamenei wrote Friday on Twitter, referring to the leader of Iran’s 1979 Islamic Revolution.

Meanwhile, American negotiators in Vienna are wrestling with the details of a deal to curb Iran’s nuclear program in exchange for international sanctions relief.

A final deal, fiercely opposed by Israel, will be the result of over two years of diplomatic work to hammer out an agreement between Iran and six world powers: the United States, Britain, France, Russia, China and Germany.

The previous deadline for the conclusion of the talks, June 30, has been extended several times and the schedule of President Barack Obama “has been left intentionally fluid to account for the fact that we may have news out of Vienna,” White House spokesman Josh Earnest said Thursday.

Secretary of State John Kerry suggested that the new deadline on Friday could fall by the wayside as well. “We will not rush and we will not be rushed,” Kerry said.