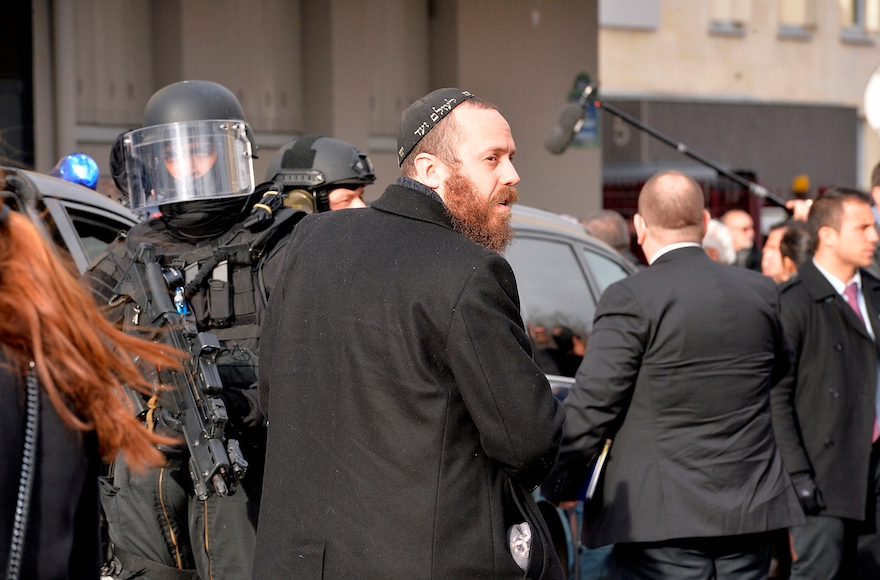 A Jewish man stands outside the Hyper Cacher supermarket as Israeli Prime Minister Benjamin Netanyahu pays his respect to the victims of the terrorist attacks on January 12, 2015, in Paris, France. (Aurelien Meunier/Getty Images)
Advertisement

(JTA) — The number of anti-Semitic attacks recorded in France during the first quarter of 2015 increased by 84 percent over the corresponding period last year, a watchdog group said.

The SPCJ security service of France’s Jewish communities released the figures Monday in a quarterly report that counted 508 anti-Semitic acts recorded between January and May. In the first four months of 2014, SPCJ recorded 276 incidents between January and May out of a total of 851 that year, making 2014 second only to the 974 incidents recorded in 2004 by the service. In all of 2013, SPCJ documented 423 incidents.

The worst of the attacks this year occurred on Jan. 9, when an Islamist killed four Jewish shoppers at a kosher supermarket.

Death threats accounted for 387 incidents out of the total in the first four months of 2015, slightly more than three-quarters of the incidents.

In 2012, the slaying of three children and a rabbi at a Jewish school in Toulouse by a jihadist spurred a spike in anti-Semitic incidents throughout France, possibly by those inspired by the attack to target Jews, SPCJ reported at the time. SPCJ documented more than 90 anti-Semitic incidents in the 10 days that followed the shooting.