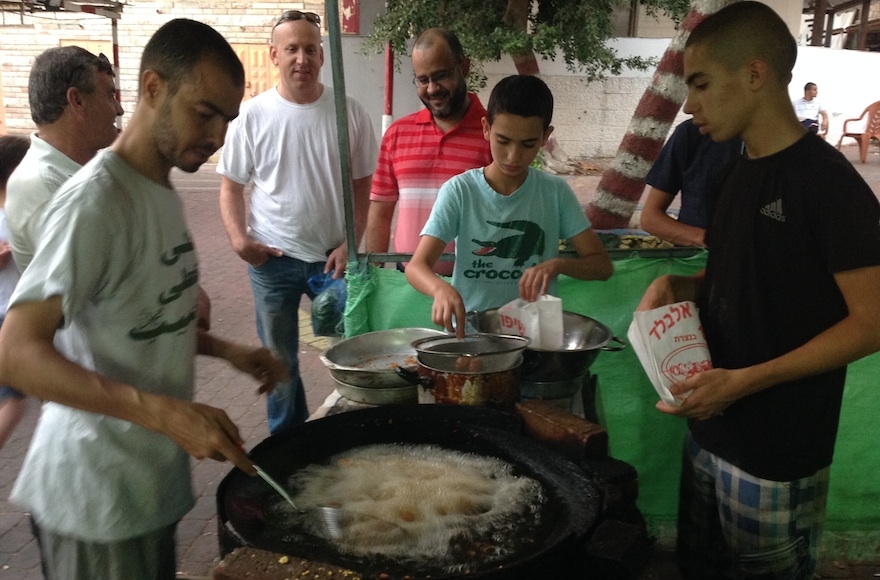 KFAR QASIM, Israel (JTA) — The group of Jewish-Israelis sat in a semicircle on the thick, red carpet of the mosque. The women wore headscarves; everyone’s feet were bare.

They had come to this Arab town in central Israel to experience a slice of Ramadan, the monthlong daytime fast observed by Muslims that ends this week. But before they left the mosque to visit Kfar Qasim’s Ramadan market — a nightly, open-air food bazaar — tour guide Shawkat Amer sounded a note of reassurance.

Amer told the crowd that just before the fast ended that evening, loudspeakers would sound calls of “Allahu akbar,” Arabic for “God is great,” across the city. Although it’s a phrase some Jewish-Israelis may associate with the final cry of terrorists before an attack, Amer urged his guests to remain calm. The call, he said, is in fact a message of goodwill.

The nearly 50 men, women and children who joined the group on Sunday night were among some 1,500 Jews who have toured Arab-Israeli cities in the past month for a small taste of iftar, the nightly meal that breaks the Ramadan fast. In spite of tensions between the groups, it’s common for Jewish-Israelis to visit Arab towns for discount shopping or Middle Eastern food. But these tours aimed to take that experience deeper by teaching about Arab-Israeli culture and religion.

“If the only narrative is a Jewish narrative and the only history is Jewish, and you just buy hummus from Arabs, that’s not good,” said Ron Gerlitz, co-executive director of Sikkuy, the Jewish-Arab coexistence nonprofit that organized the tours in Arab cities across central and northern Israel. “I don’t object to people buying hummus in Kfar Qasim, but for relations between Jews and Arabs, you need more than that.”

A city of 21,000 residents adjacent to the West Bank border and the middle-class Jewish city of Rosh Haayin, Kfar Qasim is one of Israel’s poorer towns. The Hebrew signs on the shops lining its streets are meant to entice Jewish customers.

As Koranic verses signaling the break-fast echoed across the city, the tour group flooded into an open-air food market set up for Ramadan. Merchants sold the tourists delicacies such as sticky pastries, fruit, pickled vegetables and falafel, fried on the spot in a giant pan. Part of the idea behind the tours, Gerlitz said, is to boost the Arab-Israeli economy, which has less exposure to tourism dollars than Jewish cities.

READ: A new textbook on the Israeli-Arab conflict, written by Israelis and Arabs

But the tours also aim to confront historical wounds. Near the center of town, an austere black-and-white monument that looks like an upside-down obelisk with the year 1956 emblazoned on top commemorates the Kfar Qasim massacre, when Israeli border guards killed 48 fieldworkers returning home at curfew. In 2007, then-President Shimon Peres formally apologized for the incident, but residents say they are still pained by its memory. Some said they value dialogue with Jews as a way to move past historical trauma.

The tour group “doesn’t make a difference for me — but for my kids it does, so they won’t say Jews are animals,” said Amer Amer, a vendor of pickled vegetables whose father died in the massacre. “I want Jews to feel trusted here, at home here. I don’t want them to just say, ‘Those are Arabs.’”

The tour provided few opportunities for informal conversation with residents, focusing more on basic information about Islam and Arab-Israeli culture. But Adi, a Hebrew tutor who declined to give her last name, said the group’s exposure to Arab culture and Islam was still more than Jewish-Israelis normally receive.

“I think it was at a more informative level, but as an Israeli I got more of a taste [of Arab-Israeli life] than I get day to day,” she said. “It gave more familiarity than what I’m used to.”

At the mosque visit ahead of their trip to the market, the Jewish group heard Eyad Amer, a local imam, alternate between outlining the basics of Ramadan and answering the group’s questions about Islamic worship. Was there space for women in the mosque? (Yes, in another room.) Does Islam have egalitarian movements, like Judaism? (No.) How many of the city’s 25,000 residents observe the fast? (80 percent, based on mosque attendance.)

“They just hear about extremist Islam,” the imam told JTA after the tour. “They don’t know what moderate Islam is. If we don’t talk about Islam, they’ll just have a negative outlook toward us because they’re just exposed to the dark side, not the enlightened side of Islam.”

Speaking to the group, both the imam and the tour guide complained of discrimination against Arabs in Israel. (In fact, in an interview, Imam Amer said he lived under Israeli occupation, despite being a citizen).

Still, there are hopes for improvement. A two-hour tour wouldn’t fix the longstanding challenges Arabs face in Israel, tour guide Shawkat Amer said — but he hoped that greater Jewish familiarity with Arab-Israelis could help chip away at tensions between the communities.

“I can’t fix the whole world, but even if I do 1 percent of good, it will get better and better,” he said. “The more Jewish people I bring to Arab towns, the happier I’ll be.”