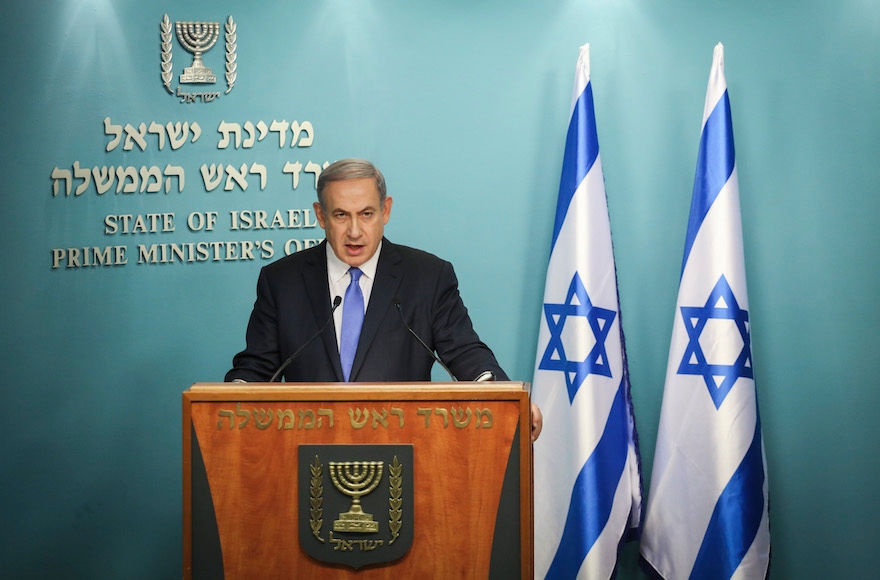 Prime Minister Benjamin Netanyahu speaks to the press from his office following the finalization of a nuclear deal with Iran, Jerusalem, July 14, 2015. (Hadas Parush/Flash90)
Advertisement

TEL AVIV (JTA) — Israeli Prime Minister Benjamin Netanyahu has decried an agreement over Iran’s nuclear program hundreds of times — most notably in a March speech to a joint session of Congress. Now that the agreement is signed, experts say Netanyahu has one way left to block it: Go to Congress again and persuade it to reject the deal.

The agreement finalized Tuesday morning in Vienna will relieve Iran of crippling international sanctions in return for Iran limiting its uranium enrichment, ridding most of its stockpile of enriched uranium and submitting to agreed-upon inspections of its nuclear facilities. The deal stipulates that Iran freeze and store — but not dismantle — much of its nuclear infrastructure, and requires inspectors to request access to some Iranian facilities before entering.

Sanctions are set to be lifted once Iran fulfills its commitments to deactivate centrifuges, restructure its nuclear facilities and transfer or dilute its uranium stockpile. Sanctions could be restored within 65 days if a committee of representatives from world powers and Iran determines that Iran has violated the agreement.

Portions of the accord will expire between 10 and 25 years from the date the accord is adopted. The United Nations Security Council is expected to endorse the accord in a resolution.

Netanyahu has made opposing Iran’s nuclear program the defining issue of his premiership, and has consistently criticized the potential agreement since negotiations began in 2013. On Tuesday, at a meeting with Dutch Foreign Minister Bert Koenders ahead of the accord’s announcement, he called the agreement a “historic mistake for the world.”

“Far-reaching concessions have been made in all areas that were supposed to prevent Iran from obtaining nuclear weapons capability,” Netanyahu said at a news conference. “In addition, Iran will receive hundreds of billions of dollars with which it can fuel its terror machine and its expansion and aggression throughout the Middle East and across the globe.”

The agreement also was criticized by Israeli opposition leaders, and the Israeli public has long been skeptical of a deal. In February, an Israel Democracy Institute poll found that 61 percent of Jewish-Israelis thought President Barack Obama would sign a deal even if the Israeli government said it harms Israel’s security.

“We should focus on the inspections regime, which is the Achilles’ heel; it’s the weakest part of the deal,” Lapid said in a statement Monday. “I started discussing the issue during my visit to Washington last month and they’re willing to listen.”
READ: Obama: Nuclear deal cuts off pathway to Iranian bomb

The only thing standing in the way of the deal’s implementation now is a vote in Congress. Senators and congressmen will have two months to parse the deal’s details, and will vote to accept or reject it when Congress reconvenes in September. Obama has promised to veto a rejection, and overriding that veto would require a two-thirds majority in both houses.

That, analysts say, is what Israel’s government will lobby for. Jonathan Rynhold, a senior research associate at Bar-Ilan University’s Begin-Sadat Center for Strategic Studies, said Israel will need to build a broad coalition of the deal’s opponents — including former members of the Obama administration — if it is to convince enough lawmakers to reject the deal.

“Israel can’t do this on its own, but if there’s a coalition of people who for their own reasons think it’s a bad deal, that could change things,” he said. “You’ve seen criticism by other people who used to be involved in policymaking by Obama.”

Republicans have staunchly opposed a deal. But while some Democrats have also voiced skepticism about the agreement, reaching two-thirds would mean convincing a sizable chunk of the party to oppose its president’s signature foreign policy initiative.

Some experts said that Netanyahu’s March speech before Congress damaged the effort to fight the deal by forcing Democratic members of Congress to choose between backing Israel and supporting Obama. But Ephraim Inbar, director of the Begin-Sadat Center, said that the speech may have helped galvanize opposition to the agreement by spelling out the dangers it poses.

Should the effort in Congress fail, some Israeli politicians have declared that there’s only one avenue left to prevent a nuclear Iran: a military strike. Netanyahu has floated the threat of a strike for years, saying that Israel has the right to defend itself by itself. Warnings of a strike built up until the nuclear talks began in 2013.

Once America was engaged in negotiations with Iran, talks of an Israeli strike subsided somewhat. But now that America has signed the agreement, Lapid again hinted at the possibility of bombing Iran’s nuclear facilities.

“If it is signed, the world needs to know Israel holds all the options,” Lapid told JTA last week. “We need to understand what all the options are. Israel can’t allow a nuclear Iran.”

Experts have assessed that an Israeli strike on Iran would not be able to destroy its nuclear program. And Kam said that Israel would be hard-pressed to launch a strike against the backdrop of a deal supported by the world’s major powers.

“I think it’s in the fridge,” he said of plans for a strike. “It’s not an option right now. To go militarily against an agreement that’s initiated by the great powers is a tough move. It’s not impossible, but it’s hard.”

But Inbar said a strike has grown more likely, as the deal has left Iran with the capability to enrich uranium, giving it the ability to produce a bomb. If that happens, he said, Israel will have no choice but to strike.

“It obligates us to a path of military attack,” he said. “The Americans don’t care about our interests. There’s no choice. We can’t wait.”