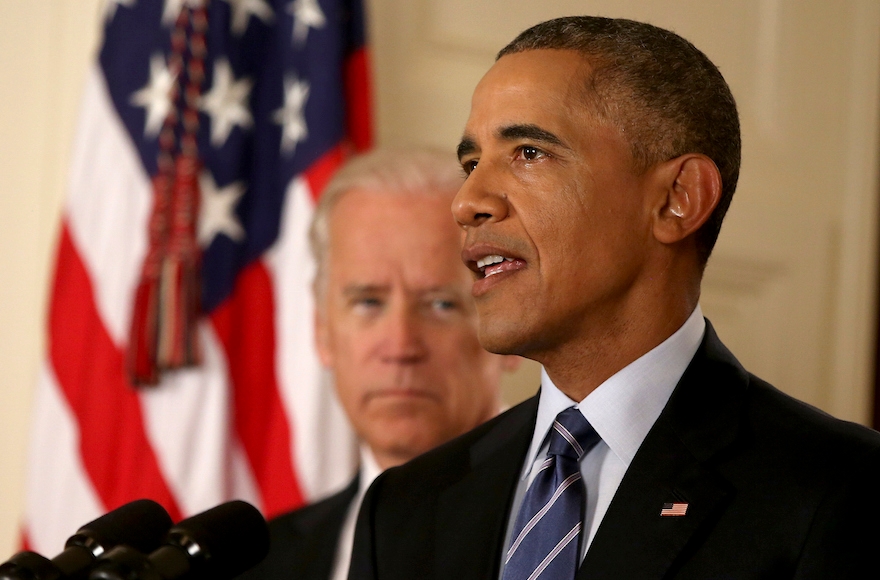 “Today because America negotiated from a position of strength and principle, we have stopped the spread of nuclear weapons” in the Middle East, Obama said in a broadcast from the White House on Tuesday morning. “Every pathway to a nuclear weapon is cut off.”

Obama said he would veto any congressional bid to derail the deal and also promised to strengthen Israel’s security.

“We will continue our unprecedented efforts to strengthen Israel’s security, efforts that go beyond what any American administration has done before,” he said, acknowledging reservations about the deal expressed by Israel and some of its Arab neighbors.

The deal now goes to the United Nations Security Council for approval. With the backing of all the council’s veto-wielding members, who with Germany negotiated the deal, it is guaranteed approval.

The agreement outlined by Obama comported with leaks to the media in the weeks leading up to the signing, with many deadlines missed, and appeared to go beyond what had been anticipated in some respects.

According to Obama, two-thirds of uranium-enriching centrifuges will be shut down and Iran will reduce its stockpile of enriched uranium by 98 percent, to a fraction of what would be needed to produce a nuclear weapon.

Some restrictions will be in place for 10 and 15 years, and others will be for 25 years, Obama said. Previously the anticipated “sunset” for time-limited provisions was no more than 15 years.

Obama said Iran would not receive sanctions relief until it had complied with nuclear rollback measures.

Additionally, U.N. nuclear inspectors will have “24-hour” access “when necessary and where necessary,” Obama said. It’s not clear what the details of such access are; skeptics had expressed concerns that Iran would be granted extensive notice of any inspection, allowing it to cover up its activities.

Iran would also agree to allow International Atomic Energy Agency inspectors access to its past activities to assess the military dimensions of the nuclear program, Obama said.