Why the Iran nuclear deal is likely to survive its hurdles 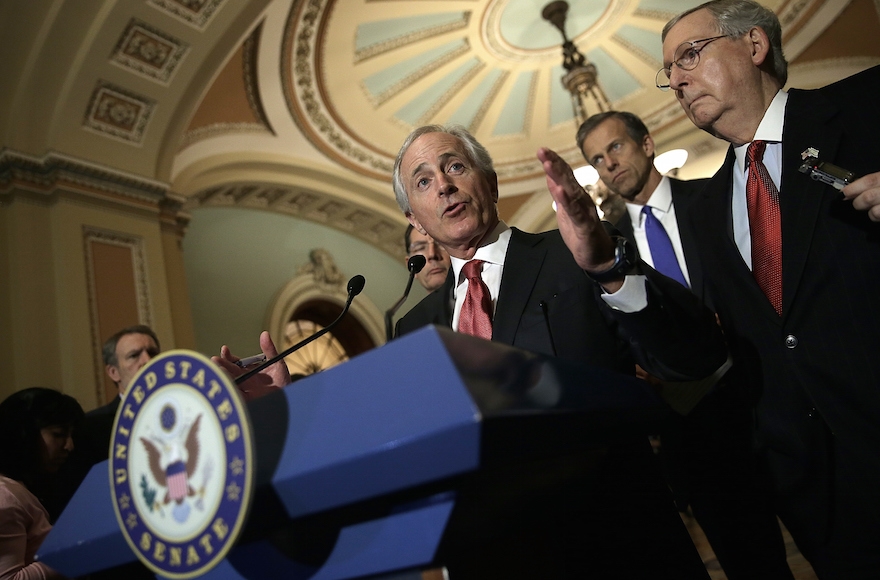 WASHINGTON (JTA) – The nuclear deal with Iran, 20 months in the making, is now done — at least as far as negotiations go. The accord, announced early Tuesday, still faces hurdles, although they likely won’t keep the deal from going ahead.

So what happens next?

We read the laws, perused the speeches, scanned the deal and canvassed congressional insiders and Iran experts. Here’s what we found out.

The five veto-wielding permanent members of the Security Council – France, Britain, China, the United States and Russia – are among the six, along with Germany, that signed off on the deal. Among the remaining rotating members, only one, Jordan, has expressed skepticism about the Iran talks.

Action: Congress by law must review the deal, but may not attempt to amend it.

Congress, by law, gets the full text of the deal within five calendar days of the agreement — by this weekend — in English, and thanks to an amendment proposed by Sen. Bob Corker, R-Tenn., the chairman of the Senate Foreign Relations Committee, in Persian as well. (The English version is already available on the Internet, so this is a formality.) Congress has 60 days to consider a deal and another 12 days to send a joint resolution to President Barack Obama, should they resolve to do so.

“In the coming days, Congress will need to scrutinize this deal and answer whether implementing the agreement is worth dismantling our painstakingly constructed sanctions regime that took more than a decade to establish,” Corker said in a statement. He and his ranking member, Sen. Ben Cardin, D-Md., co-authored the law mandating congressional review.

Leaders in the Senate and House of Representatives could bring resolutions to either approve or disapprove the Iran deal directly to the floor, but that’s unlikely: Lawmakers on both sides have talked up the need to consider closely the 50-page agreement and its 80 or so pages of annexes, so the likelihood is that the agreement will get the committee treatment.

The first hurdle is each chamber’s foreign policy committee, Corker’s and the House Foreign Affairs Committee. Cardin said he anticipates a hearing as early as next week.

The overwhelming failure of a vote to approve would not be binding, according to the law, and would allow the deal to go ahead – but it would register as a moral victory for Congress, Rep. Brad Sherman, D-Calif., a senior member of the Foreign Affairs Committee and a skeptic of some aspects of the deal, told JTA.

It would indicate the intention of Congress to allow a future president to renegotiate the deal, particularly its sunset clauses, which remove restrictions on Iranian nuclear activity after 10 and 15 years.

READ: Why critics of the Iran deal should hope Obama is like Neville Chamberlain

“That will be a signal that future congresses are not prevented from turning to Iran in years to come and say, ‘No, you cannot have an industrial size uranium enrichment process after a decade, and all options are on the table to stop you,’” Sherman said.

Should Congress consider a resolution of disapproval, there’s a chance that it would not make it out of the Senate Foreign Relations Committee, one congressional insider said. Republicans, in the majority, own 11 of its 21 seats. But among the 11 Republicans are two who have been party outliers – Sens. Rand Paul, R-Ky., and Jeff Flake, R-Ariz. – having voted against Iran sanctions in the past.

A source at a pro-Israel group acknowledged that a vote to disapprove could conceivably fail if Flake and Paul voted against it. But Paul was unlikely to jeopardize his bid for the GOP presidential nomination with a vote against disapproval, the pro-Israel source said, and among the 10 Democrats on the committee, at least one, Sen. Robert Menendez, D-N.J., was enough of a hard-line Iran skeptic to cancel Flake’s nay vote.

The next hurdle for disapproval would be cloture, the minimum 60 votes needed to end debate, and cloture may be scrapped through a filibuster. Reaching cloture would require a minimum five Democrats, which is not a high hurdle, especially if the American Israel Public Affairs Committee is rounding up votes.

Mark Dubowitz, the director of the Foundation for the Defense of Democracies, a group skeptical of the Iran deal that has consulted with Congress and the administration on the agreement, said Democrats should consider how a vote against disapproval could affect their political careers. He noted how votes for the Iraq War in 2003 derailed the ambitions of more than a handful of politicians.

With Republican majorities in both chambers and enough skeptical Democrats, a motion to disapprove will likely succeed.

Likely consequence: A veto followed by a failure to override

Obama said outright on Tuesday, in announcing the deal, that he would veto any resolution of disapproval. Congress then has 10 days to override the veto.

Congress needs two-thirds of each chamber for an override. The 246 Republicans in the House would need 44 Democrats to hit 290, or two-thirds. That’s unlikely: Rep. Nancy Pelosi, D-Calif., the minority leader known for commanding the loyalty of her caucus, has lined herself up with deal backers in her party and on Monday described the Iran agreement as “the product of years of tough, bold and clear-eyed leadership from President Obama.”

Kirk said, however, it does not rule out a congressional role in the future. Down the line, the deal requires Congress to permanently lift sanctions against Iran.

“That’s a non-starter,” he said. “There are no votes in the House and Senate for that.”