Do Jews control Hollywood — or at least the Emmys? 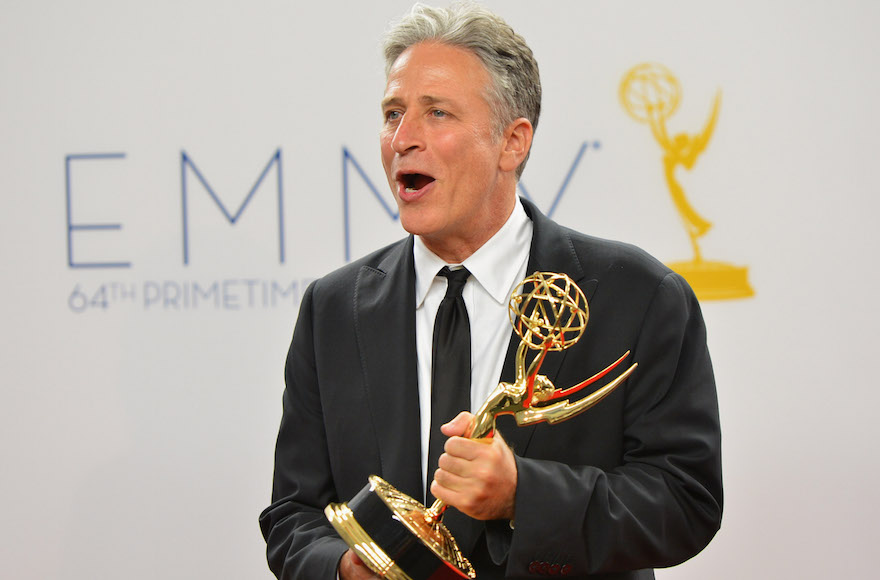 Jon Stewart at the Emmy Awards in 2012. (Getty)
Advertisement

Whoever says the Jews control Hollywood may be onto something.

Nominees for the 2015 Emmy Awards were announced Thursday, and the list reads like a “Who’s Who” of A-list Jews in the entertainment business. Among the Jewish machers who scored nominations are Jon Stewart (who’s now preparing for his final bow on “The Daily Show”), for Outstanding Variety Talk Series and Liev Schreiber, for Outstanding Actor in a Drama for Showtime’s “Ray Donovan.”

Below are some of our top picks for Jewish actors, writers and series we hope will take home the trophy this year:

These “Game of Thrones” showrunners, both Jewish, have much to kvell about: The fantastical HBO series leads the Emmy pack with a whopping 24 nominations, including for Outstanding Drama. Benioff and Weiss themselves received a nod for Outstanding Writing for a Drama Series.

Amazon’s hit streaming series, which features Jeffrey Tambor (nominated for Outstanding Actor in a Comedy) as an aging, emerging transgendered woman, is possibly the most Jewish show we’ve seen in years, with scenes from a typical American Jewish family (and a female rabbi, to boot). “It is so Jewy,” creator and executive producer Jill Soloway told the Forward last year.

Another contender for the most Jewish show on TV in recent years, Matthew Weiner’s incredible series — which nails the vibe of the 1960s down to the most minute detail — came to a brilliant close this year. Its nominations include Outstanding Drama, as well as two nominations for Weiner for Outstanding Writing for a Drama (one of which he co-wrote with Semi Chellas).

Brody shot to international fame for his Academy Award-winning performance as Wladyslaw Szpilman in “The Pianist” (and for subsequently planting a wet one on presenter Halle Berry). Now he’s up for Outstanding Actor in a Limited Series or Movie for his portrayal of one of the most famous Jews of all time: Harry Houdini (in the History Channel’s miniseries “Houdini”).

The actress, neuroscientist and Kveller contributor received her fourth nomination for Outstanding Supporting Actress in a Comedy Series for her portrayal of Dr. Amy Farrah Fowler. Mazel tov, Mayim — and to all the nominees!

The 67th Primetime Emmy Awards will be held on Sept. 20 at the Microsoft Theater in Los Angeles and broadcast live on Fox. Andy Samberg — another Jew, wouldntchaknow — will host.