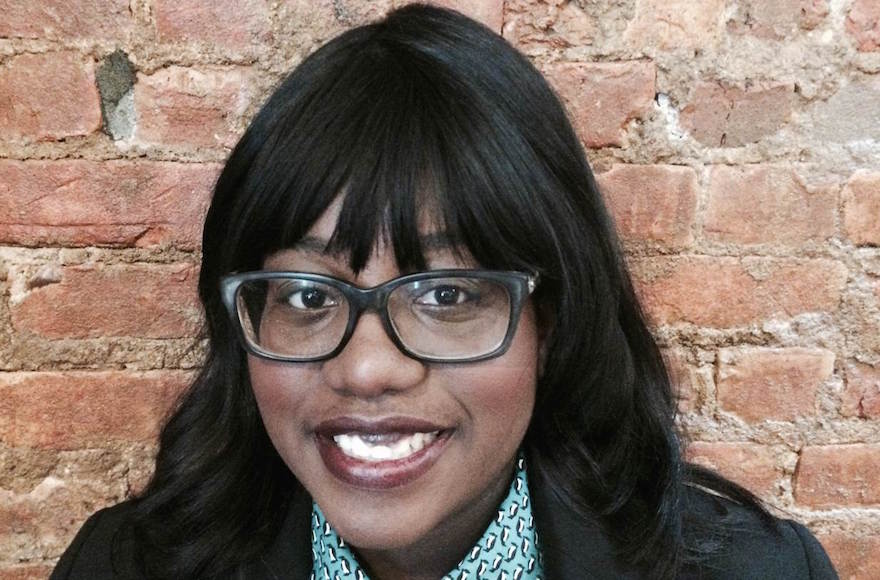 NEW YORK (JTA) – When I was 24, an Orthodox matchmaker tried to set me up on a date with a man older than my parents. When I objected, she told me, “Stop being so picky. Not many guys are willing to consider a black girl.”

As an African-American Orthodox Jew, this was hardly my first encounter with the questionable treatment I and my fellow Jews of color endure.

“Why is the goy here?” one black Jewish parent overheard when taking her child to a Jewish children’s event.

At one yeshiva in Brooklyn, the mother of a biracial student was asked to stay away from the school because it made the other parents uncomfortable.

An African-American acquaintance told me he overheard a worshiper at morning minyan talk about how he didn’t want to daven with a “shvartze” – while my acquaintance was putting on his tefillin.

Orthodox society is a beautiful community dedicated to charity, Torah learning and growth through observance of mitzvahs – and I believe we’re better than this racism suggests.

As a racial minority, it’s possible to be an integrated member of the Orthodox community, find your spouse and successfully educate your children in yeshivas – but it requires an abundance of self-confidence, tact and tenacity.

It takes confidence to keep going to synagogues when every time you show up to a new minyan you’re not sure if they’ll count you for the required quorum. It takes tact to politely rebuff yet another inquiry about your “journey to Judaism” or “why you read Hebrew so well.” It takes tenacity to keep going to kosher restaurants and Orthodox-run stores when all eyes gravitate toward you the moment you walk through the door (and stay there).

Orthodox Jews of color constantly have to demonstrate our authenticity and belonging. It’s frustrating, exhausting and, frankly, heartbreaking.

While we may not be used to seeing African-American, Latino or Asian Jews in our midst, we must treat them as we do other Jews, and create a community that is welcoming and inclusive.

It’s time to reassess our self-image. The presence of African-Americans and other racial and ethnic minorities in the Orthodox community is growing rapidly, whether born Jewish or through conversion. We need to start paying attention.

The Jewish community is hardly alone when it comes to the problem of racism, nor are racist attitudes limited to the Orthodox. But as an African-American Orthodox Jew, I feel a special obligation to confront racist behavior in my own community. A society so focused on Jewish outreach and personal growth should be especially concerned with changing behavior that alienates Jews from Orthodox observance and community.

There are many causes for the racism that exists among Orthodox Jews. Insulated to some extent from secular society, the culture of political correctness that has permeated the general culture hasn’t quite achieved the same reach inside the Orthodox world. Many Orthodox Jews live in neighborhoods where relations with African-Americans are tense, and their experiences have cemented negative stereotypes. Even good people don’t understand how their behavior may offend minorities because they have so little contact and interaction with African-Americans.

The Rabbinical Council of America noted in a report released last week on conversion reform that rabbis should advise potential minority converts that they likely will have to overcome racism in the community if they are to successfully integrate as Orthodox Jews.

“Sensitivity should be shown, as appropriate, to matters of ethnic origin as it may impact a convert’s future integration into the Jewish community,” the RCA report said.

I applaud the RCA for recognizing the problem and seeking to support minority converts.

Ignoring racism in our community runs contrary to the Torah values we hold dear. The prohibition against malicious gossip, or lashon hara, should make us sensitive about using ethnic and racial slurs. Parents of color should not have to fear having their children accepted into yeshivas or experiencing mistreatment once they are enrolled.

Reminding a Jew about their life prior to being observant or converting is a violation of Jewish law, so asking every African-American Jew “how they came to Judaism” is totally inappropriate.

Marrying and creating a Jewish family is central to Jewish life, yet matchmakers routinely refuse to set up African-American Jews on dates.

While strong and supportive in many ways, the Orthodox community is also pretty homogeneous, and dealing with difference is not one of its strengths. The organization I lead, the Jewish Multiracial Network, strives to make Jewish ethnic/racial diversity fully embraced in American Jewish life across the denominational spectrum.

Here are a few simple steps the Orthodox community can take:

First, create welcoming environments by using inclusive language and ceasing derogatory speech and the use of racial and ethnic slurs in our schools and shuls. Torah observance must result in kindness and sensitivity toward others, especially other Jews, regardless of race, or else we are perpetuating baseless hatred.

Second, and a much larger cultural adjustment, is to change the way we educate our children. Rather than denigrating outsiders as a way to elevate ourselves, we need to focus more on how everyone is created in the image of God. That’s also in the Torah. There is nothing wrong with being different, and the way we discuss differences matters greatly.

Third, refrain from quizzing Jews of color about their conversion status or biography. This is simple common courtesy, derech eretz. Imagine having to explain yourself all the time.

Orthodox Jews of color do not need a special welcome mat – just acceptance and consideration.

(Chava Shervington is president of the Jewish Multiracial Network.)
The views and opinions expressed in this article are those of the author and do not necessarily reflect the views of JTA or its parent company, 70 Faces Media.