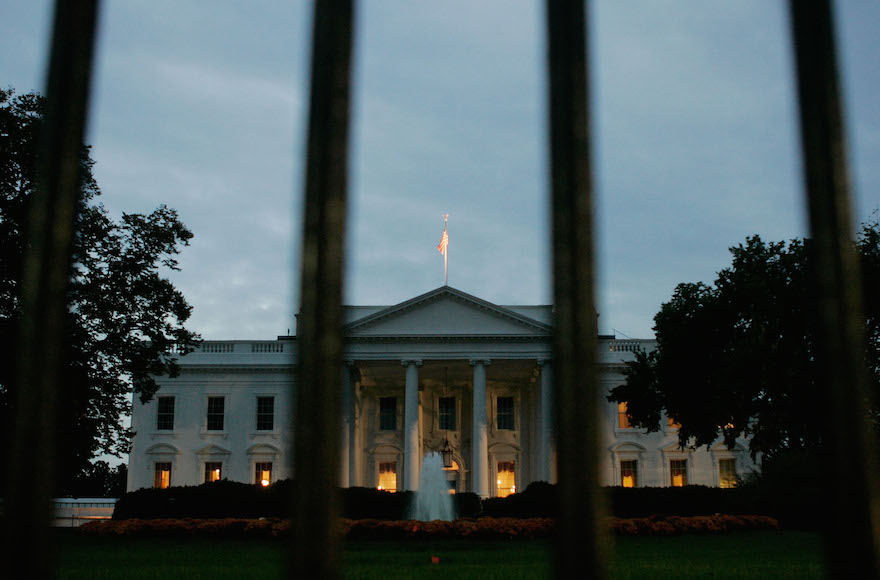 The White House is said to be "on fire" and ready for battle in defending the Iran nuclear plan. (Mark Wilson/Getty Images)
Advertisement

That was the order AIPAC’s executive director, Howard Kohr, gave his employees in a staff meeting convened this week at the American Israel Public Affairs Committee after the United States announced the Iran nuclear deal.

With the influential pro-Israel lobby group pushing for Congress to reject the deal negotiated by the Obama administration, it’s all hands on deck. Lay leaders, too, are canceling their summer plans, and AIPAC activists already are calling lawmakers and hitting synagogue listservs with appeals to can the plan.

The two months that Congress has to review the deal will feature a pitched battle pitting the Obama administration and backers of the agreement against opponents and the Israeli government.

“We’ve regularly engaged with the Jewish community in the context of these negotiations,” a senior White House official told JTA on Thursday. “And now that we have a deal, we feel it’s important to continue and even accelerate this engagement.”

Bring it on, deal opponents are saying.

“We are undertaking a major and significant effort to urge Congress to oppose the deal and insist on a better agreement,” an AIPAC source told JTA.

Since the deal was finalized Tuesday, White House officials have blitzed the Jewish community with phone calls and pro-deal talking points. On Thursday, Jewish lawmakers were asked to come to the White House for a briefing.

J Street, the liberal Jewish Middle East lobby, which has largely backed President Barack Obama in all his Middle East strategies, raised $2 million to stump for the deal even before it was announced and already has unveiled a TV ad.

The group’s president, Jeremy Ben Ami, who routinely bristles when J Street is likened to AIPAC, insisting that they play different fields, on Wednesday embraced a fight with the older and larger lobby. Asked on MSNBC whether he was going “toe to toe” with AIPAC, he said, “Essentially we are.”

For his part, AIPAC’s Kohr distributed a phone script on Thursday morning to AIPAC’s tens of thousands of activists directed at members of Congress.

“I am calling to urge the senator/representative to oppose the Iran nuclear deal because it will not block Iran from getting a nuclear weapon,” the script says.

The Israeli government is sending officials to Washington to campaign against the plan, starting next week with the opposition leader, Zionist Union chief Isaac Herzog – a bid to show the wide breadth of Israeli opposition to the plan.

Additionally, according to multiple sources, Israeli Prime Minister Benjamin Netanyahu has made clear to his U.S. counterparts that he will reject all U.S. overtures to discuss additional U.S. defense assistance to offset any expansion of regional Iranian influence until he is certain all avenues to killing the deal are unavailable.

Caught in the middle are the 28 Jewish lawmakers in the U.S. House of Representatives and the Senate. Jewish lawmakers usually are AIPAC’s first avenue of access when they take on a major initiative. Yet the lawmakers, all but one of whom caucus with Democrats, also have been under pressure by the administration to back the deal.

Under a law passed earlier this year, Congress must review the deal achieved Tuesday in Vienna between the major powers and Iran, and may disapprove it. If a resolution of disapproval succeeds, Obama has said he will veto it, in which case congressional leaders may submit the deal to an override vote. That would require two-thirds of each chamber to vote no on the deal – a long shot.

On Thursday morning, Ben Rhodes, a deputy U.S. national security adviser, convened a meeting at the White House of Jewish lawmakers in the House of Representatives. About 15 of the 18 attended, and some were uncharacteristically silent about how it went.

“Congressman Israel has said it was a very informative meeting,” was all Caitlin Girouard, spokeswoman for Rep. Steve Israel of New York, would say after the meeting. Israel signs his statements the “highest ranking Jewish Democrat” in the House.

Hillary Rodham Clinton, the front-runner for the Democratic presidential nomination, said this week that she was unequivocally in favor of the deal.

Pro-Israel insiders point to what they describe as White House love bombs to Israel: In addition to leaking to Jewish community leaders the Obama administration’s spurned offer to increase defense assistance to Israel, they note statements like that of Wendy Sherman, the undersecretary of state, who on Thursday in a phone call with Israeli reporters praised Netanyahu for helping to make the deal tougher on Iran by assuming a bad cop role.

AIPAC is planning on meeting with lawmakers at their district offices during the summer break and bringing in activists to Washington, D.C., when Congress reconvenes in September. Congress has until mid-September to decide whether it will vote the deal down.

Jewish sources close to the White House say the Obama administration is “on fire” and ready for the battle. Tony Blinken, the deputy secretary of state, led a call with Jewish organizations on Tuesday just six hours after the deal was announced. There have been more intimate calls with Jewish supporters of the president.

Also within hours of the deal, the White House distributed talking points arguing that the deal hews to and even improves upon five markers laid down by the Washington Institute for Near East Policy, an influential think tank that has historic ties to the Jewish community.

AIPAC twice has pulled out all the stops in taking on a president – and lost both times. In the early 1980s, the lobby opposed the Reagan administration’s sale of advanced military aircraft to Saudi Arabia. And a decade later, AIPAC opposed President George H. W. Bush’s linkage of loan guarantees to Israel to restraint on settlement building in disputed areas.

AIPAC insiders say they know they might lose this time, too, but say they have little choice given the existential threats they believe the deal poses to Israel. Additionally, they say, galvanizing opposition to the deal now will show the Iranians that the U.S. political establishment remains wary of the agreement, and in the event that it is approved will insist that Iran hew to every one of its provisions.