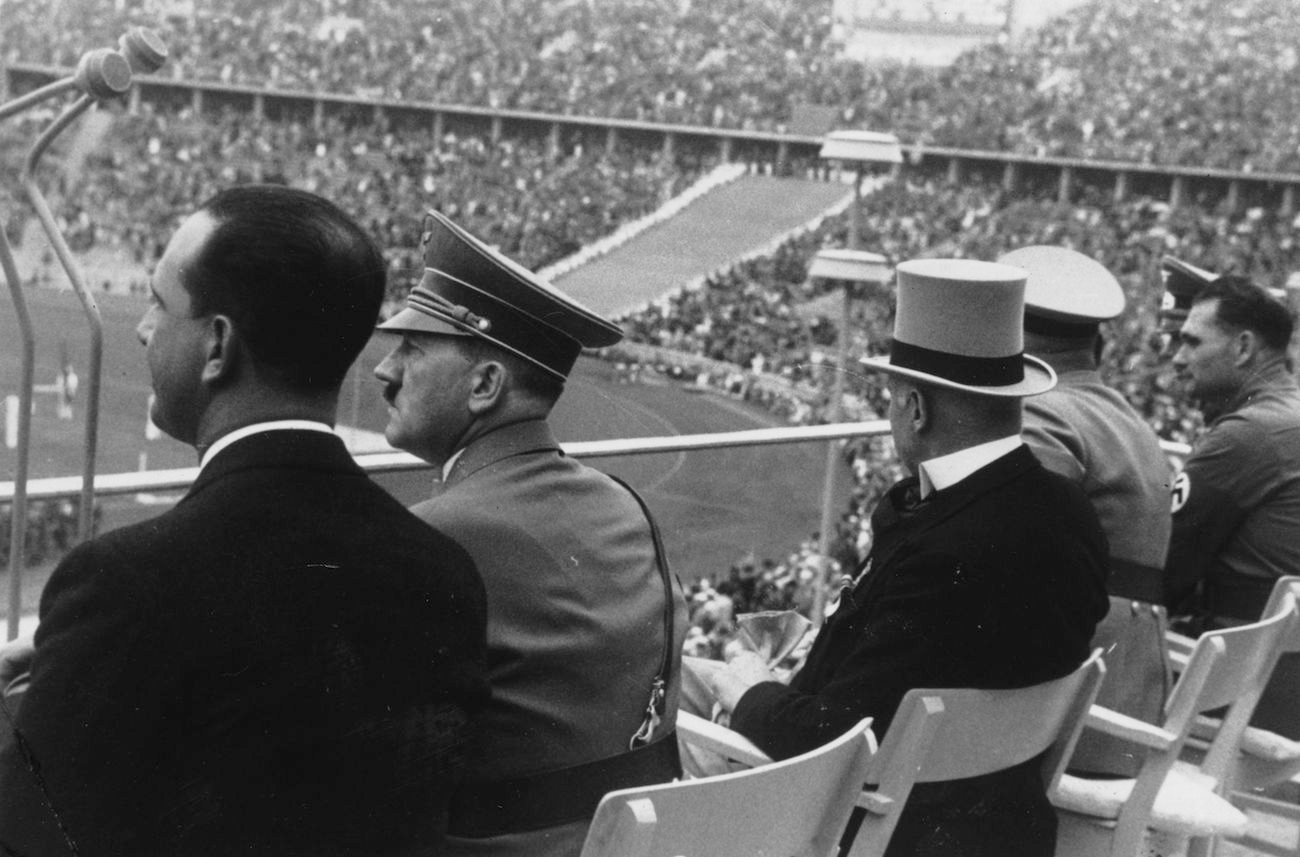 BERLIN (JTA) – They are roaring through Europe, raising dust as they go: Jewish bikers bearing an Olympic-style torch all the way from Israel to this German city.

Next week, 11 core riders will pull their steel steeds into Berlin’s famous outdoor amphitheater, the Waldbuehne, to help usher in the 14th European Maccabi Games — the first ever in Germany — at a venue built by the Nazis for the 1936 Olympics. Other competitions will be held at the Olympic Stadium here, where Hitler presided over the opening of the games that year.

The riders are following in the treads of the Maccabiah Riders, who rode through Europe in the early 1930s to promote the games then being held under British mandate in Palestine.

The July 28 opening ceremony, which will feature remarks by German President Joachim Gauck and a concert featuring Matisyahu, Dana International and others, will usher in 10 days of sports, parties, a Limmud Germany learning event and more. Some 2,300 Jewish athletes from 36 countries will take part, cheered on by fans bused in from across the country by the Central Council of Jews in Germany. And the sports venues, including Berlin’s Olympiastadion, will be open to all, free of charge and under heavy security. 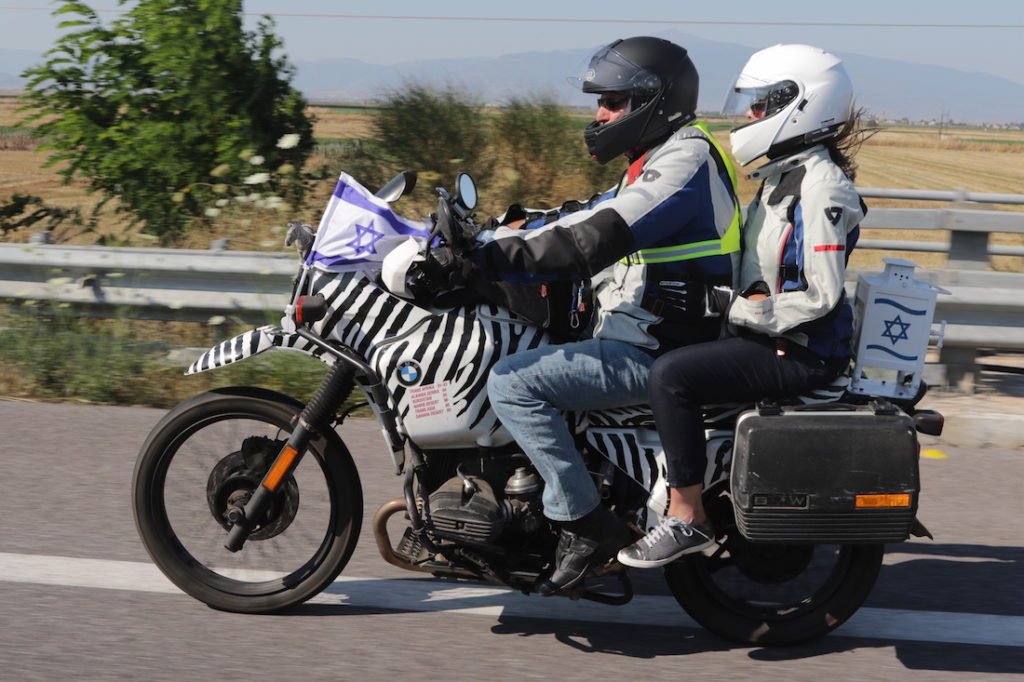 Elen Katz and Catherine Lurie-Alt participating in a motorcycle rally from Israel to Berlin for the opening of the European Maccabi Games. (Yosef Alony)

Athletes will compete in 19 sports, as well as a few exhibition games pitting Jewish athletes against German soccer and basketball stars. On July 31, they will try to break the Guinness World Record for the largest kiddush ever.

The European Maccabi Games grew out of the Maccabi movement, which traces back more than a century to Turkey when Jews, then shut out of local sporting clubs, founded the Israel Gymnastic Club in 1895. Jews elsewhere followed suit.

The first European Maccabi Games were held in Prague in 1929, and the second a year later in Antwerp. But with the rise of the Nazis, Jewish sports associations were banned. Germany’s Makkabi Club was reinstated only 50 years ago.

In 1969, the quadrennial competition resumed, alternating every two years with the Maccabiah Games in Israel.

“People told me they never could imagine setting foot in Germany because their parents and grandparents were sent away from there,” said Meyer, 41, a Frankfurt businessman whose father fled Nazi Germany for Palestine. “Now these people are coming back to see the changes [and take part in] the biggest Jewish event ever held on European ground.” 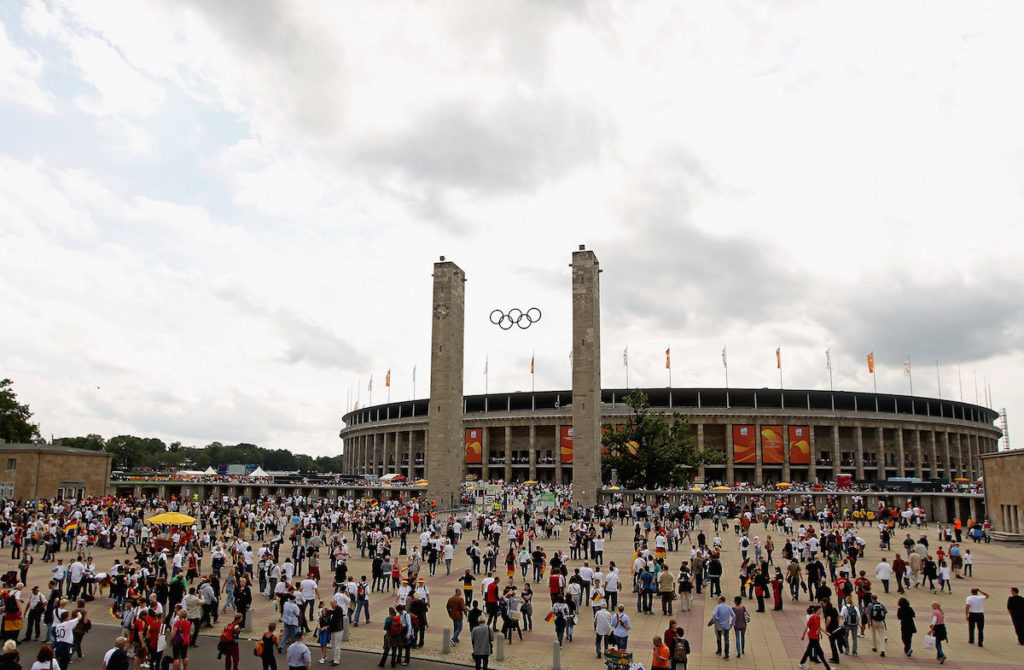 The Berlin Olympiastadion was built for the 1936 Olympic Games. (Scott Heavey/Getty Images)

The change to which Meyer referred is the dramatic growth in Germany’s Jewish population. Only a few thousand of Germany’s prewar Jewish population of 500,000 remained in Germany after the Holocaust. Today there are some 240,000 Jews here, most of them immigrants from the former Soviet Union. Membership in Jewish sports clubs has grown, too.

Meyer wanted the competition to be held in the Olympic Stadium, those same stone halls where many Jewish athletes, though not all, were banned in 1936.

“They came all the way to Germany and in the morning they got a call, they were not allowed to run. They found out right before the race,” said Steven Stoller, 64, of New Jersey, a distant cousin of the late Jewish-American sprinter Sam Stoller, who was told he could not compete by Avery Brundage, then president of the U.S. Olympic Committee.

“I wanted to come to Berlin for my children, my future grandchildren, to have the story live on,” Stoller said.

Jed Margolis, the executive director of Maccabi USA, will fly in from Philadelphia to cheer some 200 participating American athletes aged 15 to 85.

“At one point in life I would say, ‘I will never go to Germany or buy a German product,’” Margolis said. “Yet there is a vibrant and growing Jewish community there. We want to support them and at the same time teach our next generation” about what happened there.

Security will be tight for the event, in the stadium and beyond. Berlin announced the creation of a new digital reporting system for anti-Semitic incidents just in time for the games.

“Security is the No. 1 priority,” said Lena van Hooven, spokeswoman for the games.

But Danny Maron is not worried. He and the other Jewish bikers have been traveling through Eastern Europe with Israeli flags attached to their bikes.

Maron’s father, Yoram, a Holocaust survivor, told JTA that he wanted “to show the whole world that after all the death, we are still alive, and we keep moving.”

At each stop, from Athens to Romania to Krakow, more Jewish bikers have woven into the pack. The Maccabi torch itself rides in a specially built case carried by Greek biker Kobi Samuel, 48.

“Two of our riders are descendants of actual Maccabi riders of the 1930s, nine are descendants of Holocaust survivors, and two of our bikers are actual survivors aged 73 and 78,” said filmmaker Catherine Lurie-Alt, who snagged Jewish talk show host Larry King as the narrator for her documentary about the motorcycle rally.

“This is where it all started,” Lurie-Alt said. “We are going through communities where Jewish populations were decimated, on our way to Berlin, where they will enter that stadium with jubilation and joy.”