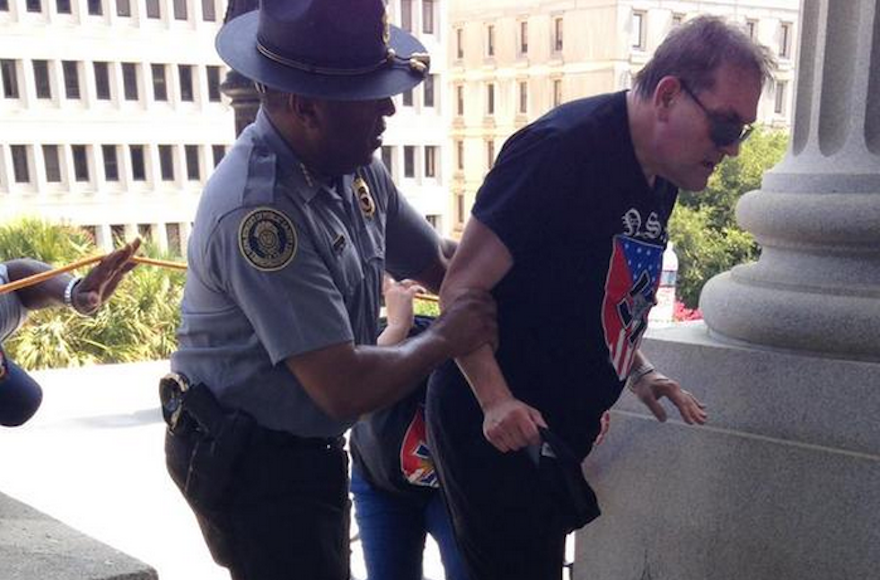 American police officers have had a hard time in the public eye over the past year, but one officer’s act of kindness did not go unnoticed.

African-American officer Leroy Smith, who heads South Carolina’s Department of Public Safety, helped a white neo-Nazi protestor to shade on Saturday when he looked faint in the 100-degree heat.

A photo of Smith helping the man — who was wearing a shirt with a swastika on it and demonstrating with the Loyal White Knights of the KKK group — quickly went viral on Twitter.

“He was struggling, fatigued, appeared to be lethargic. I knew there was no way he could make it up the steps [of the South Carolina Statehouse] on his own,” Smith told the The Associated Press.

The white supremacist and neo-Nazi group was demonstrating last weekend outside the Statehouse just a week after the Confederate flag was removed from the premises in the wake of the murder of nine people in a landmark black Charleston church. Tensions were high between the KKK and counter-protestors behind police barricades.

Gov. Nikki Haley’s spokesman, Rob Godfrey, was watching the protest from the Statehouse when he snapped a cellphone photo of Smith helping the man. He quickly posted it to Twitter, where it has received hundreds of thousands of views and been picked up by international news media.

not an uncommon example of humanity in SC: Leroy Smith helps white supremacist to shelter & water as heat bears down. pic.twitter.com/GoF23r3mRe

Smith said the man was actually the second demonstrator he helped up the Statehouse steps that day.

The man in the photo, who could not be identified, was a member of the National Socialist Movement, the largest neo-Nazi group in the country.

Smith told the AP that he’s been overwhelmed with reaction to the photo, which has been viewed hundreds of thousands of times around the world.