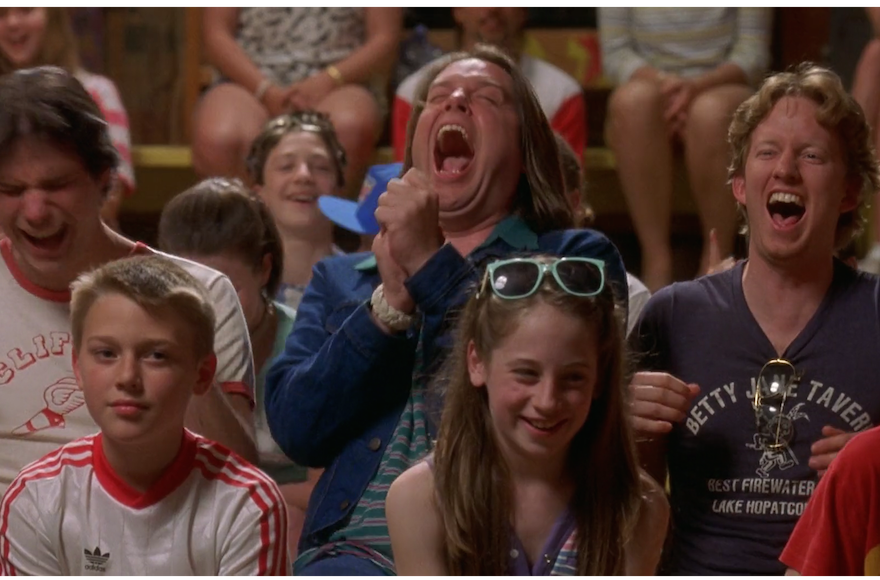 The crowd reacts to the comic stylings of the camp talent show MC in a scene from "Wet Hot American Summer." (Screenshot)
Advertisement

Camp Firewood isn’t an observant place, but it’s chock full of Jews — there’s even a camper named David Ben-Gurion. The movie is reportedly based on director David Wain’s childhood experience as a camper at Jewish Camp Modin in Maine.

Whereas the movie follows the impossibly eventful and dramatic final day of camp in 1981, viewers will this time arrive with the campers on day one.

The same star-studded staff will be there to welcome them, including Bradley Cooper, Amy Poehler, Elizabeth Banks and Paul Rudd. Jon Hamm, Kristen Wiig and Jason Schwartzman are among the new hires.

As a generation of Jewish summer campers will recall, the movie isn’t afraid to get weird and raunchy — with pubescent tongue mashing, talking canned vegetables and triumphant refrigerator humping being just a few examples.

But many of the best moments are good old-fashioned Jewish jokes.

If you can’t wait for the premiere, check out the trailer for a quick fix (afternoon-away-from-camp style). Fair warning, though, the video will only leave you craving more. The link and the video contain graphic content.