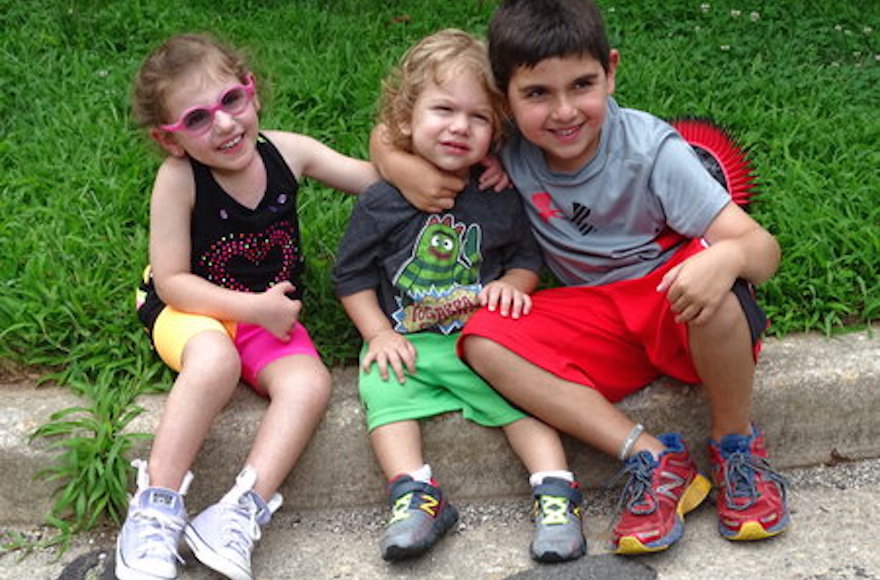 POTOMAC, MARYLAND (Washington Jewish Week via JTA) — Four-year-old Jamison Eberstein squeals with delight as she practices walking down the driveway. She enjoys all things princess and listening to her mother read “Pete the Cat” books. Particular about her outfits, she won’t be dressed in anything she doesn’t love.

Jamison weighs just 29 pounds and has yet to reach 3 feet tall. She wears pink glasses, uses a walker, needs a feeding tube for nutrition and is nonverbal.

Because she was born with a rare disorder called Cockayne syndrome, she is aging much faster than other people. She may suffer from hearing loss and cataracts when she is still a child. While her life expectancy is hard to determine, given how few children have the incurable degenerative syndrome, she may only live to be an adolescent or young adult.

“There is no funding, no treatment, no pharmaceuticals, and no cure — just nothing,” said Jamison’s mother, Nikki Herson Eberstein of Potomac, Maryland. All she can do is encourage her daughter’s natural enthusiasm for life.

“There is nothing about this child that is not joyful. She is happy. She is fun. In a word, she is joy,” said Eberstein.

When her motor skills seemed delayed, Eberstein had her medically tested and was told Jamison, then 2 years old, had brain damage and probably cerebral palsy. She had regular MRIs to check her brain.

Then a new doctor advised the family to undergo a $25,000 test. Eberstein balked, but the doctor insisted. That is how she and her husband, Jason Eberstein, learned that their daughter had a medical condition that neither they, nor anyone they knew, had ever heard of.

“The frequency is one in a million throughout the world,” said Dr. Kenneth Kraemer, chief of the DNA repair section at the National Cancer Institute, part of the National Institutes of Health, in Bethesda, Maryland.

Nikki Eberstein said she initially refused to accept the diagnosis. “I don’t do ‘no.’ ‘No’ is not really part of my vocabulary,” she said.

Eventually she turned to the Internet, where she found the Share and Care Network, which helps guide people who have a family member with Cockayne syndrome. She proceeded to contact every doctor on the network’s list in search of solutions. “I reached out to every single one of them. Nothing. There really was nothing,” she said.

So that someday other families won’t face the same hard reality, Eberstein organized a fundraiser on July 10, at Woodmont Country Club in Rockville, Maryland. She went at it like it was a bar mitzvah celebration, with lights, music and food.

“This is an incredibly sad disorder, and I don’t want this to be sad,” she said of the party, which raised more than $175,000 for research of the syndrome.

Both of Jamison’s parents carry a defective gene. These genes provide instructions for making proteins that are involved in repairing damaged DNA. While the Ebersteins may have different genetic abnormalities, for their child to have Cockayne syndrome, the affected gene must be the same, Kraemer said.

There isn’t much that can be done for Jamison, but research in the laboratory is progressing, said Dr. Kraemer. The National Institute of Aging is testing mice that have Cockayne syndrome. Adding different cells to the affected gene “seems to help the mice,” he said.

Clinical trials on people have not yet been attempted, but the syndrome can be diagnosed prenatally by examining amniotic cells cultured in vitro.

During the school year, she is in a program at Forest Knolls Elementary School. The Eberstein family, which has grown to include 17-month-old Grayson, attends Congregation B’nai Israel in Rockville.

To other parents who learn their child has Cockayne syndrome, Eberstein’s advice is simple. “When the doctors and professionals know nothing about it, it becomes very challenging. You become literally your own advocate. Hang in there.”