Out of the ashes of the Holocaust, a haunting tribute to ‘Vertigo’ 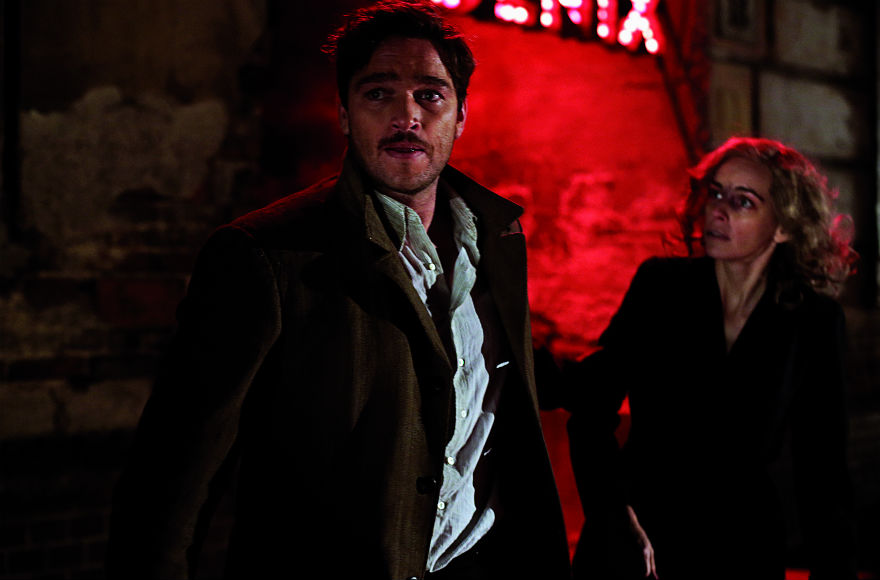 (JTA) — “Homage” is a French word that frequently and unfortunately translates into English as I don’t have a good idea of my own, so I will borrow one of yours and call it a tribute.

Fans of Alfred Hitchcock will be delighted, however, with “Phoenix,” German director Christian Petzold’s suspenseful take on “Vertigo.” He offers a fresh twist on mistaken identity that ultimately leads to a denouement that’s as dramatically, emotionally and intellectually satisfying as the master’s.

Not that Petzold is a slouch in the master’s department. His most recent film, “Barbara” — about an East German physician torn between her duty to a patient and her long-planned escape to the West — earned him the best director nod at the Berlin Film Festival and was Germany’s entry in the 2013 Academy Awards. His other works, “Jerichow” and “Yella” among them, have made him a darling of the indie crowd.

Here he reunites again with his muse, Nina Hoss. They’ve done six pictures together, and her appearance in “Yella” earned her both a German Oscar and the best actress award at the Berlin Film Festival. (She also generated buzz with her duet with Manic Street Preachers at England’s famed Glastonbury Festival last summer.)

In “Phoenix,” Hoss plays Nelly, a chanteuse and Jewish survivor of Auschwitz. When we meet her, in 1945 Germany, Nelly is a passenger in a car, her face covered by bloody gauze — the result of a gunshot wound. The driver, Lene (Nina Kunzendorf), has taken charge of her life.

Lene has organized temporary quarters for them in Berlin, with plans for more permanent housing in Palestine. She has also arranged for a plastic surgeon to reconstruct Nelly’s damaged features.

The physician provides her a catalog of movie stars and the opportunity to create any face she wants to start life anew. But Nelly doesn’t want to start over. She wants to replicate her old self, or as close as possible.

Nelly also isn’t interested in going to Palestine. More than anything she wants to reunite with Johnny (played by Ronald Zehrfeld), her Christian husband and former accompanist. Once Nelly has recovered from surgery — the operation results in the approximation of her former face, not a carbon copy — she finds him in a Berlin nightclub called Phoenix, his piano-playing days past. He’s now a busboy, but one with plans.

Johnny believes his wife is dead and he is scheming to claim her considerable inheritance. When he spies Nelly, whom he thinks closely resembles his wife but cannot actually be her, Johnny hatches a plan: He will give her a makeover, show her how to forge her signature, teach her a new walk. Once Johnny has “remade” her as his wife, they will claim her family’s cash.

Nelly, however, isn’t keen to reveal her true identity. Lene has told her that Johnny betrayed her to the Nazis in exchange for his own freedom. Nelly, pretending to be a stranger, wants to discover the truth. This creates the potentially comical situation of Johnny training a woman who actually is his wife on how to act like his wife.

Conversely, Nelly is trying hard to hold in check actions that would give her away as the real deal. In fact, listening to Johnny describe life with his wife, Nelly says she actually becomes jealous of herself.

But there are no laughs here. Instead, the viewer is likely to concentrate on Hoss’s nuanced and restrained performance. At first, every physical gesture she makes reflects a camp survivor: her slow gait, small steps, walking bent over as though she wants to escape the guards’ notice.

Nelly’s interactions with Johnny are eerily similar; she’s checking her emotions so he’ll have no idea of who she really is. Then gradually, under his tutelage, she starts to transform more into the woman she was before the war — a metaphor, perhaps, for all Holocaust survivors.

Cinematographer Hans Fromm does wonders with darkness and light to accentuate the film’s varying moods, and production designer K.D. Gruber does marvelous work to re-create a war-ravaged city.

Ultimately, though, credit for the success of “Phoenix” belongs to Petzold. Yes, there are questions that remain unanswered along the way to the film’s satisfying and surprising conclusion (for example, would a man truly not recognize his wife?), but Petzold’s brisk pacing doesn’t leave time to ponder such questions. Instead, in a world of Marvel and Pixar, we can be awed by his rare creation: a movie for adults.

(“Phoenix” is playing in New York and opens in Los Angeles on July 31; the nationwide release follows.)