Why is a thriving Boston-area synagogue spending $15 million – to downsize? 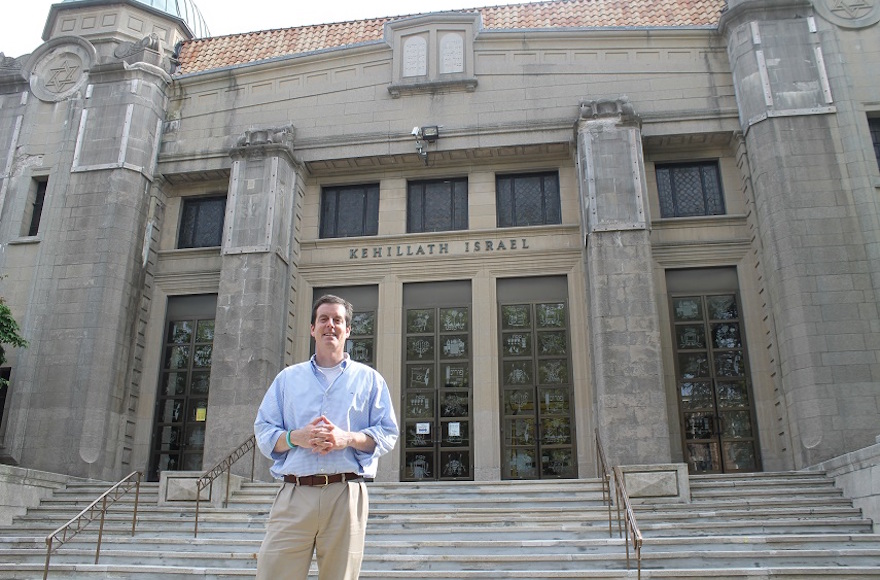 While many other area Conservative congregations are shrinking, membership at KI is growing. The 430-member synagogue has a thrice-daily minyan and hosts three different services on Shabbat mornings; a fourth is slated to be added this fall. KI is also home to several Jewish agencies, has a growing preschool and for the third year in a row is running a budget surplus.

Now the 98-year-old synagogue on Harvard Street is about to embark on a radical renovation plan that might seem counterintuitive: It is downsizing.

The first phase, which will cost $15 million and is scheduled to begin next summer, is all about making the facility more flexible. The fixed pews in the sanctuary will be yanked out and replaced with stacking chairs, and moveable walls will be installed to make the space useable for purposes other than worship. In phase two, Jewish senior housing will be built on the site, creating a significant long-term revenue stream. Overall, the building’s footprint will decrease slightly, to 53,000 square feet from 55,000, excluding the senior housing facility.

It’s all part of an unconventional master plan designed to position KI for future success – or decline.

“We’re very mindful of what’s happening to suburban synagogues across the American Jewish frontier that have found their synagogues to be very costly and challenging to maintain, and we’re doing everything possible to hedge against that,” the synagogue’s rabbi, Bill Hamilton, told JTA. “We know that life won’t always be this way and things will change. Hopefully we’ll have left the people who follow us with a campus that is versatile enough and endowed enough financially to serve future generations.”

With Reform and Conservative affiliation on the decline, large urban and suburban synagogues across the country are facing some stark choices. Built during the good times of the early and mid-20th century, many have become burdens to shrunken congregations now too small to afford their upkeep. Synagogues with sanctuaries built to seat 1,500 or more may barely see 100 worshippers on Shabbat, and many congregations now use their sanctuaries only on High Holidays or special occasions. And if current trends hold, the worst is yet to come.

KI is one of four non-Orthodox synagogues in the Boston area in the midst of making major changes that reflect how synagogues are trying to adjust to these trends. 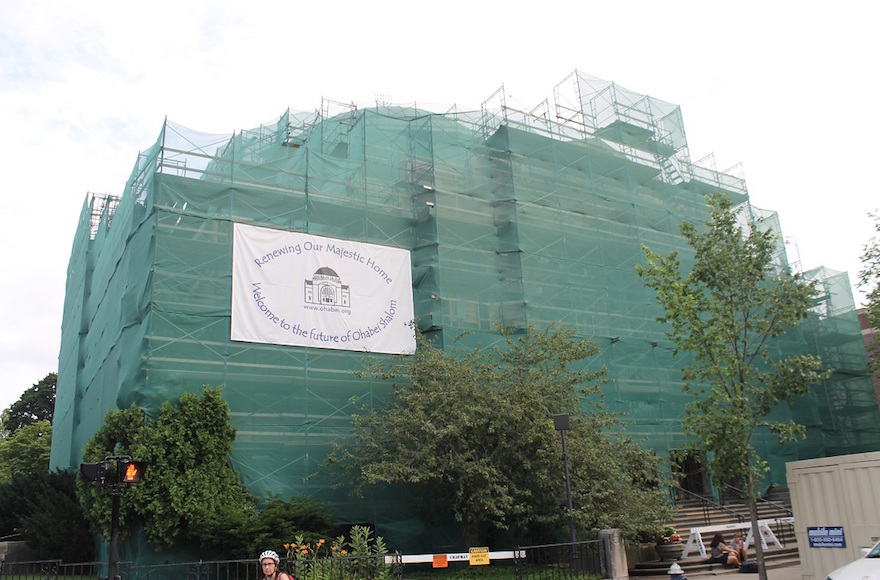 Temple Ohabei Shalom’s sanctuary renovation will reduce the seating capacity from 1,700 to about 1,400. (Uriel Heilman)

Just blocks from KI, Massachusetts’ oldest congregation, the Reform Temple Ohabei Shalom on Beacon Street, has turned to rental income for survival. Five years ago, the synagogue built an addition that generates revenue by renting space to a local public preschool. Now the 350-member synagogue is fixing its roof and updating its 1,700-seat sanctuary as part of a $2.3 million renovation project it hopes will make the massive sanctuary more attractive for rentals to cultural institutions and universities.

“We need outside rental income in order to sustain this building,” said Ohabei Shalom’s rabbi, Sonia Saltzman. “We can’t do it just from the membership.”

A few miles away, in the Chestnut Hill neighborhood in south Brookline, the Conservative Temple Emeth is pursuing an if-you-build-it-they-will-come approach. The shul just began a $1 million renovation to raise ceilings, brighten hallways, increase handicapped accessibility and upgrade the 67-year-old building’s roof and air-conditioning systems. Additional renovations totaling $2 million are on the drawing table. 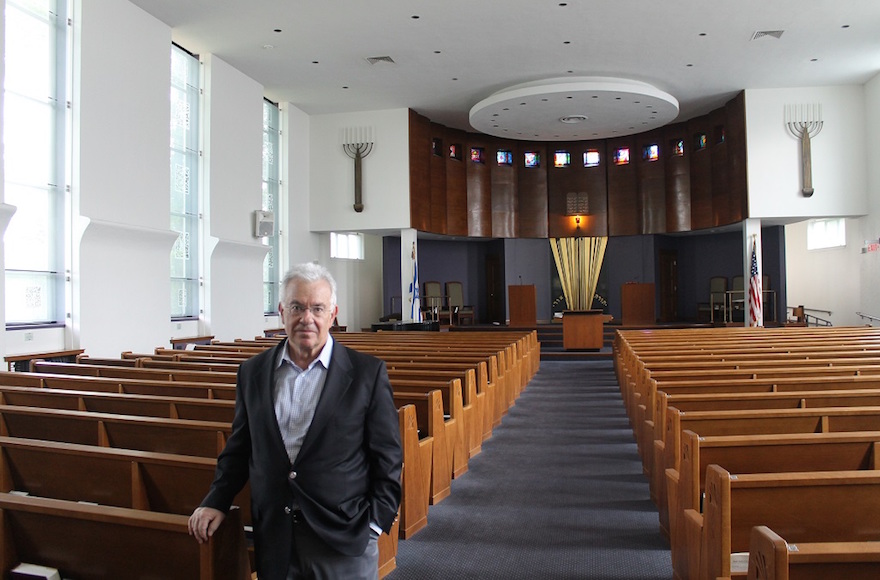 “It’s going to be a much brighter office, which fills people with optimism,” Rabbi Alan Turetz told JTA. “We decided this is a good time to put our best face forward, and we timed it to our 75th anniversary.”

Temple Emeth has tried this approach once before. In 2005, a $1.5 million renovation updated the sanctuary while slightly shrinking its size, but it failed to arrest the slide in membership. Since then, the synagogue has merged its weekday minyan with another struggling Conservative synagogue and combined its supplementary religious school with those of two other synagogues. To capitalize on its unused space, Temple Emeth rents part of the building to a local public preschool and sometimes to the popular Chabad across the street.

Mishkan Tefila, the Conservative synagogue that shares a weekday minyan and religious school with Emeth, may not survive at all. One of the largest synagogue properties in Massachusetts, Mishkan is entertaining bids to sell off some or all of its 23-acre property. Though Mishkan’s sanctuary seats 800 and can be opened up to seat 2,000, the synagogue barely has 300 members.

“We need to do something to secure a long-term future because there are not that many young families in the Newton area right now,” Mishkan’s rabbi, Leonard Gordon, told JTA. “For Mishkan to thrive in a new iteration, it would have to be more than a local synagogue. It would have to be an institution that’s open seven days a week with programming and outreach. It would have to become a destination synagogue.” 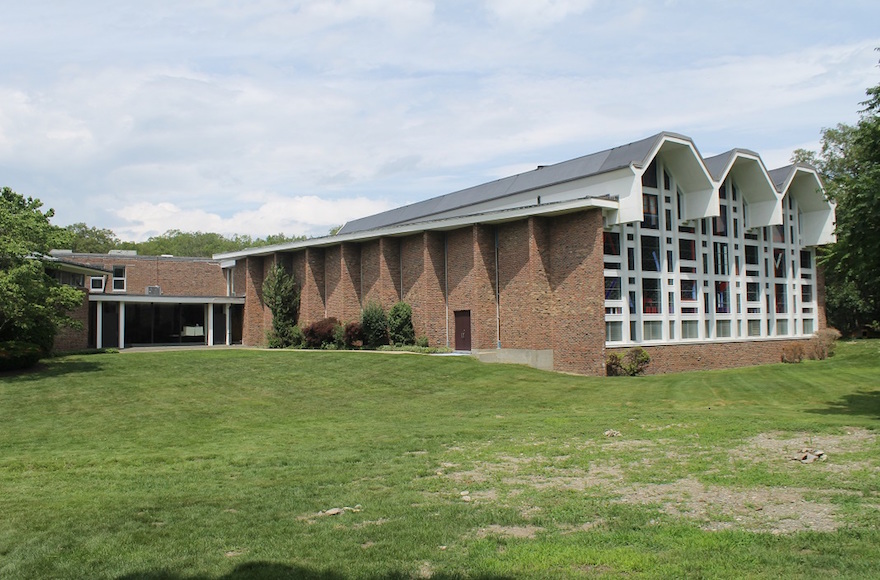 Located in semi-urban Brookline, which abuts Boston, KI already has succeeded in becoming a destination – not just for synagogue members but for the wider community. The synagogue has welcomed two independent minyans into the building on Shabbat (both of which seat the sexes separately, one with a mechitzah barrier and one without) and adopted many of the best practices of independent egalitarian minyans in the shul’s main Shabbat service, including lay-led prayers, abundant singing and traditional liturgy.

The congregation also serves as home to a couple of Jewish start-ups and the regional offices of an Orthodox organization, Yachad, which works with the disabled. KI charges only token rent to these groups. Its sole genuine tenant is the Dancesport Academy of New England, which rents out the social hall during the week.

While KI may be bucking the Conservative movement’s downward trend for now, the synagogue’s master plan demonstrates how it is simultaneously trying to accommodate its current vivacity while also preparing for a future that may not be as bright.

The plan – for which over $8 million has been raised, including from Patriots owner Robert Kraft – includes additional income streams: The Jewish Community Housing for the Elderly facility will hold a long-term lease on the site, and a new synagogue social hall better suited to wedding rentals will be constructed over most of what is now a garden. The renovation will also make the building more handicapped-accessible and energy efficient.

“This is a complete rethinking of what a synagogue can be,” said Jonathan Sarna, a KI member and professor of American Jewish history at Brandeis University. “The different institutions maintaining their integrity and identity but all interacting together will be a very significant experiment to watch.”