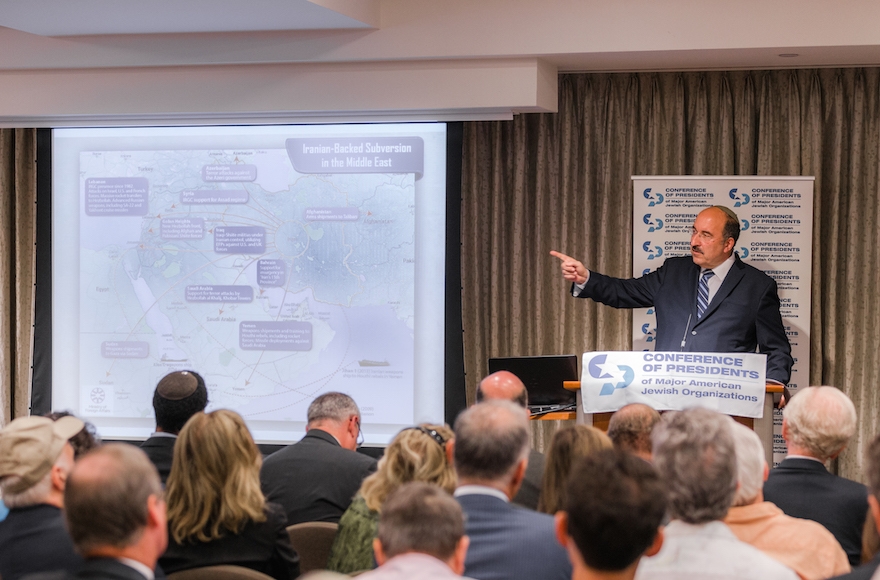 Gold used the term twice in a presentation Wednesday in New York focused on the shortcomings of the Iran nuclear deal.

Gold, a former Israeli ambassador to the United Nations and a longtime adviser to Israeli prime ministers from the right-wing Likud Party, is also the author of a 2003 book on Saudi Arabia called “Hatred’s Kingdom: How Saudi Arabia Supports the New Global Terrorism.” Saudi Arabia has been one of the most vocal Arab opponents of U.S.-Iran rapprochement and the Iran nuclear agreement.

The presentation, which was organized by the Conference of Presidents of Major American Jewish Organizations, also featured Amos Yadlin, a former chief of Israeli military intelligence who now heads Tel Aviv University’s Institute for National Security Studies. Yadlin ran unsuccessfully for the Knesset in March on the center-left Zionist Union list.

Both Yadlin and Gold warned of the perils of the Iran nuclear agreement. Gold called Iran a major force of instability in the Middle East, and Yadlin said that while the deal gets a B+/A- on its short-term accomplishments of rolling back and freezing Iran’s nuclear program, it’s a “disaster” when it comes to the long-term implications of where it leaves Iran in 15 years.

“My parameters for a good deal were crossed – everywhere,” Yadlin said.

The two also discussed what Israel should do if the deal passes, despite objections in Congress. Yadlin said Israel and the United States should come up with a parallel “parlor agreement” to deepen intelligence collection on Iran, figure out what would constitute a serious enough Iranian violation to prompt a U.S. response, improve Israel’s missile defense capabilities action and strengthen the credibility of a military option against Iran.

Gold said it was Israel’s duty to warn of the perils of the deal now, but if it passed, the Israeli and U.S. governments would find ways together to address the practical challenges the agreement presents.

“We will find a practical way to come up with solutions to a very dangerous situation,” Gold said. “But in the meantime we have to tell what we think about this agreement. We have to say the truth even though it’s unpleasant.”