Iran deal or no deal, a look at Israel’s options 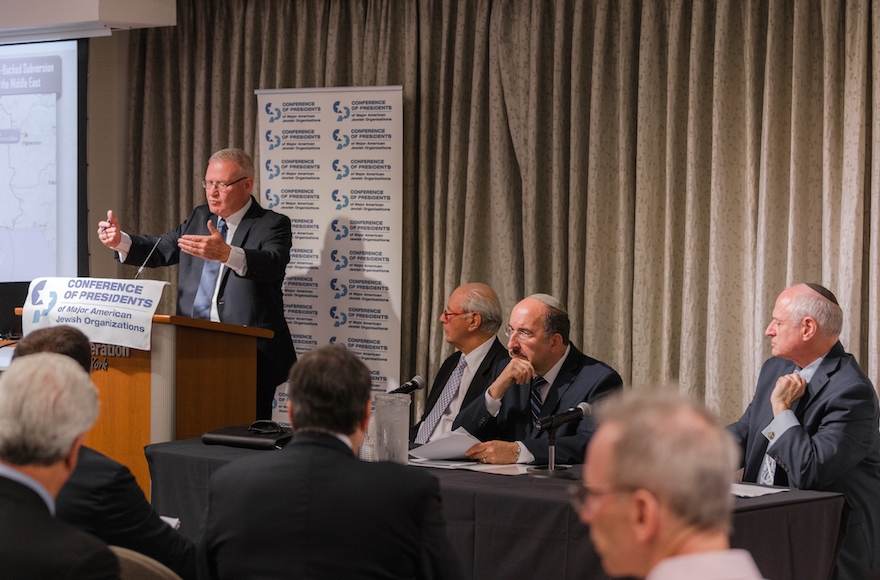 In the not-so-warm afterglow of the announcement of the Iran nuclear deal, two high-ranking Israeli figures — Dore Gold, director-general of Israel’s Foreign Ministry, and Amos Yadlin, former chief of Israeli military intelligence — are making the rounds in the United States talking about how problematic the deal is.

On Wednesday, they spoke to a receptive crowd in New York City organized by the Conference of Presidents of Major American Jewish Organizations. Yadlin focused on the “disastrous” long-term consequences of the deal, while Gold recited the litany of Iranian sins in the Middle East.

Both men seem to hope Congress kills the agreement by voting to nix it in September (hence their U.S. speaking tour).

If that’s what happens, everyone from Iran to Israel to the U.S. and the rest of the P5+1 negotiating partners — Russia, China, Britain, France and Germany — will have to figure out their next moves. But if, as expected, Congress fails to muster enough votes to override a presidential veto, Israel will have to figure out how to live with the agreement.

That’s where things started to get interesting. With so much talk about the deal itself, here finally was some serious consideration about alternatives.

If the deal goes through

Israel and the U.S. should have a parallel agreement to compensate for the deal’s shortcomings, said Yadlin, who now heads Tel Aviv University’s Institute for National Security Studies and in Israeli elections in March narrowly failed to qualify for a Knesset seat with the center-left Zionist Union.

Such a parallel agreement, Yadlin said, should address the following issues:

Gold did not address any particulars of how Israel should prepare to live with the agreement, but he said he was confident the Israeli and U.S. governments would be able to sit down together and figure it out.

“The U.S. and Israel are allies, and when this passes we have to come back to the table as allies and seek how we deal with many of the practical issues that Gen. Yadlin has mentioned,” Gold said.

“We will find a practical way to come up with solutions to a very dangerous situation,” he said. “But in the meantime, we have to tell what we think about this agreement. We have to say the truth even though it’s unpleasant.”

If the U.S. walks away from the deal

Gold, a pessimist in insisting Iran is doing all it can to pursue nuclear weapons, sounded optimistic when talking about how Iran might react if Congress were to nix the deal.

“I believe the Iranians will seek a way to come back to a negotiation,” he said. “It will not be easy, it will be difficult, but I don’t think their interest is in overturning the table, walking away and going for broke.”

Despite all his exhortations against a deal, Yadlin said, “The ‘no deal’ now is much more dangerous than the ‘no deal’ of a year ago, because a deal already has been reached.”

Yadlin outlined three possible scenarios if Congress were to nix the deal:

Option 1: Most likely, he said, Iran will resume its behavior from before the November 2013 interim nuclear agreement: building and spinning more centrifuges, renewing its 20 percent uranium enrichment and cutting the time it would take to reach the nuclear threshold from two months to one. Iran likely would not abandon the Nuclear Non-Proliferation Treaty so as not to lose international credibility, and would hope for the collapse of sanctions. Sanctions probably would mostly stay intact, but Iran also would not face a military attack by Israel or the U.S. It likely would be another year or two before negotiations resumed.

“It is very difficult to predict whether we are going to conflict or to another round of negotiations,” Yadlin said. “They will hope that they will come to the negotiating table with stronger cards because they have more nuclear capabilities. The other side, of course, will need to build his own card for a new round of negotiations.”

Option 2: Iran continues to abide by current nuclear limitations – agreed to in the 2013 interim agreement – and waits for sanctions to collapse.

Option 3: Iran races toward a bomb, betting that America doesn’t have the will to exercise the military option and that Israel, if it has the will to attack, lacks the capabilities to destroy Iran’s nuclear program.

How bad is this deal?

The good news: In the short run, it will shrink the Iranian nuclear program, roll it back by about a year, significantly reduce Iran’s centrifuge capacity, reduce its stockpile of enriched uranium from 12 tons to 300 kilograms, and impose better inspections in declared nuclear areas, Yadlin said, giving the deal’s short-range elements a B+/A- overall.

The bad news: In the long term it’s a “disaster” that will grant Iran as much nuclear infrastructure as it wants once the agreement expires, leaving Tehran “zero distance” from a bomb, Yadlin said. Meanwhile, Iran will use the infusion of cash it will get from sanctions relief to ship weapons to terrorist organizations. To keep pace with Iran, Sunni Arab nations like Saudi Arabia and Egypt will mount their own nuclear weapons programs and bolster their conventional weapons arsenals, eroding Israel’s qualitative military edge in the region.

“Iran is a challenge,” Yadlin said, “but we are strong and we will be able to cope with it if we do the right thing.”