Israel said to have turned off blacks in Congress, and other Iran deal news 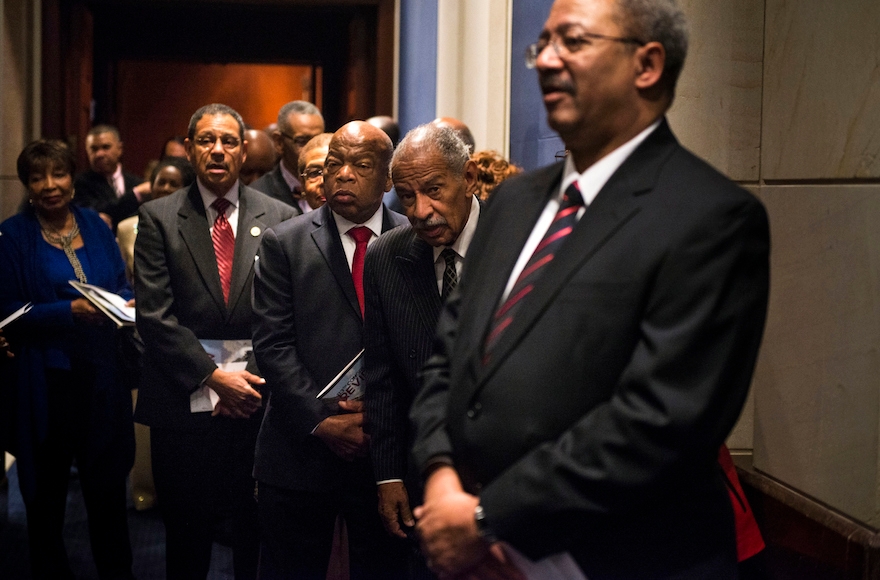 Rep. John Lewis, D-Ga., second from right, with other members of the Congressional Black Caucus before a ceremony at the U.S. Capitol, Jan. 6, 2015. (Gabriella Demczuk/Getty Images)
Advertisement

Don’t count on the Black Caucus

Washington Post columnist Colbert King recently rounded up a litany of horrors to explain why the Congressional Black Caucus isn’t going to give Israel the support it needs to kill the international nuclear agreement.

“Should it come to a search for 40 Democratic votes to join the House’s 247 Republicans in voting to override a possible Obama veto of legislation blocking an Iranian deal, don’t look for help from the Congressional Black Caucus. Hostility to the current Israeli leadership is real, and not just among caucus members. Many of their African American constituents are quietly seething, too,” he said.

Among the turn-offs listed by King: Judy Nir-Mozes’ racist tweet about President Barack Obama and Rabbi Shlomo Riskin’s likening of Obama to Haman.

Sen. Ted Cruz, R-Texas, one of a welter of candidates for the GOP presidential nod, tried protests, tried legislation, but he hasn’t killed the Iran deal, the Dallas Morning News reported. Now he’s relying on the grass roots.

“He’ll do everything he can to rally millions of Americans to call on their congressmen to oppose the deal when the vote comes. He hosted a strategy meeting [Tuesday] with conservative allies and activists, about 15 of which joined him afterward for a press conference in his Capitol Hill office,” wrote Sylvan Lane.

“’The only hope that a sufficient number of Democrats are willing to stand up to the Obama White House … is if millions of Americans across this country light up the phones,” she quotes Cruz as saying. “Every Democratic member can choose whether he or she will value the safety and security of the United States … or whether he or she will value partisan loyalty to the Obama White House.”

Liberal Israel advocacy group J Street has taken on David Wade, a former State Department chief of staff, as a consultant to make the case that backing the deal is the pro-Israel thing to do, the Washington Post’s Greg Sargent reported.

“This is a pro-Israel, pro-America deal, end of story, and winning this argument is exactly what J Street is here to do,” Wade told me. “The stakes are enormous. This really is the single most consequential foreign policy fight I’ve seen in 20 years in Washington. It’s a moment that really defines what it means to support Israel and to do what is in the security interests of the United States and Israel together.”

J Street doesn’t have the $30 million and counting that the AIPAC-affiliated Citizens for a Nuclear Free Iran has at its disposal, but it’s doubled the $2 million it had to make its case at the outset of campaigning after the deal was reached July 14, thanks to Jewish funders like Alan Solomont and Louis Susman.

How worried is Obama about the Jews?

At the White House reporters briefing on Wednesday, a Daily Mail reporter asked Spokesman Eric Schultz the question we at JTA need to know: How worried is President Obama about the Jews? At least the ones in Congress who have yet to declare. Schultz’s answer: We’re patient. Here’s the transcript:

Q: I wanted to go back to Iran. You describe the talks that the President has had or the White House has had with Democrats and members of Congress as extensive about the Iran deal. Do you know if the president has talked to Senator [Charles] Schumer personally about the deal?

A: I don’t have specific conversations to read out. I know that the president has spoken with specific members of Congress — both in the House and the Senate, both Democrats and Republicans, and both skeptics and supporters. The President believes that, on the merits, that this is an argument — that our case is one that is worth making. And so I don’t have specific conversations to read out to you. But I do know that Senator Schumer, as a member of the leadership in the Senate, is someone whose support we’d like.

Q: Well, on a related note, will Congresswoman Debbie Wasserman Schultz be at the event tonight? (Obama was due to meet Wednesday evening with congressional Democrats.)

A: I think we had a resounding RSVP list. But I don’t have the exact tally in front of me, so you might want to check with her office.

Q: And a final thing on that topic then, isn’t it troubling, though, to the White House that both of those very high-profile Democratic members who also happen to be Jewish Americans, as well, have not come out in support of the deal? I know it’s only been two weeks. But the deal, as the White House has said, is very close to what the political framework was. So they’ve known what was going to be in it for quite some time now.