At Berlin’s European Maccabi Games, the past is ever-present 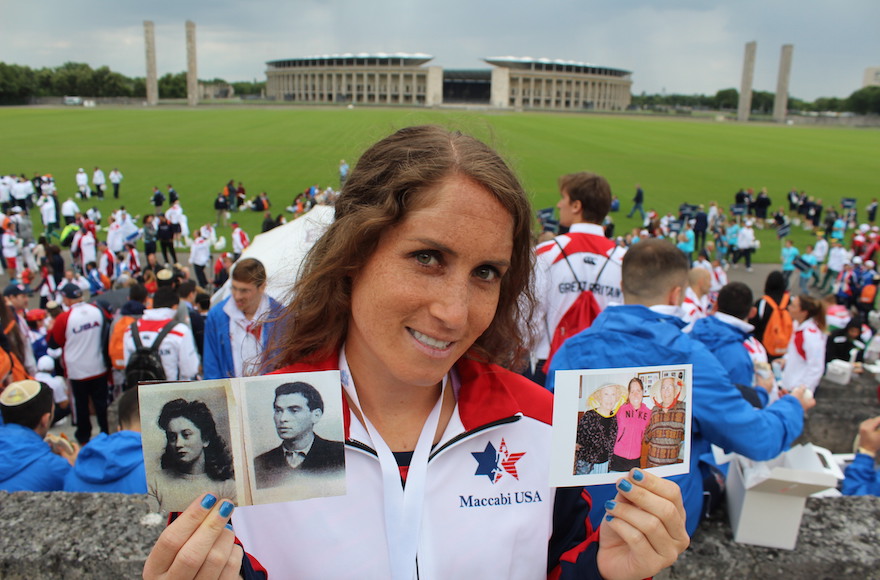 Catie Chase, at this year's Maccabi Games in Berlin, showing photos of her late grandparents, who survived the Holocaust. (Hillel Kutler)
Advertisement

Her late father’s removal from the U.S. track team hours before the 4×100 meter relay in the still-standing stadium across from where the opening ceremony took place Tuesday made Nancy Glickman’s act the dramatic climax of a night replete with symbolism as the games graced German turf for the first time.

The parade of some 2,300 Jewish athletes from 36 nations was a demonstration of the Jewish people’s triumph over attempted annihilation, speaker after speaker intoned during the ceremony.

The survival theme held even during the appearance of American Jewish reggae-rap singer Matisyahu, whose “One Day” —“Sometimes in my tears I drown/But I never let it get me down” — was interspersed with an ominously toned recording of the Passover melody “V’hi She’amda,” which proclaims that “in every generation, they rise against us to destroy us; and the Holy One, blessed be He, saves us from their hand.”

The gathering marked the 14th time the European Maccabi Games have been held. They started in Prague in 1929 and in recent decades have occurred every four years. The European games, and the quadrennial Maccabiah held in Israel (and in the British Mandate for Palestine, before the Jewish state was founded), were canceled during World War II. So, too, were the Olympics, with the last prewar games, dubbed the “Nazi Olympics,” held in Berlin in 1936.

“When I think of the Jews killed,” German Justice Minister Heiko Maas said Tuesday during a service held prior to the opening ceremony, in which he named several athletes murdered in the Holocaust, including the German soccer player Julius Hirsch, “I am filled with a deep sense of shame.”

He went on: “Considering our history, the fact that Jewish men and women once again want to live in this country and this city is a stroke of an undeserved present. In fact, it is a minor miracle.”

Some 137,000 Jews live in Germany today, many of them immigrants from the former Soviet Union. There were about 565,000 Jews in Germany prior to the Holocaust, and just 37,000 in 1950, according to the United States Holocaust Memorial Museum.

Competition in many of the 18 sports of the European Maccabi Games began earlier in the day, including in basketball, with the American men’s team cruising past Israel, 89-45. The games run through Aug. 5.

Hours before the American basketball players took the court, they participated in a U.S. delegation-wide visit to the former Sachsenhausen concentration camp 25 miles north of here, an experience that embedded in assistant coach Zachary Elfenbein a “coldness that swept through [my] body,” he said. 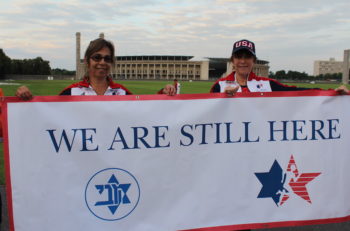 Nancy Glickman, left, and Ann Stoller, descendants of athletes who were not allowed to participate in the 1936 Olympic Games in Berlin because they were Jewish, at the European Maccabi Games, July 28, 2015. (Hillel Kuttler)

Greeted by thunderous applause, Germany was the final, and largest, contingent entering the amphitheater. Men’s futsol (indoor soccer) coach Joerg Osowski, of Hamburg, told JTA that as a non-Jew, it’s “very important to show that the new generation is more open-minded and tolerant” than those preceding it.

At Tuesday’s ceremony were eight German Jews who had competed in Copenhagen at the 1959 European Maccabi Games, the first held after World War II.

Russia’s flag bearer and basketball team manager Josef Roytman, 80, survived the Holocaust with his mother and two sisters by escaping east from Romania in 1941 and settling in Karshi, Uzbekistan.

“This is the Jewish Olympics, showing that the Jews continue to live and that there’s an Israel to defend us,” Roytman, who settled in the Jewish state in 1974, said in an interview. “It’s not how it once was. There’s a future.”

“I feel like I’m representing them” in these games, said Chase, who lives near Los Angeles. “Here in Berlin, which was the Nazi epicenter – that’s special.”

Chase was one of four women leading the 210-member American contingent into the ceremony. Another was Ann Stoller, whose husband, Steven, is a cousin of the late Sam Stoller, the sprinter who with Marty Glickman was prevented by U.S. track officials from competing at the 1936 Olympics because they were Jewish.

Inside the amphitheater as the ceremony concluded, Stoller grasped the Maccabi torch as she rode upon the last motorcycle of a procession that had departed from Israel 18 days earlier. When the motorcycle came to a stop, she handed the torch to a waiting Glickman, who turned and displayed it with an outstretched left arm.

Moments earlier, loud applause greeted a photograph screened of Jesse Owens, the African-American sprinter who won four gold medals at the ’36 Olympics. Owens was a teammate of the two Jewish men.

Glickman, a Washington, D.C., resident, completed the relay denied her father, proceeding several paces up a platform and kindling the cauldron to illuminate the dark night.

The government of Germany funded the reporting trip of Hillel Kuttler. It had no involvement in the writing or editing of this article.