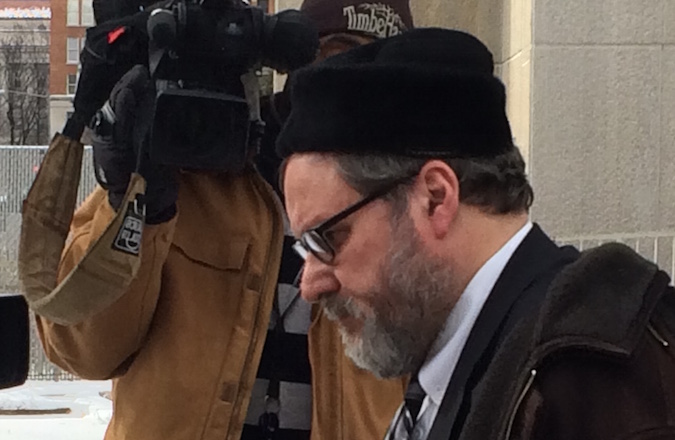 (JTA) — A judge upheld the 6 1/2-year prison term of Rabbi Barry Freundel, the Washington, D.C., rabbi who secretly videotaped dozens of women undressing in the mikvah.

The ruling Friday in D.C. Superior Court came in response to Freundel’s appeal of the sentence levied in May after he pleaded guilty to 52 counts of voyeurism. His appeal argued that he should be sentenced for one offense rather than 52 offenses.

During the trial, Freundel admitted to installing video cameras in the changing rooms at the National Capital Mikvah, next to Kesher Israel, the prominent Orthodox synagogue he headed. He recorded at least 52 women between March 2012 and September 2014.

Freundel entered the courtroom in an orange jumpsuit and black kippah, looking noticeably slimmer than during the trial. His beard was closely shaven. He did not speak, but briefly surveyed the gallery, where the audience consisted mostly of lawyers and journalists.

During the trial, the judge sided with the government, which argued that Freundel’s meticulous labeling of his videos of congregants preparing to enter the Jewish ritual bath at the National Capital Mikvah makes clear that he had criminal intent with regard to 52 individual women.

“Each one of these women suffered a gross violation of their privacy,” said the judge. “In my sentence I took into account that each individual was an individual and deserved to be recognized as such.”

Alprin further noted that Freundel didn’t receive “anything close to the maximum sentence of 52 years,” but added that “the facts of this case do not engender in me a desire to be overly lenient.”

Neither side spoke to the media as Freundel was led back to federal prison.

According to the Towson Patch, Freundel, 63, was earlier transferred from a Washington, D.C.,  jail to a federal prison with religious rehabilitative programs.

Freundel was arrested last October on charges of voyeurism. Before his arrest, he was active in the Rabbinical Council of America and was known for his expertise on conversion to Judaism.