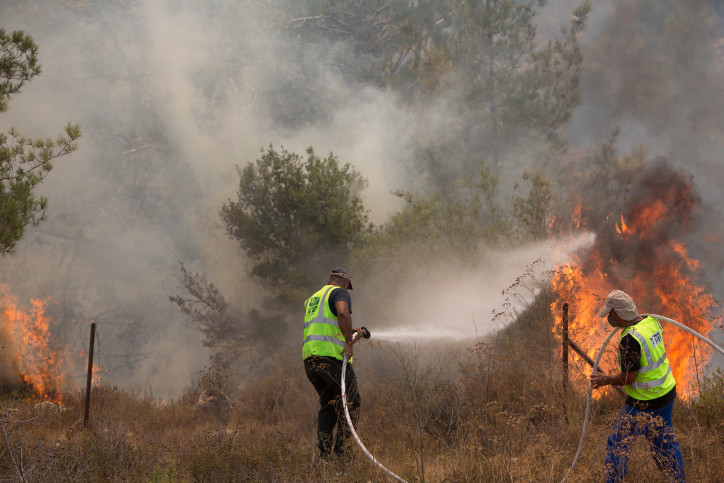 Israeli workers trying to extinguish a major fire that burned homes and warehouses at a moshav near Jerusalem, Aug. 2, 2015. (Yonatan Sindel/Flash90)
Advertisement

JERUSALEM (JTA) — A fire that caused the evacuation of hundreds of residents of a Jerusalem neighborhood and nearby moshav was brought under control after burning for several hours.

Sunday’s fire burned homes and warehouses in Moshav Even Sapir and caused the temporary closing of Route 1, the main highway into Jerusalem, which was reopened by evening. It also moved close to Hadassah Medical Center in Ein Kerem, but the hospital was never threatened, according to reports.

Some 30 firefighting teams and at least four airplanes battled the blaze, which is believed to have been started by a negligent farmer, Haaretz reported.

The country has been hit by a days-long heatwave, with temperatures reaching over 100 degrees in the Jerusalem area on Sunday.

Other fires that have burned in recent weeks near Jerusalem are believed to have been started by arsonists. Nearly 400 acres of forest in the Jerusalem area have been burned.

Meanwhile,  more than 150 Israelis were treated Sunday for conditions related to the extreme heat.