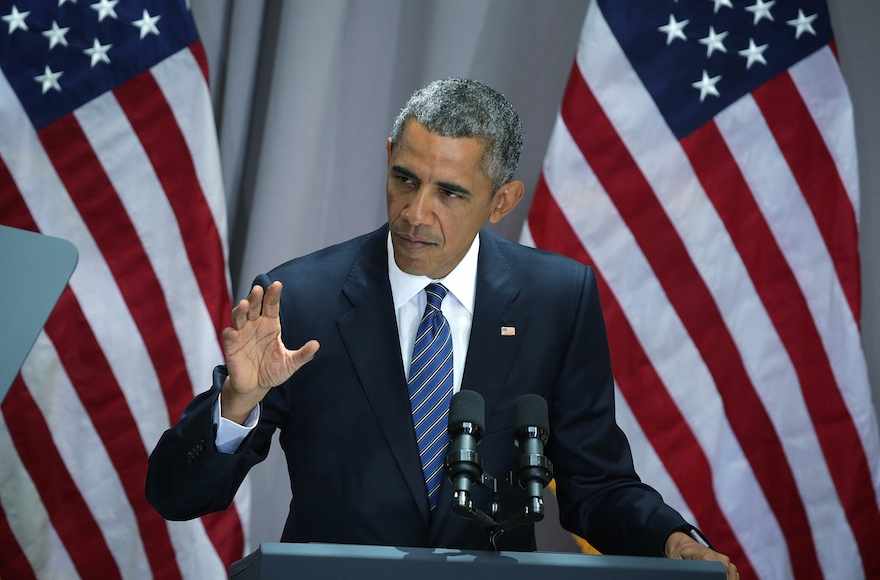 WASHINGTON (JTA) — President Barack Obama said Israel’s government was the only one openly against the Iran deal, but added that he understood its concerns.

“This is the strongest nonproliferation agreement ever negotiated, and because this is such a strong deal, every nation in the world that has commented publicly, with the exception of the Israeli government, has expressed support,” he said Wednesday in a major policy speech at American University in Washington, D.C., on the deal reached July 14 between Iran and six major powers.

While Obama suggested throughout the speech that opponents understood that the only alternative to the deal was war, he said toward the end that he understood that Israeli Prime Minister Benjamin Netanyahu and Israel supporters had valid reasons to oppose the agreement, which trades sanctions relief for nuclear restrictions.

“I do think it is important to acknowledge another more understandable motivation behind the opposition to the deal, or at least skepticism to this deal,” he said. “And that is a sincere affinity for our friend and ally Israel.”

Obama said Americans should “take seriously concerns in Israel” given Iran’s threats against Israel, its Holocaust denial and its anti-Semitism. The president said that to address Israeli concerns, he was ready to enhance support for missile defense, information sharing and interdicting Iranian disruptive activities in the region.

The day before the speech, Obama had met with Jewish leaders at the White House and acknowledged their concerns that pro-Israel opponents of the deal were unfairly cast as warmongers by deal proponents. Otherwise, the hourlong speech was lacerating toward opponents of the deal.

Obama excoriated opponents as “ignorant” or “just not being straight with the American people,” at one point likening Republicans in Congress to Iranian hard-liners.

The speech at American University, where President John Kennedy in a 1963 address called for a rollback in the nuclear weapons buildup between the United States and Soviet Union, launched a major campaign by Obama to keep Congress from killing the deal.

Congress has until mid- to late September to reject the deal. Most Republicans oppose the deal, but to override Obama’s promised veto, opponents need two-thirds of both congressional chambers, making Democrats the political battlefield.

“My fellow Americans,” Obama said, “contact your representatives in Congress, remind them of who we are, remind them of what is best in us and what we stand for so that we can leave behind a world that is more secure and more peaceful for our children.”