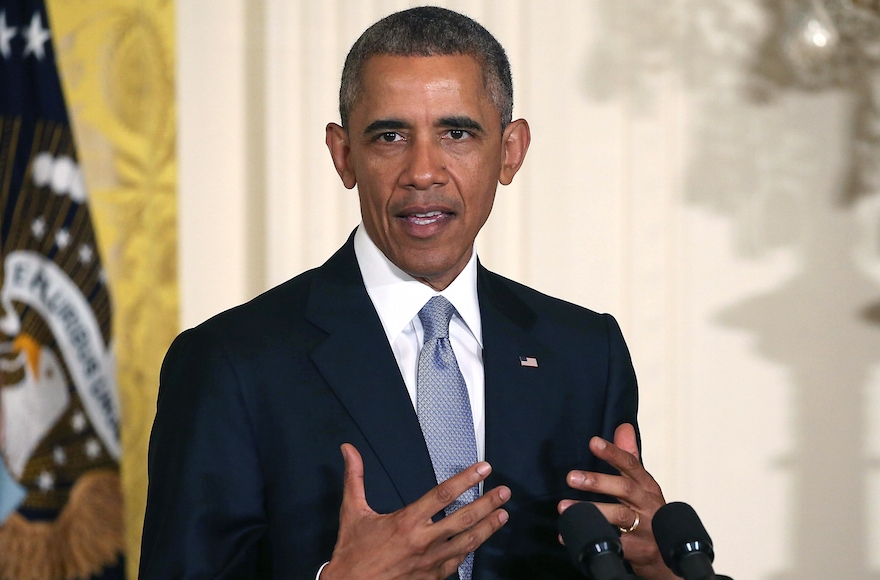 WASHINGTON (JTA) — President Barack Obama and pro-Israel leaders exchanged concerns about how each side distorts the other’s arguments in the debate over the Iran nuclear deal, and how the distortions are creating divisions in the Jewish community.

The meeting Tuesday evening at the White House between Obama and an array of Jewish leaders lasted more than two hours.

Participants said it was civil and friendly — Obama got a round of “happy birthdays” when he walked in the room — but that the president forcefully expressed his frustrations with how the deal has been presented in the Jewish community. In contrast with previous meetings, they said, much of the discussion focused on the effect the debate was having on American Jews, as opposed to the details of the agreement.

Pro-Israel officials confronted Obama about the impression they said he leaves that his opponents are “warmongers” and his suggestions that there is something untoward about their lobbying.

According to participants, Obama was especially frustrated with the American Israel Public Affairs Committee for not allowing activists who flew in last week to lobby the extended encounter he offered with his top officials (their presentation was limited by AIPAC to 30 minutes).

Obama met the Jewish leaders as deal opponents and supporters are waging a battle for the hearts and minds of Democrats in Congress, who are the key to success or failure of a resolution of disapproval in a legislative window that closes toward the end of September. Democratic lawmakers are facing intensive lobbying and a barrage of ads from both sides. AIPAC is leading the effort to kill the deal.

“He asked people in the room, state your positions, argue them as you wish, but at least represent the facts objectively,” said Robert Wexler, a former congressman from Florida who now directs the Center for Middle East Progress. “Don’t misrepresent what the agreement provides.”

Six other people in the room, among them officials who favored and opposed the deal and had yet to come to a decision, related accounts similar to Wexler, the first Jewish lawmaker in Congress to endorse Obama’s presidential run in 2007 and a backer of the backer. Five asked not to be identified. Also in the room were Vice President Joe Biden, National Security Adviser Susan Rice and Ben Rhodes, a deputy national security adviser.

In the first 30 minutes of the meeting, Obama picked through the sanctions relief for nuclear restriction deal reached last month between Iran and six major powers and argued that it cut off Iran’s pathways to a nuclear weapon.

Obama displayed a familiarity with the arguments among opponents of the deal, even having read the talking points memo that AIPAC distributed to more than 600 activists who flew in last week, according to Greg Rosenbaum, the chairman of the National Jewish Democratic Council and the only other participant besides Wexler to speak on the record.

Among the frustrations Obama expressed, Wexler said, was that some materials distributed by pro-Israel groups suggest sanctions relief will kick in straight away, and not after Iran has met the deal’s requirements to roll back uranium and plutonium enrichment. (It’s not clear if that was one of the AIPAC talking points.)

Wexler summed up Obama’s message: “The debate is too important for the promotion of inaccuracies and misleading misrepresentations.”

Obama was especially frustrated that AIPAC allowed his top officials just 30 minutes to explain their side of the deal last week in an encounter that included no questions from the audience.

AIPAC officials have said that the White House requested the meeting at the last minute with Denis McDonough, his chief of staff; Wendy Sherman, the top U.S. negotiator at the Iran talks; and Adam Szubin, Obama’s top sanctions enforcement official. More than 30 minutes would have impinged on lobbying appointments, the officials said.

Obama, who had directed his staff to ask AIPAC for the meeting, said he was ready to give AIPAC four hours after the activists finished their meetings.

The two AIPAC lay leaders at the White House meeting were Michael Kassen and Lee Rosenberg, both past presidents. Obama expressed disappointment that some of the organizations attacking the plan were led by friends, an apparent reference to Rosenberg, who was a fundraiser for Obama.

An AIPAC spokesman did not immediately return a request for comment.

Deal opponents at the meeting complained that they had been depicted as warmongers because Obama insists that the only alternative to his plan is war. Obama said that there were among the plan’s critics those who favored war, but acknowledged that was not true of all of the opponents. Nonetheless, he said, he would continue to point out that the likely outcome of the plan’s failure was war.

The deal critics also criticized Obama for saying in a conference call with liberal groups last week that his opponents were funded by billionaires. Obama noted that an AIPAC affiliate was ready to spend between $20 million and $40 million to kill the deal, and he saw nothing wrong with pointing that out to his followers.

Much of the conversation focused on the split the deal is generating in the Jewish community, which Obama said concerned him, said Rosenbaum, whose Jewish Democratic group backs the Iran deal.

According to Rosenbaum, the president said that “he felt that if we continue to make this personal and substitute attacks for the deal pro or con, we weaken the Jewish community and the long-term U.S.-Israel relationship.”

Among the other groups represented were J Street and Ameinu, liberal Middle East policy groups that back the deal, and representatives of an array of groups that have yet to pronounce, including the Conference of Presidents of Major American Jewish Organizations, the Jewish Federations of North America, the American Jewish Committee, the Jewish Council for Public Affairs, the American Jewish Committee and the Anti-Defamation League and representatives of the Reform and Conservative movements. The Orthodox Union, which opposes the deal, was also present, as was the World Jewish Congress, which has been strongly skeptical of the deal. There were regional leaders present as well.