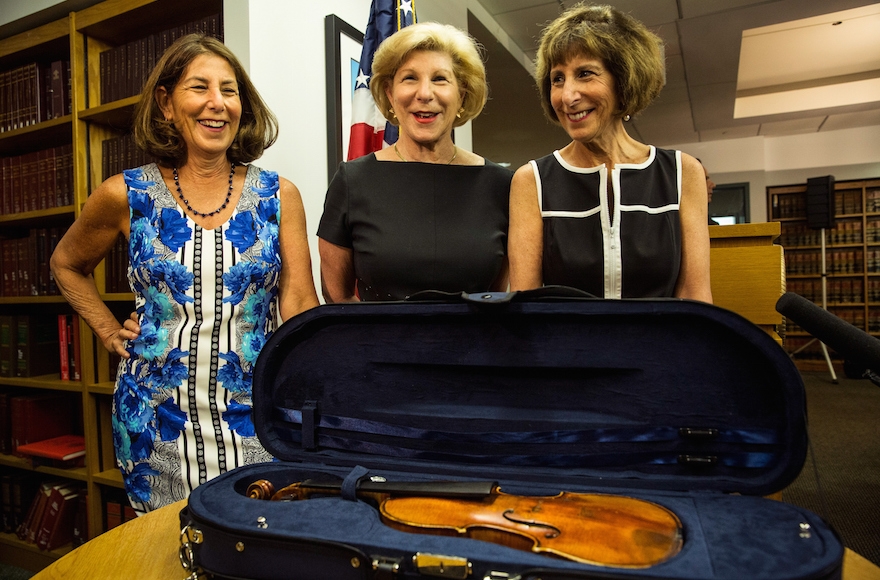 Jill Totenberg, Nina Totenberg and Amy Totenberg viewing their father's Stadivarius violin, which was stolen after a concert 35 years ago, at an FBI press conference announcing the recovery of the violin on Aug. 6, 2015, in New York. (Andrew Burton/Getty Images)
Advertisement

Jewish violin virtuoso Roman Totenberg enjoyed a long life, making it to the ripe old age of 101. But that wasn’t quite long enough to be reunited with the prized instrument that was stolen from him in 1980.

The FBI officially announced Thursday that it had recovered Totenberg’s almost 300-year-old Stradivarius, which he purchased in 1943. With just a few hundred of its type in the world, it’s now worth millions of dollars, according to The Associated Press.

The Polish-born Totenberg, who died three years ago, was the father of NPR’s legal correspondent Nina Totenberg. He was a musical prodigy, making his debut at age 11 as a soloist with the Warsaw Philharmonic Orchestra, according to his New York Times obituary.

After purchasing the Stradivarius, Totenberg, who had immigrated to the United States in 1938, played exclusively on the prized instrument for decades, soloing with major orchestras in the U.S. and Europe. He appeared on “dozens if not hundreds of recordings,” according to the Times obituary, and taught at Boston University and elsewhere.

Then, in 1980, the violin was stolen from his office. Although an aspiring violinist, Philip S. Johnson, had been spotted nearby at the time of the theft, the police did not have enough evidence for a search warrant or arrest. The case remained unsolved for years.

In June, the FBI called Nina Totenberg and said it had the violin; an appraiser to whom the instrument had been presented alerted authorities.

“I really could hardly believe it at the time,” Nina Totenberg told the AP in an exclusive interview on Wednesday. “I said, ‘I have to call my sisters. I’ll tell them not to get their hopes up,’ but he said, ‘You don’t have to do that. This is the violin.'” (Totenberg described the whole affair in greater detail on NPR Thursday.)

“This loss for my father was, as he said when it happened, it was like losing an arm,” Nina’s sister Jill Totenberg told the AP. “To have it come back, three years after he died, to us, it’s like having him come alive again.”

The AP did not identify the woman who brought the violin for appraisal, but said she is the former wife of Johnson, the violinist who had long been a suspect. He died in 2011.

On Thursday, the violin was returned to the Totenbergs, who plan to sell it — to a musician, not a collector.

With potentially millions of dollars coming from the sale, will Nina Totenberg, who is 71, be tempted to retire in style from her job at NPR?