WATCH: Hand-holding gay couple is cursed at in Jerusalem 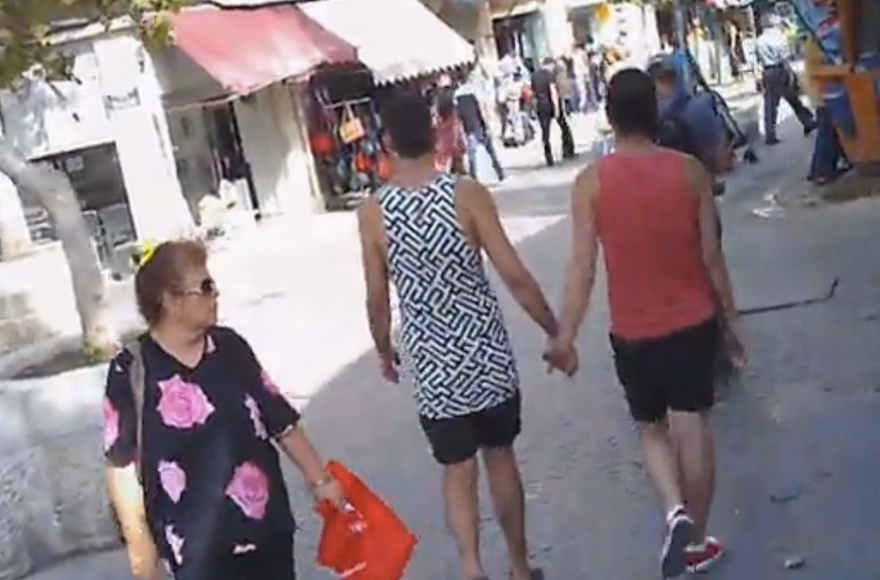 Tel Aviv may be one of the most welcoming cities in the world for LGBTQ people, but Jerusalem presents a different story.

Israeli news website Ynet has published a video of a gay male couple being greeted with curse words and stares while walking the streets of Israel’s capital city holding hands.

The men, identified by their first names, Shai and Ophir, were called “gay sons of bitches,” “dirty gays” and other crude slurs. Many people turned and stared at the couple in disbelief.

Jerusalem was of course the site of a bloody Pride Parade stabbing perpetrated by a Haredi man on July 30, which left one dead and five wounded. Ynet planned the video to capture the reactions of everyday passersby in the wake of the stabbing, Haaretz reported.

Israeli Prime Minister Benjamin Netanyahu regularly touts Israel as the safest place for LGBTQ people in the Middle East. In 2010, for example, in the wake of an incident that left several Gaza-bound protestors dead, he told pro-Palestinian activists to “Go to the places where they hang homosexuals,” such as “Tehran” or “Gaza.”

The video is reminiscent of several others published earlier this year of journalists walking through various European cities while wearing yarmulkes. Unfortunately, most of the videos – especially one featuring an Orthodox reporter walking through Muslim neighborhoods in Paris – had similar results.

(Those videos were also likely inspired by “10 Hours of Walking in NYC as a Woman,” which went viral last October for its portrayal of the everyday harassment women deal with on the streets of New York.)

All the videos were shot with hidden cameras to avoid drawing attention to the scene, usually by cameras on a backpack. Ynet did not disclose how its video was shot.