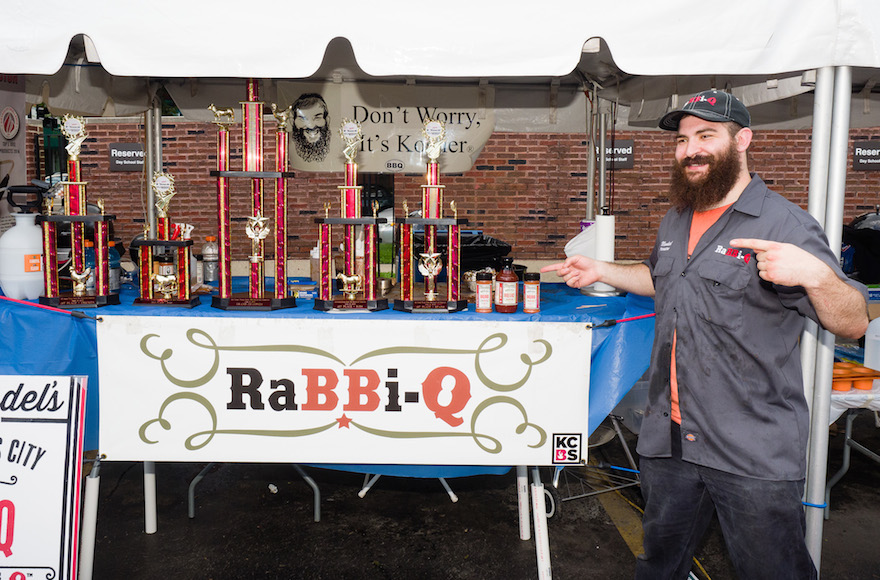 One is rabbi. The other is pitmaster.

The 33-year-old Orthodox rabbi (and follower of the late Lubavitcher rebbe) is readying to oversee the fourth annual Kansas City Kosher BBQ Festival on Sunday, an event that is expected to attract as many as 4,000 attendees.

Segal — known as “RaBBi-Q” to his fans and fellow competitors on the circuit — is a kosher barbecue champion in more ways than one, standing (and cooking) at the forefront of a rising movement within a distinctly American subculture.

“I just want to energize people,” Segal said from his home in the Kansas City suburb of Overland Park, Kansas. “Kosher can be fun.”

After a long, slow burn, kosher barbecue is catching fire: New restaurants and food trucks are popping up from Brooklyn to Los Angeles. Meanwhile, the number of kosher barbecue events across the country has tripled, from a handful to more than a dozen. Many credit Segal’s passion and leadership as a major spark.

READ: Converting a happy pig into a kosher cow: A Memphis fundraising story

“Mendel’s been instrumental in changing kosher barbecue everywhere you can see,” said Mordechai Striks, a New York City psychologist and paramedic who took home the all-around title at last year’s Southern New England Kosher BBQ Championship. “He’s involved in every competition. People look to him because he runs a damn tight ship and he does it right.”

In the few years since he dived whole hog — well, minus the hog — into the national scene, Segal has racked up wins in kosher contests as well as on the mainstream barbecue circuit. In the latter he is seen as a worthy competitor and not just a curiosity — long, bristly beards aren’t so uncommon among barbecue buffs, though the tzitzit, or ritual fringes, worn by observant Jewish men under their clothes sometimes raise eyebrows. This summer he launched his own line of Mendel’s Kansas City BBQ Sauce and BBQ Rub (“Don’t worry, it’s kosher,” the packaging reassures), available in seven states.

“It happens that I’m obsessed with barbecue,” said Simon Majumdar, a Food Network regular who met Segal in 2012 while in Kansas City researching his book “Fed, White, and Blue: Finding America With My Fork.” “And what I say is that Mendel’s not making kosher barbecue — he’s making really, really terrific barbecue that happens to be kosher.”

Segal is as surprised as anyone to find an apron and tongs are now the tools of his trade. While he saw rabbinic ordination as a way of capping off his yeshiva training, professional ambitions led him to the wholesale diamond business and commercial real estate. Family — specifically, his wife’s — brought him to Kansas from his native Chicago just in time for the 2008 recession. Though he had no experience in food, “other than as an avid eater,” he applied for an opening in the kosher deli department of a local grocery store. 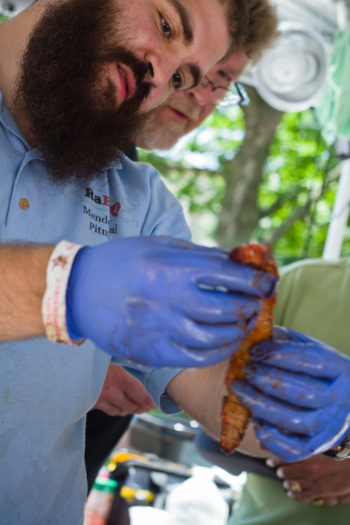 “I’m living in my in-laws’ basement with my wife and one kid, and a job’s a job, so you do what you gotta do, right?” he said.

Regular customers started referring to the department as “Mendel’s,” and contacts led to his current job as executive director of the community’s kosher supervisory Vaad HaKashruth in 2012. His first order of business was to plan a fundraiser.

READ: Kosher BBQ competition is a hit among Jews — and some Muslims, too

Around this time he’d gotten his first taste of authentic Kansas City smoked brisket at a kosher event specially catered by Jack Stack, one of the most respected barbecue joints in town.

Inspired by a longstanding kosher contest in Memphis, one of Kansas City’s rival barbecue cities, Segal enlisted a couple of local Jewish enthusiasts and a professional adviser: Andy Groneman, a cooking instructor and 20-year vet of the competitive barbecue circuit. Segal’s committee recruited a dozen barbecue teams, mostly first-timers, and was hopeful the August 2012 event could draw as many as a thousand people. More than twice that showed up.

For the first festival, Segal had hired a kosher caterer to sell barbecue concessions. The second year he took on the task of slow cooking more than a ton of meat himself.

“It was just crazy,” he said. “But it went well. And the next year I got better at it.”

Segal is proudest of his burnt ends, which in Kansas City’s melting pot of barbecue styles is considered the local delicacy. (When a brisket is done cooking, the point end is returned to the smoker until it develops charred “bark” and is then served cubed or chopped.) The most satisfying moment of his young cooking career came when he overheard two cops working the event: “One said to the other, ‘I wonder where they got these burnt ends from — these are the best burnt ends I’ve ever had.’”

Soon, Segal was hitting the road, competing in barbecue fests as often as his schedule would allow.

His mission is twofold: “First, I want people who keep kosher to not have to suffer with subpar food categories,” he said. “If they want barbecue, they should be able to get good barbecue.”

To that end, Segal has facilitated the growth of several new kosher barbecue festivals, from Long Island to Chicago to Dallas. (See below.)

The second goal, however, is broader. Segal brings in professionals to do demos, and many of the competitors are non-Jewish and/or non-kosher-keeping cooks intrigued by the challenge of the constraints of kashrut. (Pork, big in most contests, cannot be used, of course, and sauces and rubs must be strictly kosher.)

From the beginning, Segal sought the blessing of the Kansas City Barbeque Society, the governing body of competitive barbecue that this year will sanction more than 450 contests worldwide. Segal’s became the first-ever kosher event on the list, and this year Dallas and Fairfield, Connecticut, are following suit. 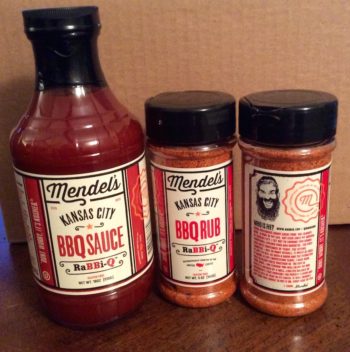 Rabbi Mendel Segal launched his own kosher barbecue sauce and rub this summer. (Courtesy of Segal)

Currently, the kosher contests are part of the K.C. society’s Competitor Series, which doesn’t award standings points or qualify teams for the American Royal World Series of Barbecue in October — the largest such event on earth, with more than 550 teams. A kosher competition could never meet the society’s current championship rules, which require entries in pork ribs and pork butt (Segal enlists “my treif guy” to cook the pork on separate equipment for the society’s events). But the rabbi has been in talks with society officials about creating a kosher subdivision with its own playoff and championship.

Once the whirlwind of the weekend passes, Segal will hit the stretch run of the season and then focus on the next steps for his product line, such as introducing prepared items that can ship to kosher-food deserts. And of course he’ll keep spreading the barbecue faith.

Segal’s short-term goal is to enter the American Royal, where he would make make history in more ways than one: first rabbi to compete, first Orthodox Jew to compete, first Shabbat to be kept at the Royal. And since this year’s event also falls during the intermediate days of Sukkot, “I guess I’d have to build the first-ever sukkah at the Royal, too,” he said, laughing.

In the past few years, kosher-certified competitive barbecue has caught fire, sparking new contests across the country. Here’s a tasty sampling of this year’s coming festivities.