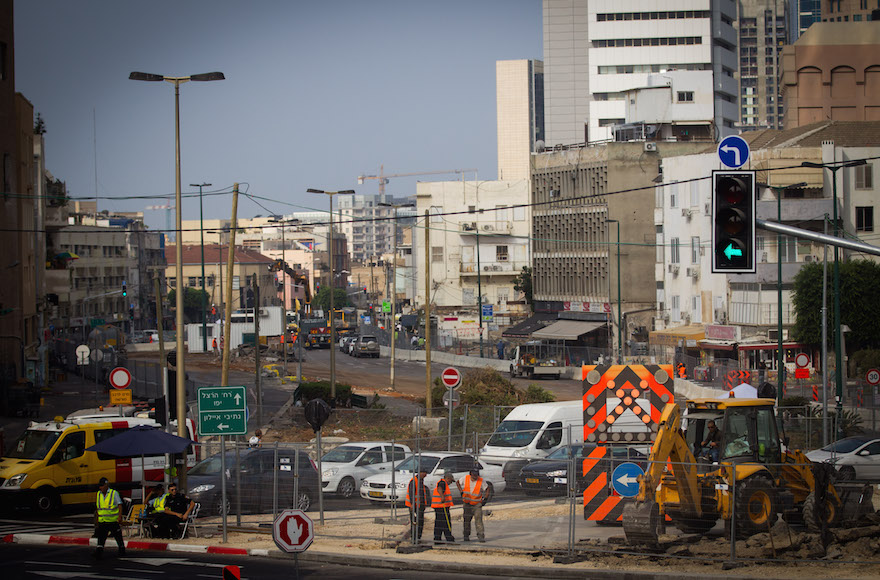 In 2011, when Los Angeles shut down a stretch of one of its busiest highways for a weekend of repairs, residents braced for a traffic jam “of biblical proportions.” Similar sentiments preceded the start of construction of Tel Aviv’s long-awaited light rail system last Sunday.

But rather than a few days of inconvenience, city officials warned that construction will likely cause extensive auto congestion in the center of Israel, already the country’s busiest corridor, for years to come.

“Switch to public transportation,” Brig. Gen. Yoram Ohayon, deputy commander of the Tel Aviv District police advised commuters at a press conference. “It will be easier to get to Tel Aviv and to move about inside it that way.”

The Tel Aviv rail system would be a welcome relief for the approximately half a million cars that flood the city daily from surrounding suburbs, and ultimately mitigate what has become a citywide parking lot of honking cars and buses navigating narrow one-way streets or feeding into a handful of major thoroughfares during rush hour.

But to make shakshuka, you’ve got to break a few eggs. And to give Tel Aviv a light rail system, you have to make a few traffic jams – and blow up a bridge or two.

Traffic in the city during the first week of construction hasn’t been as bad as some feared.

But officials expect that to change when several major junctions are closed in the near future, and in particular later this month when the 39-year-old Maariv Bridge is demolished to make room for the new Carlebach underground light rail station that will rise on its ruins.

However necessary the project may be, don’t expect Israelis to bear it quietly.

Business owners have bemoaned the disruption to parking, as well as the inevitable dust, debris and noise that drive away customers – not to mention a fear of invading rats driven by underground construction.

One proprietor told Haaretz that the hundreds of thousands of shekels he had invested in his restaurant would go down the drain because of the deterrence to prospective diners. A local barber complained that, despite the financial losses he would incur, the city is not granting rebates on taxes or rent.

Another owner in the area took a wider view, placing the country’s expenditures on this project in the context of Israel’s other expensive endeavors: “Let’s deal with this for a few years and in the end we’ll get something,” he said. “Not like the last war in which we invested money and came out with nothing.”

Officials working on the rail system’s initial Red Line, comprising 10 underground stations, said the area affected by increased traffic could span a radius of more than 25 miles — reaching as far north as the city of Netanya, Ashdod to the south and Modi’in to the east — and exacerbate an already overtaxed network of highways and roads. 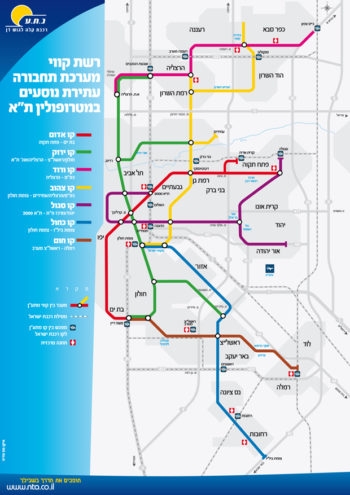 A map of the planned light rail system for central Israel (Courtesy: NTA)

Last week, NTA, the company charged with the execution of the system, also announced plans for the forthcoming Green Line, connecting Tel Aviv to Herzliya in the north and Holon in the south, with stops at Tel Aviv University and municipal business districts. (The plans are subject to pubic comment, and are pending approval.)

The Tel Aviv light rail project has been a pipe dream of residents and politicians in the coastal city for nearly two decades, with signs around town declaring the start of construction now comically out of date.

Jerusalem’s light rail system, which opened over budget in the fall of 2011, faced its own set of challenges and controversy, along with hope that it might unite a culturally divided city (a hope that was diminished after riots last summer).

For Tel Aviv, NTA has released maps of the proposed transit lines and a list of benefits to denizens, which include a reduction in pollution and a quicker, more efficient trip to work.

The government and NTA hope to alleviate some of the gridlock from construction by adjusting traffic patterns, adding parking lots outside of town and expanding park-and-ride options (though some say not nearly enough), widening bus lanes and cracking down on private cars catching a ride on those dedicated bus lanes.

Adding to the effort to ease congestion, Israel Railways is planning to ramp up train service during peak hours, and additional buses have been added to the city’s arsenal.

The Tel Aviv police force is also preparing for a seismic shift in the city’s traffic habits by beefing up its staff by 160 officers to oversee the construction, Haaretz reported. Additionally, it will increase the number of workers at its call center to handle the expected onslaught of complaints.

Meanwhile, the Red Line, running between Petach Tikva and Bat Yam, is slated to open in 2021.