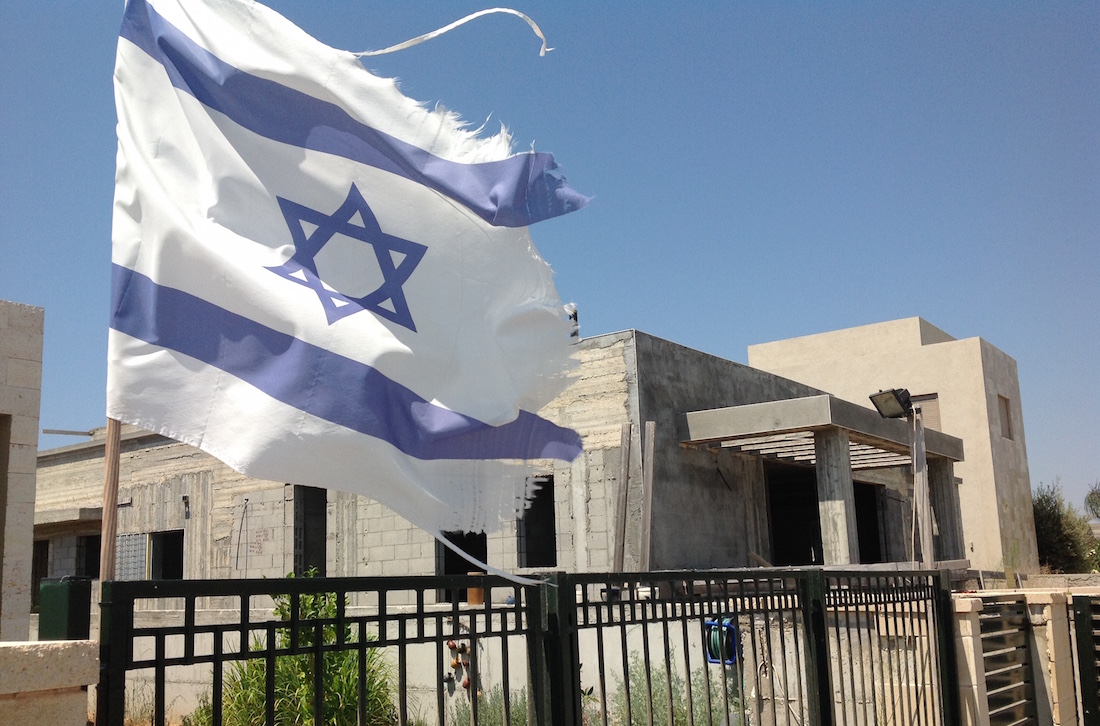 A house under construction for Gaza evacuees in the town of Be’er Ganim. (Ben Sales)
Advertisement

NITZAN B, Israel (JTA) — Ask Aviel Eliaz and Itzik Wazana about their evacuation from Gaza 10 years ago this month and both will tell you it’s like a tree.

For Eliaz, it’s an olive tree sitting in a large pot in his front yard. He planted the tree in 2000 at his former home in the Gaza settlement of Nisanit, only to uproot it when Israel withdrew from the coastal strip. Uprooted, too, were the strip’s 8,000 residents.

His family was resettled along with hundreds of others in this city of cheap plaster prefab houses further up the coast. Eliaz stuck the tree in a pot, figuring he would replant it once he moved into the permanent house the government promised him. Ten years later it’s still there, its growth stunted and its branches thin.

“This is an ongoing trauma of 10 years of temporary life,” said Eliaz, head of the local council that governs Nitzan B. “We live in waiting. That’s how my kids feel. They’re waiting. They don’t have roots. When will we get a home? Will we get a home? We see the light at the end of the tunnel, but there were times we didn’t.”

For Wazana, the tree is metaphorical. He had come to Netzarim, in southern Gaza, to help build a community and settle the land. After the evacuation, he knew that if he didn’t find a renewed purpose, his sense of mission would wither. So he and a group of 20 Netzarim families swapped one settlement for another, founding a new neighborhood in the West Bank city of Ariel.

“We wanted to see where we could take what we had to bring from Netzarim, in ideology, in Torah,” said Wazana, who runs a Jewish learning program for local college students. “It’s like a tree that’s uprooted. It shouldn’t dry out. We should replant it to keep bearing fruit.”

Eliaz and Wazana reflect the two diverging paths that evacuees have taken since the Gaza disengagement. Many have found new homes elsewhere in Israel, in some cases channeling their sense of loss into founding new communities. But more than one-fifth of the 1,600 families removed from Gaza remain unsettled, with many living in temporary houses in Nitzan B, an artificial town meant to function something like a halfway house.

“The state needs to get us out as fast as possible from this site,” said Malka Mordechai, 60, who was among Gush Katif’s founders and still takes antidepressants daily to handle the trauma of leaving. “We’re left here without friends. Just as they took us off of our home and our land, they should take us off this land to stability.”

Complaints of mismanagement have long dogged the process of resettling the Gaza evacuees. In 2010, a scathing government investigation found that the state’s initial budget for the resettlement, roughly $1 billion, was only a fraction of what was necessary. At the time, only 160 families had moved into permanent housing.

Since then, the bulk of the evacuees have been resettled, but roughly 330 families remain without permanent homes mostly due to bureaucratic tangles, personal troubles or some combination of the two. Some had to wait years for housing lots and didn’t have the money to build on them once they were ready. Others were short on cash from the start. Still others claim the government promised them a lot, only to renege.

Friends of Gush Katif, a nonprofit that acts on behalf of the evacuees, says the process is finally nearing its end thanks to a government plan that would place temporary homes on the sites of the building lots where the evacuees are meant to permanently settle. But according to Eliaz, some families may not even be able to afford the price the government is asking for those temporary homes.

Nitzan B, meanwhile, looks almost like a ghost town. Approximately 300 of the 500 families who landed there initially have moved into permanent houses, many in nearby Beer Ganim, a town founded specifically to house Gaza evacuees. The houses of the families were torn down, leaving their lots abandoned and full of weeds. 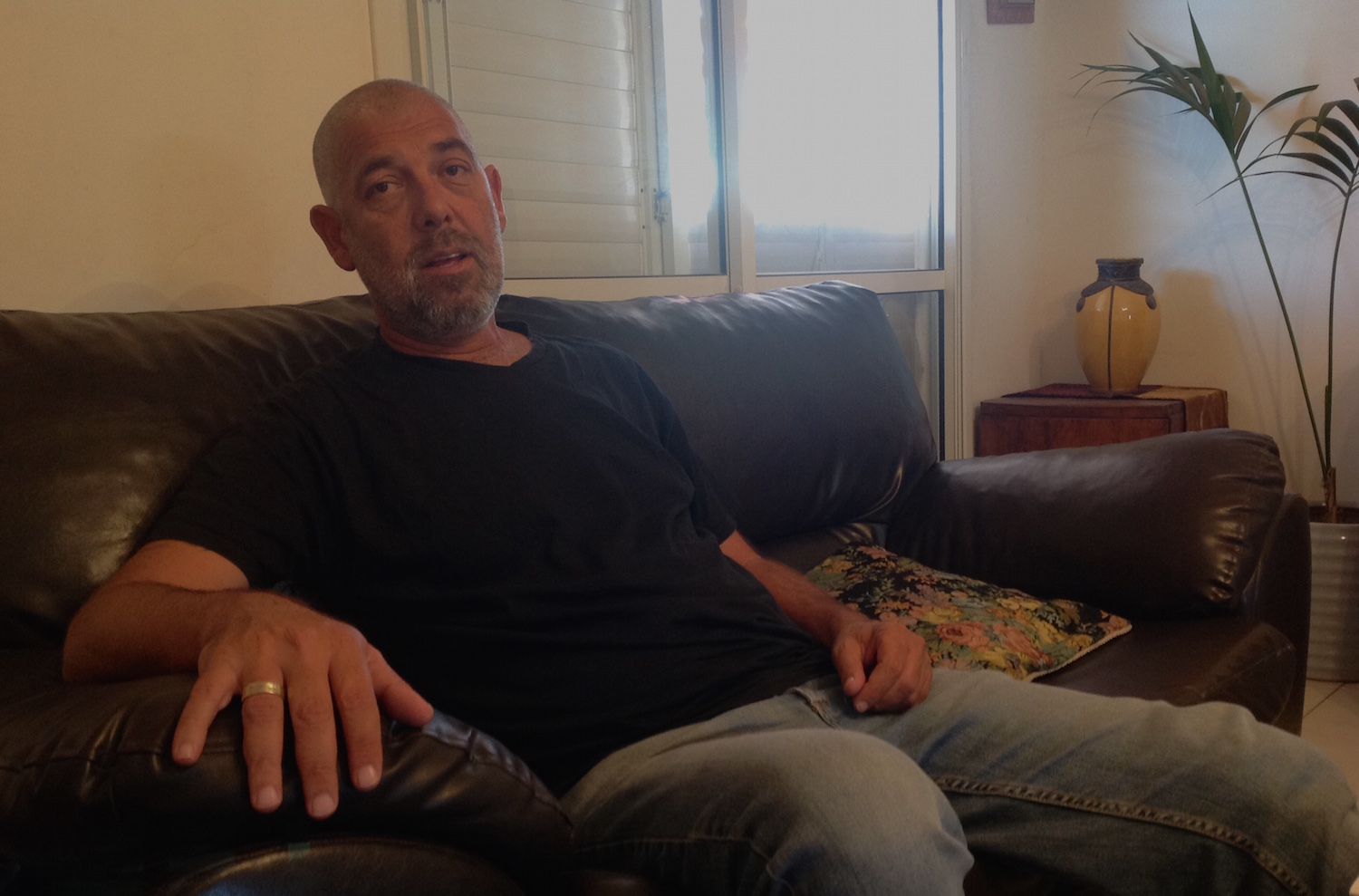 Aviel Eliaz still lives in temporary housing ten years after he was evacuated from Jewish settlements in the Gaza Strip. (Ben Sales)

The houses that are still inhabited are slowly deteriorating, their metal frames showing through the worn-out exterior, forming brown streaks on the walls. Power lines are down and sewage pipes routinely back up. When missiles fall from Gaza, instead of bomb shelters or reinforced rooms, residents make do with large open-ended concrete pipes at the end of each small street.

The town’s offices are adorned with mementos from the Gaza settlements — a road marker pointing to Gush Katif, the cluster of Jewish settlements that once stood across the strip’s coast, or an old sign from a produce store. Inside one of the buildings is an art exhibition marking the evacuation’s 10th anniversary. One piece shows the Israeli flag with one of its six points cut off. Another depicts a house at the end of a seemingly insolvable maze.

“It’s very hard to live here and raise kids here when you see your neighbor moving to permanent housing and the state comes with a bulldozer,” Eliaz said. “There’s a feeling of abandonment, that they forgot us here.”

Eliaz will soon move down the road, to Beer Ganim. The town looks like a huge construction site, as families trickle into new houses while others are being finished.

But difficulties remain there, too. There are few public buildings, some streets lack sidewalks and no permanent synagogue has been completed for the largely religious town. The residents also lack a community center or mikvah ritual bath.

“We have no playground for kids, no basketball court, no soccer field,” said Zipora Ben-Saadon, Beer Ganim’s manager. “They could have done this before we came. Everyone cries and says, ‘Why did we come here? We should have stayed in the temporary houses. There it was better.’”

That sense of regret is common among Nitzan B residents, who refer to the disengagement as “the expulsion.” But Wazana doesn’t share their sentiment. His group has founded a new neighborhood, Netzer Ariel, named after their old one. They organize volunteers for needy families, study programs for students at Ariel University and other community activities. Since a cohort of 20 families founded it decade ago, Netzer Ariel has ballooned to 100 families.

Another Netzarim evacuee, Eliyahu Ozan, took the same ethos in a different direction. Ozan is among the founders of Holot Halutza, a group of three agricultural towns on the Egyptian border. From its original cohort of some 50 evacuee families, Holot Halutza has swelled to 235 families who plant fields of cucumbers, tomatoes, peppers and other vegetables. Ozan said that after the evacuation, the most important thing was to keep building.

“This desire stayed with us,” he said. “We wanted to settle. We looked for the most deserted place in the world and we started to establish something.”

Wazana and Ozan both said that following the trauma of the evacuation, they couldn’t blame the residents of Nitzan B for not moving on. But Ozan said that he feels he has made up for what he lost. Ten years later, he’s happy.

“It’s like having a new child after a child was lost,” Ozan said. “There’s nothing more relieving than that.”