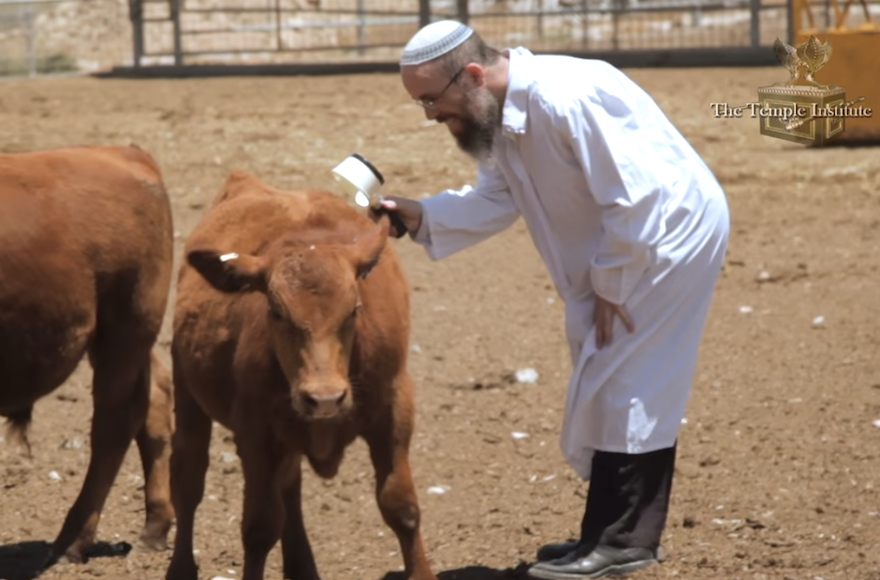 A cow being inspected in a video for The Temple Institute's Indiegogo fundraising campaign. (Screenshot: YouTube)
Advertisement

It’s been nearly two millennia since the Second Temple in Jerusalem was destroyed, bringing to an end the priestly period of Jewish history and commencing the Diaspora.

A third Temple has been prophesied, and in preparation for the messiah, nonprofit Jewish group The Temple Institute wants to build it.

Last month, the institute launched a crowdfunding campaign on Indiegogo with the goal of raising $125,000 to breed a red heifer, a requirement for Temple purification rituals. It has already raised nearly $33,000 from some 500 donors.

“For 2,000 years we’ve been waiting for a perfect red heifer,” said Richman, an institute director in a video for the fundraising campaign. The project, he said, is “nothing less than the first stage of the reintroduction of biblical purity into the world, the prerequisite for the rebuilding of the holy Temple.”

In short, the pitch is: If we breed it, He will come.

Since 1987, The Temple Institute, located in the Old City of Jerusalem, has been committed to returning to the Jewish traditions of ancient times by constructing a Temple to exact biblical specifications.

The recipe to do so requires very specific ingredients, as relayed in the Torah and the Talmud. To date, the institute has said it has completed the sacred garments of the high priest, and last year, it successfully raised over $100,000 to make architectural plans for the Temple. Now for a biblical bovine.

“The challenge is to raise a red heifer according to the exact biblical requirements here in the Land of Israel,”said Richman in the video. “It’s time to stop waiting and start doing.”

In the Book of Numbers, the Israelites were commanded to use “a red heifer without spot, wherein is no blemish” as a ritual sacrifice whose ashes would be required for the priests’ sacred rites. Red heifers are extremely rare, according to Jewish tradition, with only a handful said to have ever existed.

The institute has been seeking such a cow since for nearly three decades, even collaborating with Evangelical American breeders. After identifying a few promising cows that ultimately didn’t pass muster, the institute is rolling up its sleeves.

Working with an Israeli cow herder, using “state-of-the-art technique” and “under strict rabbinical supervision,” the institute hopes to produce a herd of red heifers. From the herd, they will select a “proper candidate” to fulfill the commandment.

The Temple Institute has elected to run a Flexible Funding campaign, meaning it keeps all donations even if it does not hit its ultimate goal. Donor levels begin at $18, which earns the giver the satisfaction of knowing she’s done “a mitzvah.” At the highest level, $25,000, donors receive a private tour of the cattle ranch and updates on the status of the calf.

The project is controversial, of course. The site of the ancient Temples, and thus the prescribed site for the new one, is on Jerusalem’s Temple Mount, where sites holy to Muslims – the Dome of the Rock and the Al-Aqsa mosque – have stood for 13 centuries.

The Temple Institute has admitted that the mosques must be cleared for the building of the Temple to begin. (One peace-seeking group, however, thinks there’s room for everyone.)

Despite these sizable obstacles, some Israelis are supportive of the institute’s ultimate aim. Haaretz reported in 2013 that nearly a third of secular citizens surveyed in a poll supported the building of the Temple, and the numbers rise for religious Jews.

After the fundraising campaign is complete, the plan is for red cow embryos to be deposited in surrogate mother cows – what Haaretz referred to as essentially bovine Virgin Marys. When birthed nine months later, rabbis will determine if any of the offspring meet the strict kosher cow standards.

If so, they will be ritually sacrificed and burned at age 2, allowing newly purified priests to ascend the Temple Mount. Then, according to South Park, the holy wars begin.