At L.A. Jewish Journal, president and publisher face off on Iran deal — and stay friendly 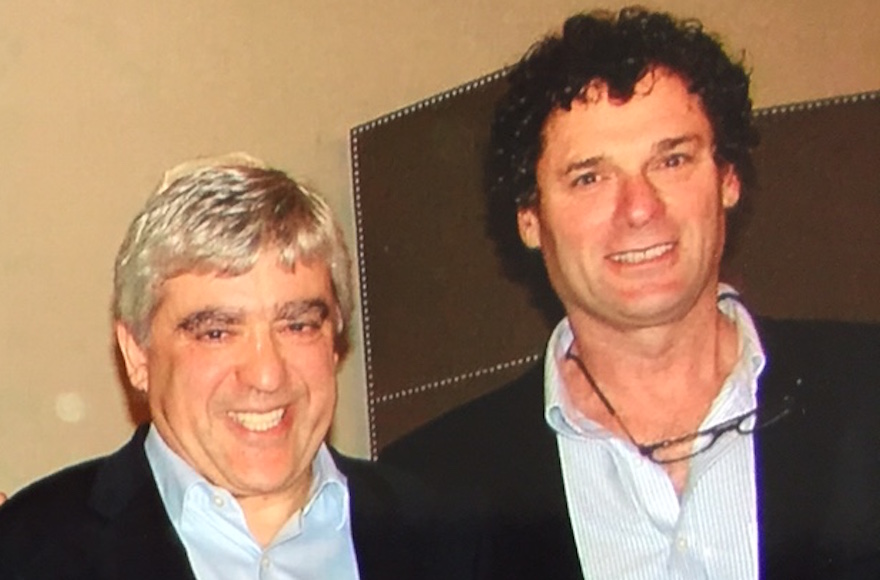 Open up the pages of the Los Angeles Jewish Journal these days, and you’re likely to find vigorous debate about the Iran deal.

And that’s just between the newspaper’s president, David Suissa, and its publisher and editor-in-chief, Rob Eshman.

The two have been going head-to-head on the nuclear agreement between world powers and Iran in column after column for the month since it was announced on July 14.

“A flawed deal will make America and Israel safer than a failed deal,” Eshman wrote in his latest Jewish Journal column, published Monday. “We need to accept it and focus on strengthening our position vis-à-vis Iran in every way possible, including increased aid to Israel.”

Now here’s Suissa, in one of his recent weekly columns, writing about the deal: “It’s full of nasty surprises … I don’t care if you’re Republican or Democrat, this fine print stinks.”

But if you think Suissa and Eshman are battling it out in the halls of the Jewish Journal’s offices or that someone’s job is on the line, think again. Both men say they benefit from and respect the other’s perspective.

“I love the fact that we have diametrically opposed positions in the same paper,” said Suissa, who as president of TRIBE Media Corp. oversees the Jewish Journal’s business operations.

“I respect Rob tremendously; I love the way he writes,” Suissa told JTA. “We’re very much on the same page in terms of wanting to have a paper that includes the broadest possible range of views. We really try to put our money where our mouth is. I piss off one half of the community, and he pisses off the other half.”

Eshman said: “Yes, it is unusual that the two people who are the most prominent voices of the paper disagree on Iran. Then again, we disagree on a lot of issues — and I think that is what sets the Jewish Journal apart from other Jewish (and non-Jewish) media companies.”

He noted that the paper presents viewpoints ranging from the hard-right of the Zionist Organization of America to the far left of Jewish Voice for Peace, a group that the Anti-Defamation League has called one of America’s Top 10 anti-Israel groups.

“We really treat our paper and websites as true community forums, and if you have a smart, original and well-written opinion, you are in the community,” Eshman said.

As for his disagreements with Suissa, Eshman said hashing them out is often the most fun he has during the day. In any case, Suissa is a partner, not a boss. Both men answer only to TRIBE’s board, which has not once interfered with editorial matters, according to Eshman.

In their columns, too, each has been careful to urge respect for the other side.

“Even though I am for the deal, I fully respect the opinions of people who have come to another conclusion — that’s why you can turn the page of this newspaper or scroll our website and find columnists who disagree with me,” Eshman wrote in his column on Monday.

Suissa echoed that in his column on Tuesday: “It’s important not to demonize the proponents of the deal, who also want what’s best for America, Israel and the world. I may see things differently than they do, but I can’t impugn their motives.”

With so much public vitriol being exchanged between opponents and supporters of the Iran deal, including in the Jewish community, perhaps something can be learned from the comity at the Jewish Journal.