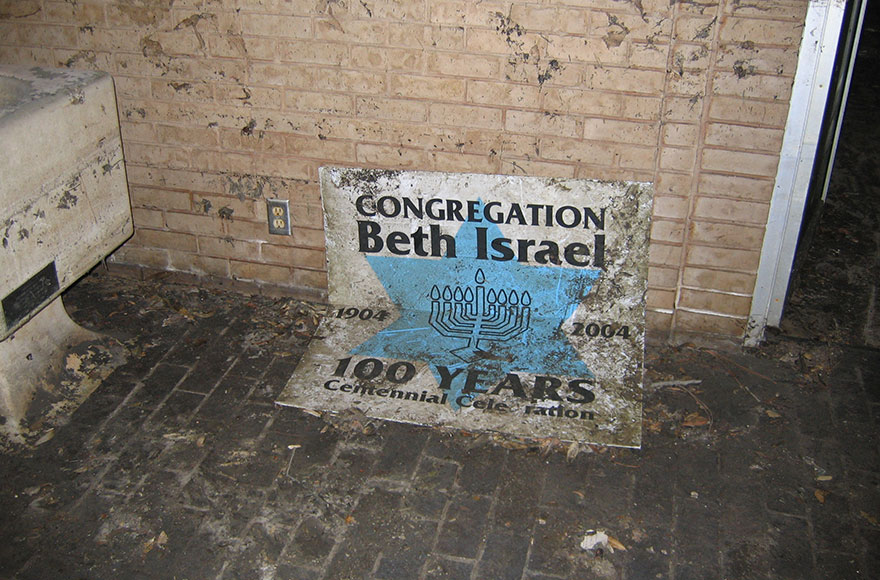 NEW ORLEANS (JTA) — One rainy afternoon earlier this summer, Rabbi Gabe Greenberg stood on the backyard patio of the new Beth Israel synagogue telling the story of the deluge that destroyed the Orthodox congregation’s Lakeview neighborhood building. Most of the now 111-year-old synagogue’s possessions were ruined by the 10 feet of water that filled the premises when Hurricane Katrina triggered massive flooding a decade ago this month.

The remains of more than 3,000 of its holy books are now buried under a mound of dirt at the nearby Ahavos Sholem cemetery. Stacked on top of each other in a nearby grave are the disintegrated parchments of seven Torah scrolls that didn’t survive the storm.

READ: Why I returned to New Orleans

Those traumatic memories haven’t faded for this aging congregation. But as Greenberg was quick to point out, the view from the patio tells the story of how it survived. In 2012, Congregation Beth Israel erected a new building in the northwest suburb of Metairie. Visible beyond the backyard fence is Gates of Prayer, the Reform synagogue that lent the congregation prayer space during its seven years of homelessness. And etched into the patio bricks are the names of synagogues and Jewish organizations whose donations kept the congregation afloat as it regrouped. 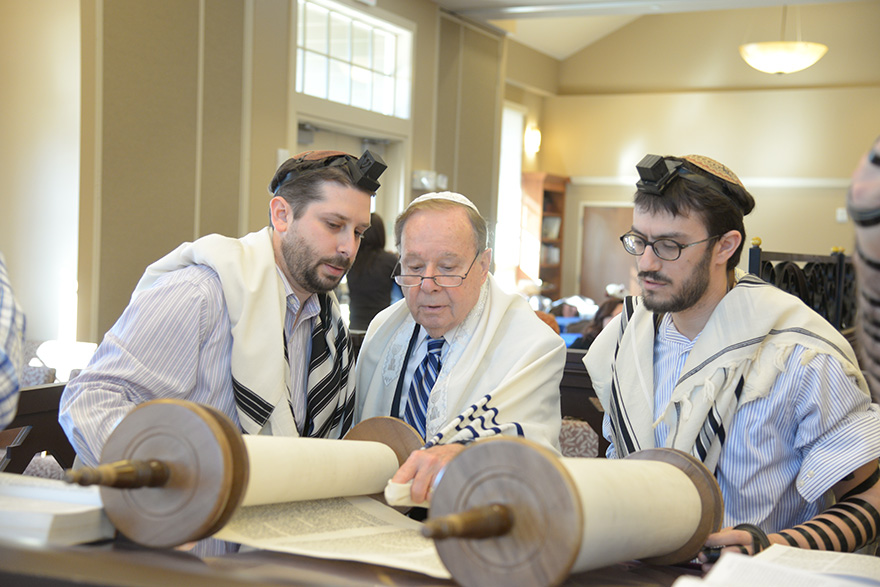 In a sense, Beth Israel is emblematic of how New Orleans’ small Jewish community recovered from Katrina, rebuilding from the ground up in the face of colossal property damage and population decline. As Greenberg, a 33-year-old Massachusetts native who began his tenure last year, said: “There’s a lot of pride.”

Ten years on, many parts of New Orleans still bear scars left by the storm. After the levees were breached on Aug. 29, 2005, flooding swallowed neighborhood after neighborhood, causing a reported $100 billion in damage and displacing more than 400,000 people. Most devastating, though, were the deaths of 2,000 people across the Gulf Coast region.

Today, the Lower Ninth Ward, a low-income and historically black neighborhood where hundreds of blighted homes were demolished, dozens of hauntingly vacant lots have been claimed by overgrown flora. The city’s population, about 465,000 before mass pre-storm evacuations, is now about 384,000, despite a positive growth rate since 2005.

No Jewish deaths were reported as a direct result of Katrina, but more than 80 percent of Jewish homes were battered and damages to communal institutions totaled $20 million. Most of the city’s 9,500 Jews fled New Orleans, seeking shelter with family and friends in Baton Rouge, Houston, Atlanta and other cities across the country.

For New Orleans’ Jews, the havoc was compounded by an already sagging community infrastructure that had been deteriorating for years before the storm, plagued by unmet fundraising goals, a steady outflow of young people and a struggling day school, Jewish Federation of Greater New Orleans executive director Michael Weil told JTA. Katrina brought several years of uncertainty as the Jewish population plummeted to 5,200 in January 2006, and it was unknown if the thousands who left would ever return. 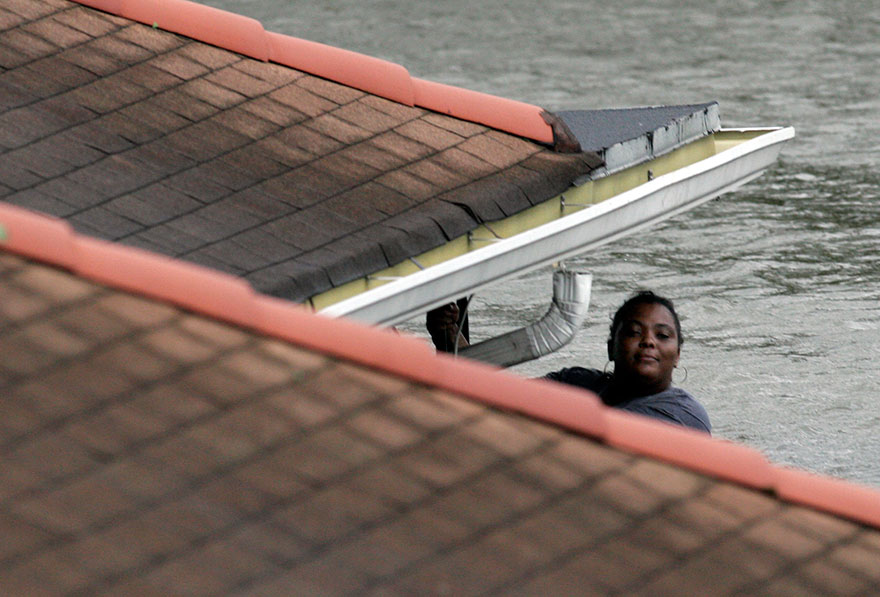 A woman hanging from her roof waiting to be rescued after Hurricane Katrina slammed New Orleans, Aug. 29, 2005. (Chris Graythen/Getty Images)

As the Jewish community marks the 10th anniversary of Katrina, that anxiety has largely faded. There are now an estimated 10,000 Jews in the city, about 2,000 of whom moved here after 2007, when the New Orleans federation introduced a program offering $1,800 grants to newcomers, 81 percent of whom were under 40. They helped offset the 1,800 or so people — mostly elderly evacuees — who did not return. The retention rate, Weil wrote in a 2013 report, is more than 70 percent. Since Avodah, a national service organization that coordinates nonprofit internships for 10 college-age Jews each year, opened a New Orleans branch in 2007, “some 75 percent of its alumni” stayed in the city after their program ended, according to the report.

READ: Israeli-American chef brings hummus and shakshuka to the city of gumbo and crawfish

Many agree that piecing the community back together fostered a newfound spirit of collaboration across institutions and denominations in this Reform-dominated city. As Cait Gladow, a New Orleans federation spokeswoman, put it: Katrina has had a “lemons to lemonade” effect. During summer months, the local Reform synagogues — Touro, Temple Sinai and Gates of Prayer — rotate hosting Saturday morning services for the three congregations. With Chabad overseeing the city’s lone mikvah, Greenberg told JTA that there is talk of Beth Israel and Shir Chadash, a Conservative synagogue in Metairie, joining forces to build an alternative. 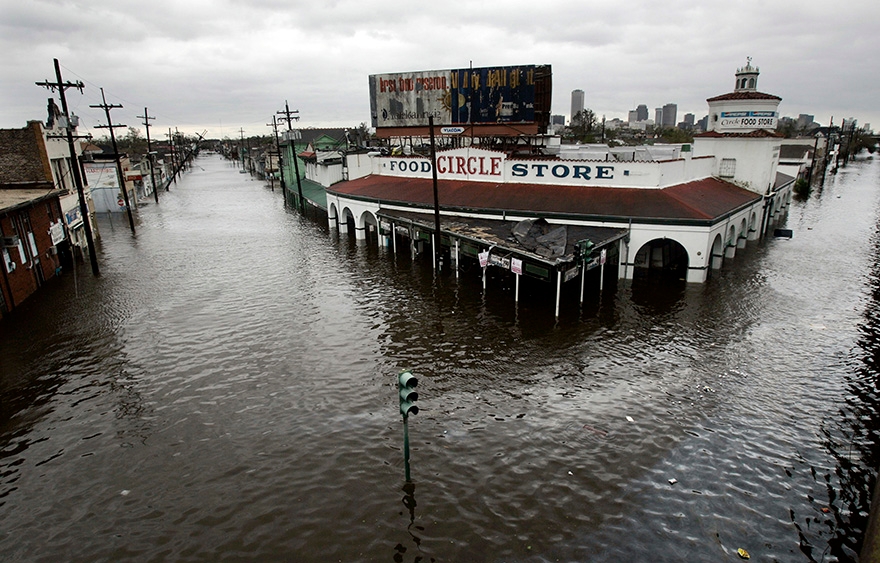 Allan Bissinger, who was the federation’s president in the aftermath of Katrina, noted that among New Orleans Jews, “there still is a lingering sense of community — that’s one of the legacies of Katrina.”

Indeed, most of the city’s Jewish institutions have recovered fully or continue to make headway. In Metairie, the Chabad-run Torah Academy, wrecked during Katrina, opened a $5.7 million facility last year. A few blocks away, the Community Day School, which occupies a wing of the Goldring-Woldenberg Jewish Community Center and features a kosher cafeteria, is expecting a student body of 37 in September. Enrollment falls far short of the 90 who attended when Katrina hit, but it’s still a 37 percent increase from 2013, when “Jewish” was removed from the school’s name in a controversial bid to recruit students from less-observant families.

While a 2010 federation survey found that 85 percent of New Orleans Jews belong to a synagogue — nearly three times the national average reported in the 2013 Pew survey — attendance remains a glaring source of concern for rabbis of the Crescent City. David Polsky, the energetic 37-year-old New York-born rabbi at Anshe Sfard, an Orthodox congregation in the historic Garden District, said younger downtown Jews have become regulars in recent years, though Shabbat attendance peaks at 30 or 40.

Beth Israel hasn’t staged a daily minyan since Katrina and draws a group of about 30 on Shabbat, but the congregation’s “pulse is good,” said Greenberg, who spent a year at the Hillel of the University of California, Berkeley, before landing in New Orleans. He said hosting a daily minyan is a long-term goal, along with attracting more of the 20-somethings who have flocked to New Orleans in recent years to capitalize on the city’s swelling post-Katrina economy.

In an effort to reach those young, unaffiliated Jews, many of whom live in New Orleans proper, Gates of Prayer, which dropped to 450 member families after Katrina from 480, is moving to decentralize the synagogue experience by hiring a Tulane University and Hebrew Union College-Jewish Institute of Religion graduate named Alexis Pinsky as assistant rabbi to hold roving Shabbat services in coffee shops, restaurants and bars across the city. 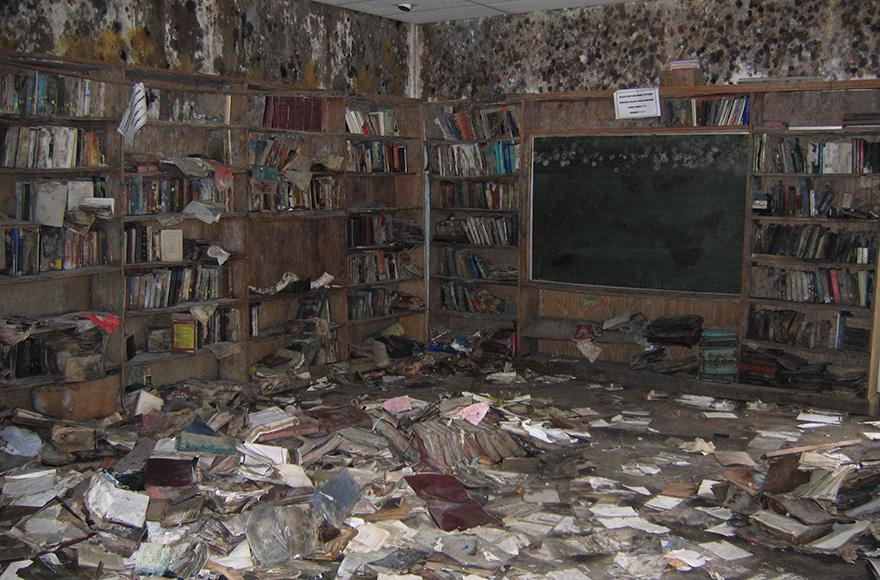 The library at Congregation Beth Israel was destroyed in Hurricane Katrina. (Adam Magnus)

While Jewish leaders have turned their attention to more quotidian concerns, like synagogue attendance, after a decade of recovery, Katrina, and the feeling of trauma and profound loss it still evokes, is an inextricable part of communal identity. And it carries a complicated resonance as Jews here look to the future.

For newcomers like Jessie Wilson, 28, the way forward is tricky to navigate.

When she came here in 2012 from College Station, Texas, after her husband, a petroleum engineer, was hired by Shell, she said she felt disconnected from the loss-and-renewal narrative, especially at Beth Israel, where she is a member.

“I wish there could be more of a sense of why the community needs to be here outside of the context of Katrina,” she said from her living room in Metairie, down the street from the Chabad synagogue, where her husband sometimes worships. 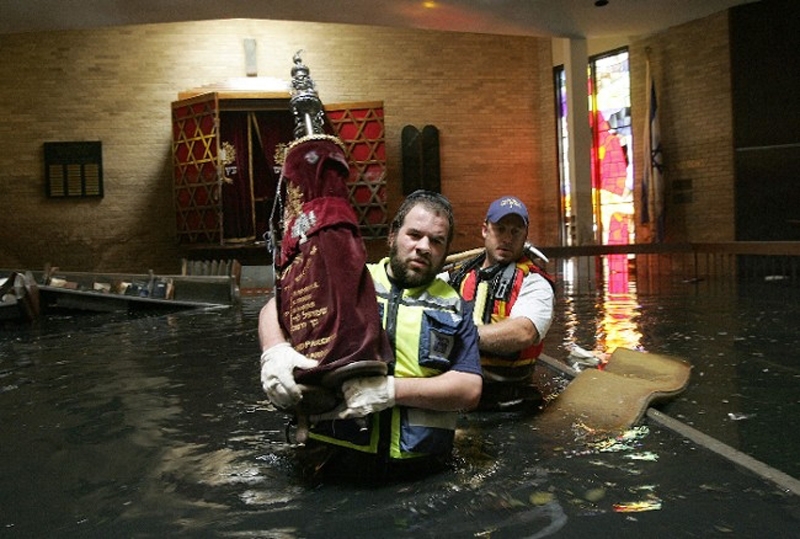 Still, Wilson acknowledged that those who lost their homes and possessions “get a tremendous amount of strength from remembering what they went through,” and she, in turn, takes great comfort in knowing that if New Orleans’ Jews withstood disaster once, they can do it again.

When Greenberg interviewed for the Beth Israel job in 2013, the hiring committee, he said, was insistent that he understand how much Katrina was still a part of the congregation’s identity. He likened some of the elderly members to grandparents reminiscing about the old country, not over the agony of displacement necessarily, but the fond nostalgia for how life used to be.

“There is a generation gap. It really is a schism in their history,” he said of lifelong New Orleanians. Newcomers, he added, are “respectful and honor Katrina. But it’s not a part of their narrative.”

The gap can hardly be described as a conflict, but it has left some, including Wilson, slightly unclear about how Jewish New Orleans will choose to portray itself as more and more newcomers assume leadership roles in the community. Like the bulk of New Orleanians, everyone who lived here in 2005 has a Katrina story of evacuation, property damage or worse, and often both. 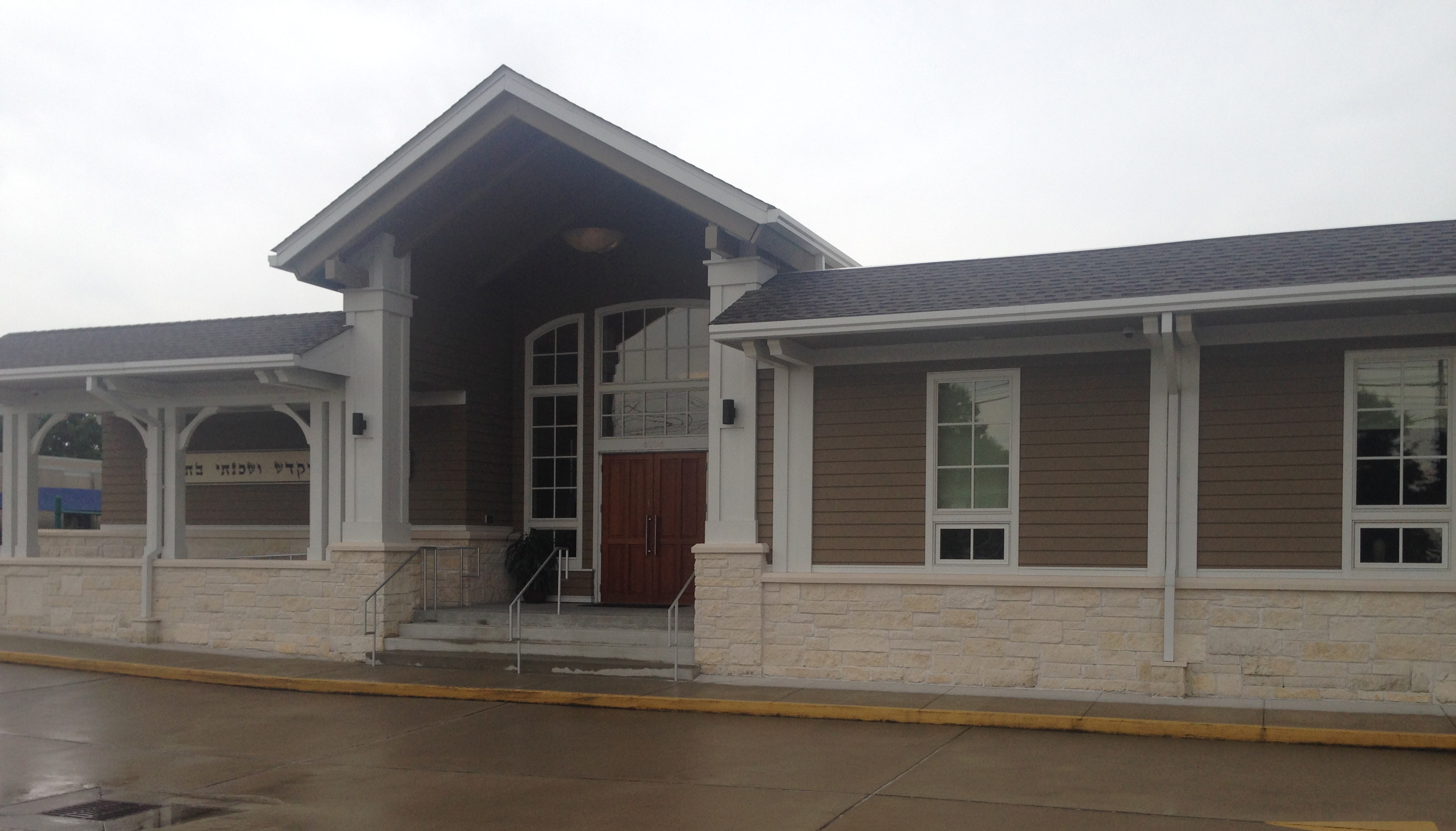 The exterior of the rebuilt Congregation Beth Israel in Metarie, La. (Josh Tapper)

Bradley Bain, a 37-year-old software engineer, grew up in New Orleans, attended college at the University of Texas, Austin, and moved back to his hometown three years ago as part of the newcomers program. He marveled at the surge in Jewish engagement — his wife, for one, is involved with Hadassah and sits on the board of Chabad’s Torah Academy — but worried about the repercussions of placing the Katrina experience at the center of New Orleans Jewry.

“People are scared about losing something that can galvanize the community as effectively as it did,” he said. “We need to shift our energies from Katrina recovery mode to community building without a crisis.”

Perhaps, he wondered on a rainy Thursday in Metairie, if New Orleans’ Jews willfully close their Katrina chapter, the community’s raison d’etre would vanish. Beth Israel’s 10-year Katrina anniversary event on Aug. 23 appears to be an effort to turn the page: It’s called “10 Years Forward.”