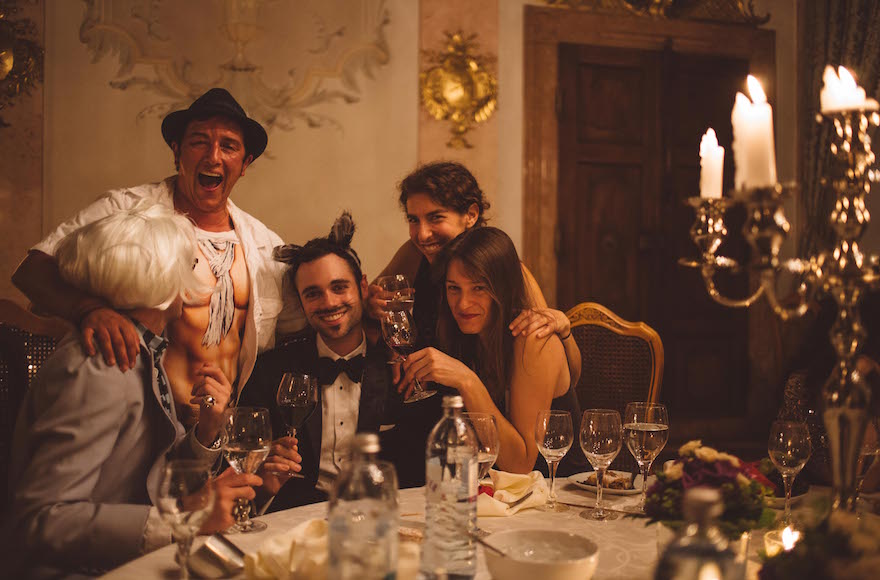 Robert Saferstein, second from left, with Jewish gay activists in Salzburg on Aug. 12, 2015. (Eighteen:22/Picture on the Fridge)
Advertisement

SALZBURG, Austria (JTA) — At one of this Alpine city’s finest hotels, an Argentinean Jew in a priest’s vestments is waltzing with a Jewish transgender woman from New York.

Nearby, an African-American Jew is swaying to the sounds of Johann Strauss while embracing a bearded man from Hungary. Spectators from 22 countries gather around in colorful costumes to watch those brave enough to dance.

The scene last week at the Hotel Schloss Leopoldskron in Salzburg was a highlight of a three-day conference for some 70 young Jewish lesbian, gay, bisexual and transgender activists from around the world. They gathered to launch an international Jewish gay organization called Eighteen:22 — a reference to the passage in Leviticus prohibiting gay sex — just two weeks after the deadly stabbing of a 16-year-old girl at the Jerusalem gay pride parade.

The tragedy hung over the gathering. There was a commemoration ceremony for the victim, Shira Banki, and passionate fulminations against Israel’s government for failing to stop the perpetrator, Yishai Schlissel. A haredi Orthodox fanatic, he recently had been released from jail for stabbing three people at the same parade in 2005.

Yet the Salzburg conference, which was organized by Eighteen:22 founder Robert Saferstein as part of the Connection Points program of the Charles and Lynn Schusterman Family Foundation, was no solemn affair. Participants came to network, strategize and celebrate recent advances in the fight for LGBT acceptance in Jewish circles.

Gay-friendly legislation in Europe, Israel and the United States — where this week a Jewish woman became the first openly transgender White House official — is “setting the tone for the same movement within Jewish communities, which are not islands,” said Hannah Elyse Simpson, a Jewish transgender woman from New York. “The direction we are heading is clear and irreversible, but is raising fierce opposition.”

At the dance, Simpson wore a painted beard as a tribute to Conchita, the transgender Austrian whose victory at the 2014 Eurovision Song Contest highlighted Austria’s embrace of gays. This year Vienna unveiled gay-themed stoplights at central pedestrian crossings.

Tamas Buchler, a gay rights and Jewish community activist from Budapest, said that despite rising xenophobia in his native Hungary, “these days gay men can walk around hand in hand around the capital with little fear.” That would have been unthinkable 20 years ago, he noted.

Last year, the Jewish Community of Budapest elected as its CEO a 36-year-old convert to Judaism, David Schwezoff, despite opposition by hardliners who said he was gay because he used to perform at a cross-dressing club. Chalking his crossdressing up to youthful follies, he denied being gay.

“We still have a long way to go before we catch up to Austria,” Buchler said, “but that’s where we are heading.” 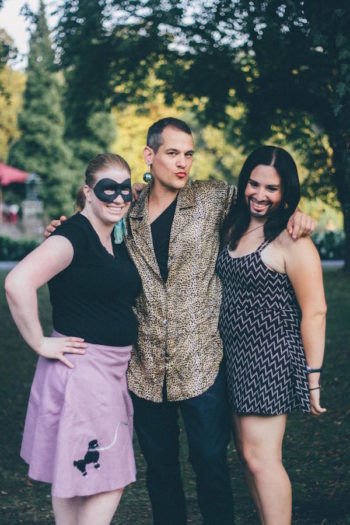 Hannah Elyse Simpson, a Jewish transgender woman from New York, right, with Jewish gay activists on Aug. 12 in Salzburg. (Eighteen:22/Picture on the Fridge)

In Mexico, Eli Nassau founded Guimel, the first openly LGBT Jewish initiative in the country, in 2012.

“Our group had two precursors in 1994 and in 2009, but they were almost secret societies,” Nassau said. “That we now have events, sometimes with the Jewish community, is a sign of the times.”

Of the countries represented at the conference, only Israel, the United States and Canada have organizational frameworks specifically for religious LGBT Jews.

It has been a tough summer for the LGBT community in Israel, despite the strides gays have made generally in the Jewish state. Two days prior to the parade stabbing, two men severely beat three transgender women sitting at a café in Haifa, nearly gouging out one woman’s eye. In June, a transgender woman was beaten and hit with food at Tel Aviv’s Azrieli mall.

These incidents are part of a rising tide of hate crimes in Israel, according to the Tel Aviv-based Nir Katz Center against LGBT Violence. Its 2014 report documented dozens of physical assaults against LGBT individuals, and hundreds more incidents of discrimination.

“It has been a horrible year. But, in parallel, gay Israelis are becoming better organized and legally equipped to deal with the attacks, with new allies coming out in their defense,” Gal Ochovsky, an Israeli gay rights advocate and award-winning director of the films “The Bubble” and “Walk on Water,” said at the conference in Austria.

He noted the creation of the Nir Katz watchdog group in 2012, and the fact that Israel’s defense minister, Moshe Yaalon, published a string of videos supporting the LGBT community ahead of elections in March.

The parade stabbing led to some positive consequences, too. Following the stabbing, Jerusalem’s chief rabbi, Aryeh Stern, posed for pictures with one of the six victims.

This was “an extremely powerful expression of solidarity that the murder prompted,” said Robert Saferstein, an Ohio-born Jew who organized the conference and founded Eighteen:22. “While the murder exposed the depth of hatred, it also made many Orthodox rabbis defend LGBT people’s right to safety and dignity.”

(The Charles and Lynn Schusterman Family Foundation sponsored Cnaan Liphshiz’s trip to Austria. It had no role in the writing or editing of this story.)