U.N. nuclear watchdog rejects AP report that Iran will do own inspections 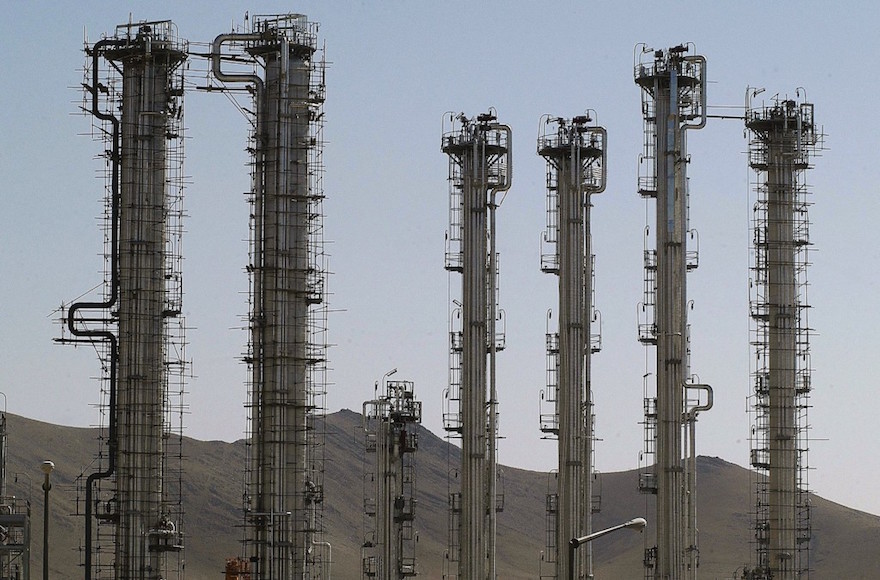 (JTA) — The International Atomic Energy Agency, which will control inspections of Iran’s nuclear program under the recently finalized agreement, said a report that Iran will conduct its own inspections is inaccurate.

The Associated Press reported Wednesday on an agreement signed between the IAEA, the nuclear watchdog of the United Nations, and Iran that would let experts and equipment chosen by Iran inspect the Parchin military complex on behalf of the IAEA. Iran has been suspected of nuclear weapons research at Parchin. The Iranian inspectors would then report their findings to the IAEA.

But the head of the IAEA said the report “misrepresents” the arrangement, according to Reuters, which did not provide further detail on his denial.

“I am disturbed by statements suggesting that the IAEA has given responsibility for nuclear inspections to Iran,” IAEA Director-General Yukiya Amano said, according to Reuters. “Such statements misrepresent the way in which we will undertake this important verification work.”

Earlier Thursday, the IAEA said it was satisfied with arrangements it had made with Iran concerning inspection of military facilities, Reuters reported.

“The separate arrangements of the roadmap are consistent with IAEA verification practice and they meet the IAEA requirements,” IAEA spokesman Serge Gas said in a statement.

The administration is “confident in the agency’s technical plans for investigating the possible military dimensions of Iran’s former program,” Price said, according to AP. “The IAEA has separately developed the most robust inspection regime ever peacefully negotiated.”

The report’s revelation met harsh criticism from Israeli and American opponents of the deal. On Wednesday, Israeli Energy Minister Yuval Steinitz, the government’s point man on Iran, released a bitingly sarcastic response to the report.

“One must welcome this global innovation and outside-the-box thinking,” he said. “One can only wonder if the Iranian inspectors will also have to wait 24 days before being able to visit the site and look for incriminating evidence?”

Steinitz was referring to a provision in the original agreement that allows for a 24-day waiting period before international inspections of undeclared sites with suspected nuclear activity. That deal eases sanctions on Iran in exchange for restrictions on its nuclear program.

“This side agreement shows that true verification is a sham, and it begs the question of what else the administration is keeping from Congress,” said Rep. Kevin McCarthy of California, the majority leader in the U.S. House of Representatives, according to the Times of Israel.

John Cornyn of Texas, the second-ranking Republican senator, said, “Trusting Iran to inspect its own nuclear site and report to the U.N. in an open and transparent way is remarkably naive and incredibly reckless. This revelation only reinforces the deep-seated concerns the American people have about the agreement.”

Under the agreement, the IAEA allows Iran “to employ its own experts and equipment in the search for evidence or activities that it has consistently denied — trying to develop nuclear weapons,” the AP article said.

While the document obtained by the AP is a draft, and not the final version of the agreement, one official familiar with its contents told the news service it “doesn’t differ substantially from the final version.”