When the Hasidim come to Norman Rockwell country 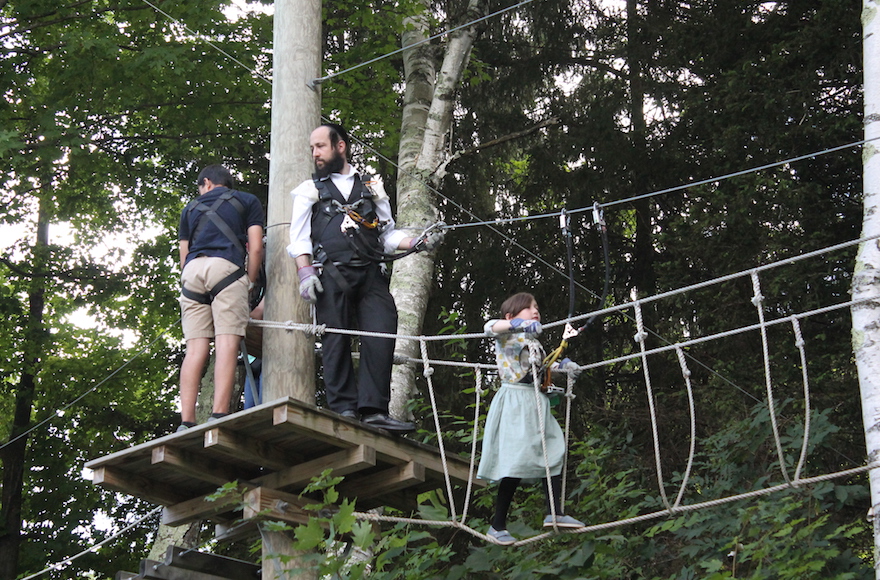 HANCOCK, Mass. (JTA) — The lazy days of August have a special flavor in the rolling hills of the Berkshires, in western Massachusetts.

The flowers are blooming in dazzling colors, the corn at roadside farm stands is delectably sweet, the lakes are refreshingly cool, and the area’s picturesque New England villages are chock-full of families wandering between antique shops, bookstores and ice cream parlors.

But in recent years, the tide of summertime visitors has brought with it a new constituency not much seen before in these storied hills: haredi Orthodox Jews.

For the most part, the haredim seem to be heading to one place: Jiminy Peak, a ski resort along the Massachusetts-New York border. Like many such mountains, during the summer season it transforms into an adventure park replete with alpine slides, high-ropes courses, zip lines, mountain biking and scenic chairlift rides. But Jiminy Peak is unique in that it also features a kosher cafeteria for about three weeks in August, courtesy of Chabad of the Berkshires, along with regular prayer services and even separate swimming hours for men and women. 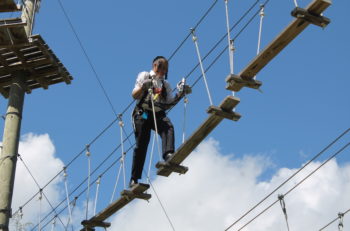 “This is really a service for the Jewish community, not necessarily a profit thing,” said Rabbi Levi Volovik of Chabad of the Berkshires, which is located about 20 minutes away in Pittsfield. “Jews started coming to Jiminy Peak and using our services, and our shul. As they started growing, Jiminy Peak requested our help to coordinate.”

This is the third consecutive summer that Chabad has operated the kosher cafeteria, which sells pizza, falafel, fries and ice cream (it’s cholov yisroel, a more stringent form of kosher dairy). A corner of the cafeteria is set aside as a makeshift synagogue and study hall, and there are Talmud classes in the evenings. Many of the Orthodox visitors stay at the all-suite Jiminy Peak Country Inn at the mountain’s base lodge, where every unit has a kitchenette.

“It’s nice and scenic and the kids are happy,” Chaya Klein of Lakewood, New Jersey, said during a recent visit with her husband and five children. “It’s very peaceful here.”

It’s not clear how Jiminy Peak became a stop on the haredi vacation circuit. Orthodox Jews long have summered in the Catskills. The Berkshires, an area steeped in WASPy culture, became popular among more liberal Jews several decades ago.

Whatever the reason, word about Jiminy Peak clearly has spread in the strictly Orthodox community.

“It definitely provides a lot of business for us,” said Katie Fogel, director of marketing for Jiminy Peak. “We don’t necessarily market to that segment. We started working with Chabad of the Berkshires because we noticed an increase in visits among that population and decided that we would partner with them to make it the best experience we could.” 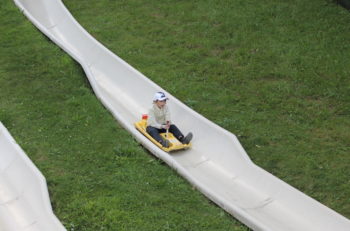 Orthodox Jewish visitors wear hats or tuck their yarmulkes into pockets to keep from losing them on the alpine slide. (Uriel Heilman)

On a recent August afternoon, young and old Jews and non-Jews alike waited in line for the mountain coaster. When boarding, the Orthodox men tucked their yarmulkes into their pockets to keep them from flying off during their high-speed descent down the track.

A Jiminy Peak staffer at the disembarkation point, a girl in her teens who was instructed by an administrator not to provide her name, told JTA that mountain staffers hadn’t been given any cultural sensitivity training.

“We don’t know anything about them,” she said of the haredi Jews. “I wish I did.”

At the chairlift, which whisks passengers to the top of Jiminy’s alpine slide, a teenage girl wearing a bright-orange staff T-shirt and khaki shorts hoisted a young boy with peyos sidecurls onto a chair. As they ascended, the boy’s father’s ritual fringes flapped in the air.

Families congregated around the bungee trampoline watching their little ones bounce up and down. Nearby, little children in big black velvet yarmulkes and matching outfits stared wide-eyed at screaming teens aboard the giant swing.

Most of the excitement seemed to be up on the high-ropes courses at the adventure park, which combine rope bridges, zip lines, cargo nets and other challenges up in the trees. About 20 feet in the air, a young girl in a long skirt and black stockings wearing a safety harness ventured out onto one of the airborne obstacles as her father waited behind her on a small wooden platform attached to a tree trunk. Her mother watched warily from below, rocking an infant on her hip and holding a stroller with her free hand. Behind her, dozens of young children romped around the playground, jabbering excitedly in Yiddish.

Menachem Tzvi Eisenberg, 18, came back to Jiminy Peak this summer after a visit last year with his grandparents. He said the adventure park is his favorite feature. 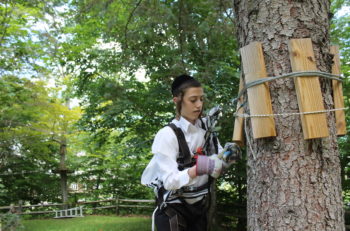 The adventure park at Jiminy Peak is one of its most popular summertime features. (Uriel Heilman)

“The rope course made me feel very accomplished because I was scared,” said Eisenberg, a Lakewood native. “It’s very high up, and the ropes were shaky. It helped me overcome my fears. It showed me I could do this.”

When it rained on the second day of his visit, Eisenberg and his family tried two nearby bowling alleys and the Crane Museum of Papermaking, but they were all closed.

“What we planned Hashem didn’t want,” he said with a shrug.

Most of the Orthodox visitors on a recent August afternoon appeared to be from the Orthodox strongholds of Lakewood and Monsey, New York, but Orthodox groups and camps also organize bus excursions to the mountain. Many visitors come for just a night or two, loading their minivans with kosher food and sundries they can eat without having to kosherize the kitchens in their hotel. Their visits are practically all midweek; the mountain’s rides violate Sabbath-day restrictions.

Orthodox Jews are hardly the only visitors to Jiminy Peak in summer, but the hills are alive with the sound of Yiddish especially during the peak Orthodox vacation season, after the three-week mourning period of Tisha b’Av, which this year fell on July 26. The kosher food operation at the mountain run by Chabad is open this summer until Aug. 26, and the rides at Jiminy will stay open until late October.

Then, in November, the mountain reopens for skiing.