Iran deal will pass (or so says the math) 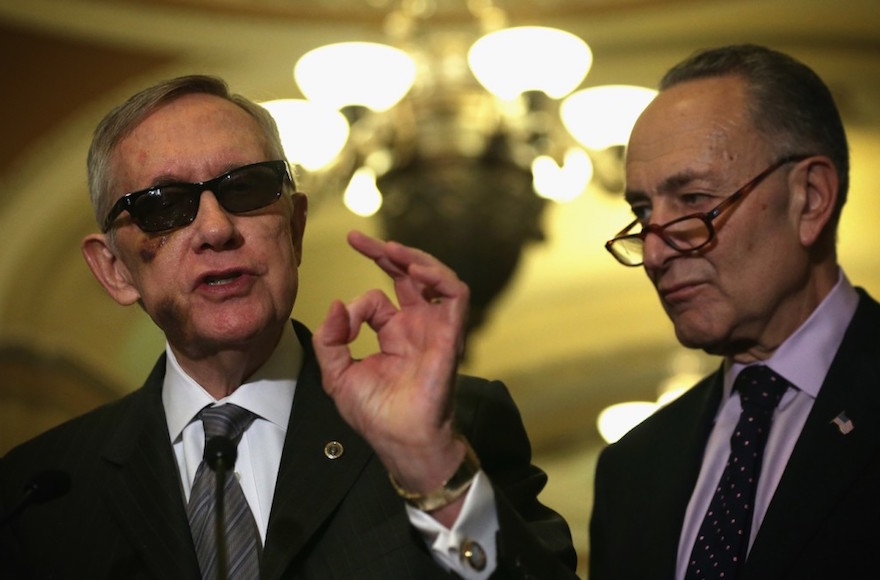 (JTA) – Does the Iran deal have the votes or not?

Though President Barack Obama is vacationing on Martha’s Vineyard and Congress is in recess through Labor Day, there’s plenty of action on the agreement as lawmakers debate whether to vote with their colleagues, constituents, aides or consciences — or some combination therein.

The deal’s chances in Congress

With Obama having vowed to veto any disapproval of the deal, both houses of Congress would have to muster veto-proof majorities — 290 in the House, 67 in the Senate — to kill the deal. If the Republicans vote as a bloc against the deal, as seems likely, its opponents would need 44 Democrats in the House and 13 in the Senate to reach the two-thirds majority necessary to override the veto.

That’s unlikely to happen in the Senate, which is why few analysts are even bothering to count votes in the House. (If the Senate cannot override Obama’s veto, it doesn’t matter what happens in the House.)

READ: A tally of how Jewish lawmakers are voting on the Iran deal

Only two Senate Democrats have come out against the deal: Sens. Robert Menendez of New Jersey and Charles Schumer of New York. Meanwhile, 26 Democrats and the two independent senators who caucus with the Democrats have come out for the agreement reached last month between six world powers and Iran. That leaves only 14 more Democratic votes up for grabs. Unless 11 of those senators break with the president to vote against the deal, the agreement trading sanctions relief for Iran for restrictions on its nuclear program will become law. (To put it another way, the deal’s supporters need just four more yes votes in the Senate to uphold the deal.)

A continuously updated tally by the Washington Post counts four already leaning in support of the deal and 11 unknown or undecided. Those tilting toward support are Richard Blumenthal of Connecticut; Thomas Carper of Delaware; Jeff Merkley of Oregon; and Joe Manchin III of West Virginia.

According to the math, the deal looks likely to be upheld. For the record, fewer than 10 percent of all presidential vetoes throughout history have been overridden by votes in Congress.

The Jews are lobbying

Despite the high likelihood of the deal proceeding — or perhaps because of it — Jewish groups have maintained an intense lobbying push against and for the deal. Citizens for a Nuclear Free Iran, which is backed by the American Israel Public Affairs Committee, is spending down a $30 million war chest to run ads against the agreement. AIPAC has distributed a script to followers to provide guidance on what they should say when they ring their Congress member.

“I am calling/writing to urge you to oppose the flawed Iran deal, which does not end Iran’s pathways to a nuclear weapon,” says the script directed at undecided members of Congress. “Please stand up for the security of the United States and our allies and demand a better deal.”

A rabbinic petition (though it’s not clear all the signatories are rabbis) against the deal garnered more than 900 signatures as of Tuesday, while last week 340 rabbis sent a letter to Congress supporting the deal (prompting the right-wing Zionist Organization of America to release an “analysis” of the pro-deal rabbis that found the overwhelming majority supportive of “activities that are hostile towards Israel.”)

“Rabbis have no advantage over plumbers when it comes to understanding and assessing the agreement with Iran,” Rosner wrote. “They have no better professional qualifications and no more relevant experience.”

While most nonpartisan Jewish groups that have weighed in are opposing the deal, there have been a couple of notable exceptions. Last week, the Reform movement announced that it would not take a position.

“At this time, there is no unity of opinion among the Reform Movement leadership — lay and rabbinic alike — just as there is not unity among our membership as to the JCPOA itself,” the Union for Reform Judaism said in a statement Aug. 19, using the acronym for the Iran deal, the Joint Comprehensive Plan of Action. “Thus, there is simply no clarity that would support taking a position ‘for’ or ‘against’ the JCPOA itself.”

Meanwhile, a group made up primarily of former lay or professional leaders of Jewish organizations took out a full-page ad in The New York Times on Aug. 20 in support of the deal. In what is perhaps a sign of the rightward shift of Jewish organizations (or their big donors) in recent decades, among the pro-deal ad’s signatories were three former leaders of major Jewish groups whose current leaders oppose the deal: Thomas Dine, AIPAC’s executive director from 1980 to 1993; Seymour Reich, chairman of the Conference of Presidents of Major American Jewish Organizations from 1989 to 1990; and Robert Rifkind, president of the American Jewish Committee from 1994 to 1998.

The deadline for the vote in Congress on the Iran deal is Sept. 17, just two days after Rosh Hashanah.