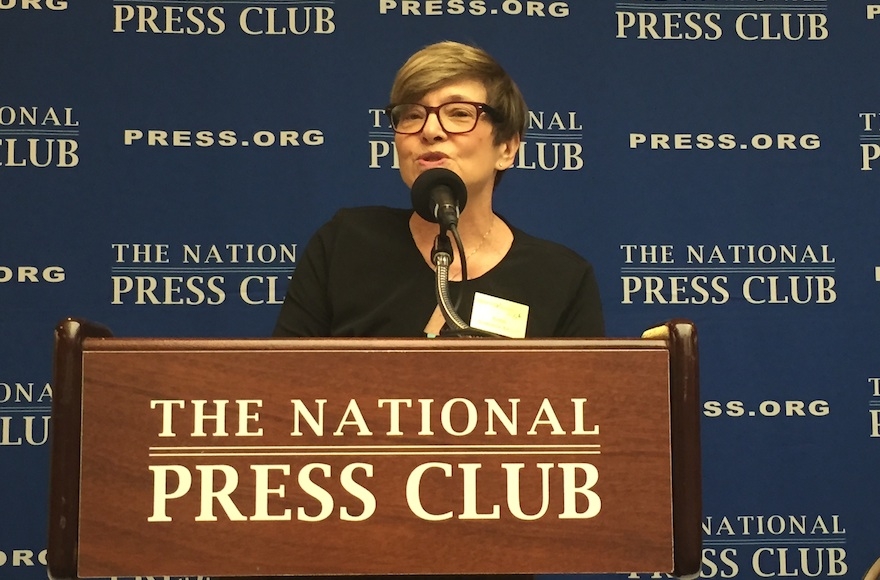 WASHINGTON (JTA) — As Italy’s only female rabbi — as well as the country’s only non-Orthodox rabbi — Barbara Aiello has grown accustomed to a level of global renown. But in her home country, it can be hard to get respect.

The Pittsburgh native has been asked to leave synagogues in Florence and Rome for wearing a kippah, she told JTA. She was ejected from a kosher shop in Milan for the same reason, she believes. A guide at Rome’s Great Synagogue said on a tour she was on that progressive rabbis don’t exist in Italy.

“I think that’s unconscionable for one Jew to do to another,” Aiello said of the evictions.

Aiello, who lives in a house in Serrastretta, Calabria — in the “toe” of Italy — that’s been in her family for 430 years. She was the first in her family to be born in the United States. She started traveling to Italy annually with her father in the 1970s and decided to move for good in 2004.

After hearing Aiello conduct a memorial service in Italy for her brother-in-law, several people encouraged her to apply for an open rabbinic post at a Milanese synagogue. She held the position for two years.

“It was always my goal to get to the south of Italy,” she said.

There she searches for southern Italian “anusim” — those with “hidden” Jewish roots that date back to forced conversions during the  Inquisition — and helps them better understand and connect to their roots.

On her website, Aiello writes that her efforts to help Italian families discover their Jewish heritage relates to the concept of “L’dor v’dor,” or “that special Jewish experience of ‘from generation to generation.’” The research is her passion, she told JTA, because half of Calabria and Sicily was Jewish prior to the Inquisition, and she sees a hunger in those communities to know more about Judaism.

“The light in the soul has never died,” she said while visiting Washington, D.C., this month. “From the discovery of their Jewish roots, many want to embrace Judaism.”

Aiello supplements that research, and her broader efforts to create a more inclusive Italian Jewish community, by officiating at destination weddings, bar and bat mitzvahs, baby namings, conversions and other ceremonies.

READ: In southern Italy, long-lost Jews returning to the fold

That Aiello, whose website notes that she “welcomes the opportunity to officiate and co-officiate for interfaith and non-traditional couples,” has ruffled Italian feathers isn’t hard to imagine. Italy’s Orthodox rabbinate holds a monopoly, according to Aiello, who as a non-Orthodox rabbi is not permitted to legally marry couples in Italy. (She performs a symbolic service after the couples obtain their civil marriages.)

This summer, Aiello performed eight bar and bat mitzvah ceremonies and trained the students, who hailed from Maryland, New Jersey, Boston and Vancouver, to read their Torah portions from her synagogue’s 18th-century scroll. She also officiated at a bar mitzvah at a historic synagogue in Croatia — its first bar mitzvah in 75 years — and named a baby from Singapore.

“That’s really how we stay alive financially,” she said of the Italian Jewish Cultural Center of Calabria, which she founded and directs, and the 82-member Sinagoga Ner Tamid del Sud, which she leads.

Riccardo Shemuel Di Segni, the chief rabbi of Rome, has heard directly from Aiello on several occasions about being kicked out of the synagogues and store.

“Probably in Milan — not the yarmulke, but her being recognized as a Reform rabbi, arose that reaction,” he said. “Our behavior here in Rome is obviously different. There are several women with yarmulkes who show up in our synagogue when they visit Rome. I never forbid them to join the ‘ezrat nashim,'” Hebrew for the women’s section.

The rabbi acknowledged, however, that he doesn’t control the security officers or “their sometimes strange decisions.”

“The more common popular reaction here is of curiosity, not of rejection,” Di Segni said.

According to the rabbi, Aiello sparked “great interest and sympathy” when she arrived in Italy because she represented a “double new” as both a female rabbi and a progressive Jew. In Calabria, Di Segni said, there are very few “official” Jews and “an uncertain number of families who claim to be of marrano origin, as Barbara herself says about hers.” (Aiello told JTA that her family fled persecution in Toledo, Spain, for Portugal, and then fled the Inquisition to Sicily and Morocco, and then to Italy.)

The “actual impact of Aiello’s activities is now limited to this kind of niche, with a very small influence on the general Jewish population and maybe even among the Reform groups,” he added.

Philip Balma, an associate professor of Italian literary and cultural studies at the University of Connecticut, said that Jewish Italians who are aware of Aiello’s work tend to see her as an “anomaly.”

“Although I have a lot of respect and admiration for the work she does, to my knowledge any sense of legitimacy she enjoys in Italy comes, at least originally, from her formation and contacts in the United States,” Balma said.

Aiello’s efforts to search for southern Italian anusim and to identify “hidden” members of the Jewish community is fascinating to academics, according to Balma. That research leads Aiello and two full-time colleagues through troves of 15th- and 16th-century documents, searching for Jewish names that may match the hidden Jews with their ancestors.

Aiello said that about 65,000 Jews lived in Italy prior to World War II, and the number now inscribed in the Jewish community ledgers is about 38,000. The official count, she said, only includes those who can document four Jewish grandparents.

“That number is decidedly low,” she said. “There would be many, many more people who would be Jewish if the Orthodox community allowed them to be.”

Asked how large the count would be if the hidden Jews were included, she said, “I think it would double, at least.”

Aiello said she wanted to be a rabbi from a young age, even in the absence of female rabbis at that time. She thinks the idea first occurred to her as a child seated in the women’s balcony.

“As I looked down I was struck by the beauty of the Torah service, especially at the Hakafah, Torah procession,” she said. “Looking down from above it looked as though the Torah was dancing. I thought it was a Torah ballet. Even as a small child I thought, ‘I want to do that. I want to be the leader of the Torah ballet.’”

Aiello became a teacher and a professional puppeteer before beginning rabbinic certification from Rabbinical Seminary International, at age 47, which she completed five years later.

After assuming her current rabbinical post, Aiello now finds herself clashing with the power of the Orthodox rabbinate, which the Italian government recognizes and which she thinks the Catholic Church doesn’t want to question.

“Italy is a bureaucratic nightmare on a good day,” she said.

Religious and bureaucratic potholes aside, Aiello is optimistic that progressive Judaism can help strengthen Jewish communities.

“I really believe that it’s an exciting time to be Jewish,” she said. “When we think that our numbers are dropping — actually, if we were to open the door and extend the hand of Jewish welcome to ‘bnai anusim’ and to Jews of diverse backgrounds, we would see our numbers grow.”