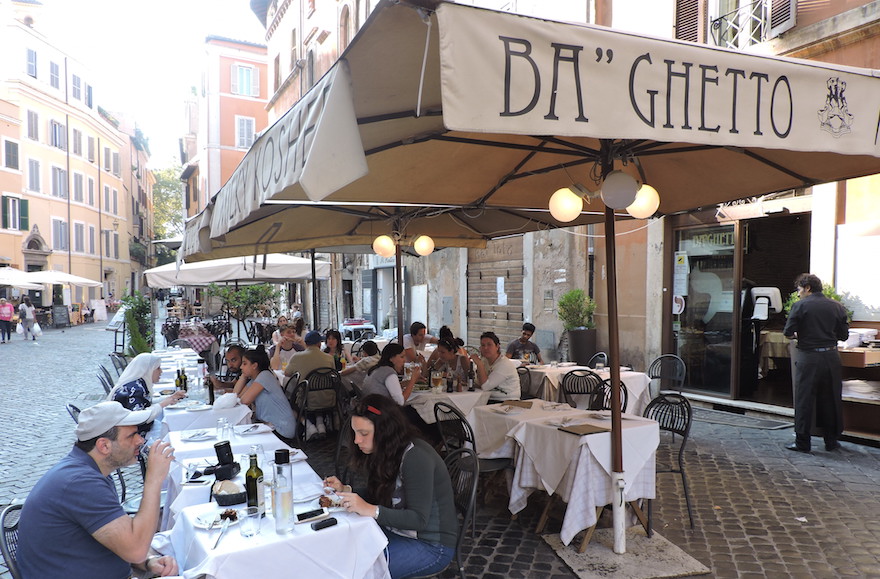 Diners at the Rome branch of Ba’Ghetto, a kosher eatery which operates three locations in Italy. (Ben Sales)
Advertisement

ROME (JTA) – Whenever Georges De Canino worries about the future of Italian Jewry, he looks at the bricks in the building across the street from his apartment in the center of this city’s old Jewish ghetto.

A painter who sometimes stares at the stones for inspiration, De Canino claims that they originally came from the Colosseum, and they remind him of history’s long arc.

The stones have been in Rome for nearly 2,000 years. The city’s Jews have been here for longer. And neither of them, De Canino says, is going anywhere.

“Above all, it’s a community that survives invasions, barbarians, the economy,” De Canino said. “We’re a small community that is reborn, that grows. We play a very important role in Italy.”

It’s a sentiment widely shared by other members of Italy’s 24,000-member Jewish community. At a time when growing anti-Semitism and rising immigration to Israel is prompting even large European Jewish communities to fret publicly about their future, community leaders here are surprisingly optimistic even as they contend with many of the same challenges facing small communities elsewhere: high intermarriage rates, young people moving abroad and shrinking numbers. 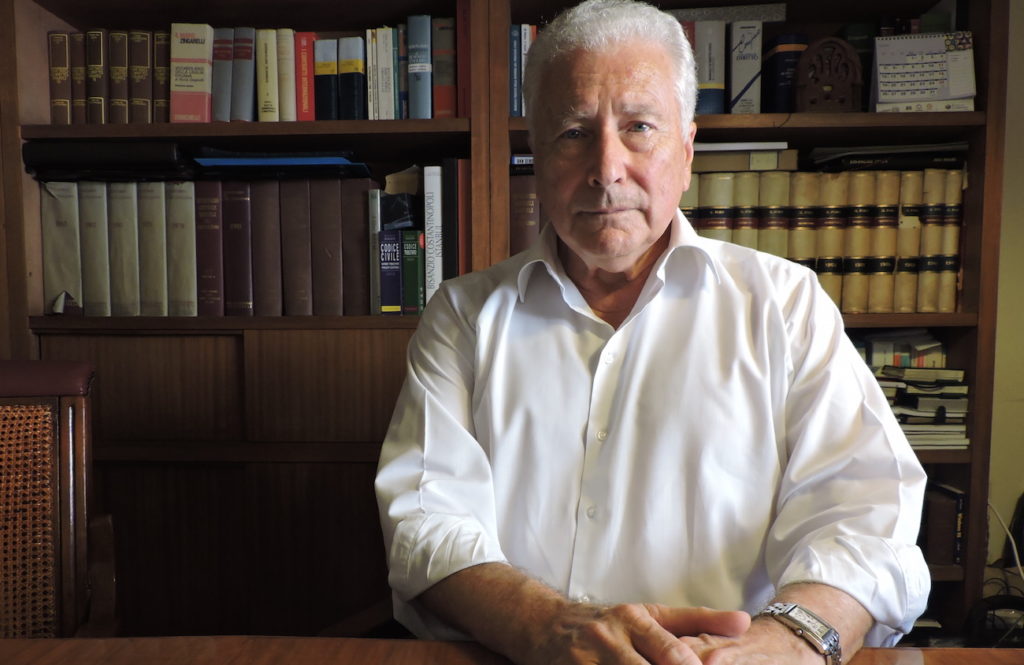 “The Jewish community in Italy is a small world, but very diverse,” said Renzo Gattegna, president of the Union of Italian Jewish Communities. “There is a phenomenon of demographic decrease of the Italian communities. But I think this is balanced out by the increase of the cultural activities.”

The community has an intermarriage rate of 50 percent, and many young people, driven by a skyrocketing youth unemployment rate – it hit 44 percent this year – have sought better opportunities abroad. Last year, 340 Italian Jews moved to Israel, doubling the previous year’s figure. The national Jewish community’s numbers are also declining, from an official figure of almost 27,000 in 1995 to 24,000 today.

“I don’t think of the future of my children in Italy,” said Johanna Arbib-Perugia, former chair of the Jewish fundraising operation Keren Hayesod in Rome. “I don’t see Italy as a country that presents brilliant prospects for the future – not in terms of jobs.” She added that some Italian Jews “see Israel today as the land of opportunity.”

With a history dating to the time of the Roman Empire, Italian Jewry predates – and developed in relative isolation from – both Sephardic and Ashkenazic Judaism. What has resulted is a Jewish population with distinctive customs and dress. Florence’s 1,000-member community has a prayer book with a liturgy and melodies all its own, as do Rome, Venice and other cities. Unlike other European communities, many Orthodox Italian synagogues have organs – a holdover from a 17th-century legal ruling.

But Italy’s Jewish leadership appears unfazed in the face of declining numbers that would seem to imperil the community’s survival. Leaders call unemployment a national problem, not a Jewish one, and Gattegna said that plenty of people move back and forth between Israel and Italy. Rome and Milan, he predicted, would preserve the traditions of smaller communities.

“Jewish survival doesn’t depend on numbers, it depends on ideas,” said Guido Vitale, who edits the national Jewish newspaper, Pagine Ebraiche. “People who see problems in small communities are people who want to treat Jewish people like an army that needs to go to a war of propaganda.”

Several Italian Jews preferred to focus on what they described as a vital community. Rome supports more than 20 kosher restaurants, many of which opened in the past few decades. One eatery, Ba’Ghetto, has opened two branches in the past seven years to meet demand from locals, not tourists. The capital also has three Jewish kindergartens and one K-12 school.

In Florence, an effort to engage more with the wider community led to the launch of Balagan Cafe, a biweekly series of cultural events. In Milan, the local Chabad outpost hosted an annex to the EXPO Milan 2015 food fair that focused on kashrut. And in Florence and Torino, Jewish student associations have formed to organize cultural events and celebrate holidays.

“I think the communities of Rome and Milan and Florence and Torino will have a very strong Jewish life,” said Gabriele Fiorentino, a consigliere, or board member, of the Union of Young Jewish Italians. “There is a part that moves to another country, but there are also young people that remain in Rome or in Milan, so I think in the near future there’s no danger for the bigger communities.”

Roman Jews say the increase in kosher restaurants and the active Jewish school scene are part of a rise in Jewish observance that began in 1967, when 5,000 Libyan Jews escaping anti-Semitic riots fled to the city. On the whole, the Libyans were more religious than the native Romans. Though they still maintain their own synagogues, the two communities have married and merged, spreading Jewish observance.

“You dress and speak Italian, but at a certain point when it comes to your culture, only you can keep it,” said the Libya-born vice president of the Rome Jewish community, Claudia Fellus. “After the Libyan Jews came, there were many more kosher butchers.”

One of the community’s greatest strengths is what it lacks – a fear of anti-Semitism. There have been attacks, but leaders and laypeople alike dismissed them as a fringe phenomenon or tied them to developments in the Middle East.

On a recent summer day, Italian Jews wore yarmulkes on the street and tourists loudly spoke Hebrew under Israeli and Italian flags. The scene stood in stark contrast to Jewish communities elsewhere in Europe, where locals warn visitors against any outward signs of their Judaism.

Community members say Italy’s Jews have always gotten along with their neighbors. This contact, Gattegna says, isn’t a threat but a strength. He says Italian Jewry could grow even stronger by channeling that instinct for integration toward Jewish communities in neighboring countries, forging contacts with them to play an active role in world Jewry’s future.

“Italian communities are not well connected with other European communities or American communities,” Gattegna said. “It is a mistake not to develop this contact. We risk missing a great chance for cultivating friendly relations.”

De Canino disagrees, saying the community should invest in emphasizing its own distinctiveness. Italy has succeeded, he says, in drawing tourists to view its historical and cultural landmarks, and Italy’s Jews should do the same. That, he says, is how the community will live on, like stones from the Colosseum.

“The future of this community is as a cultural community,” he said. “We need to invest in culture, in tourism, a role of hospitality, a cultural role. Petroleum runs out. St. Peter’s Basilica never ends. Venice never ends. Milan never ends. The Uffizi never ends.”