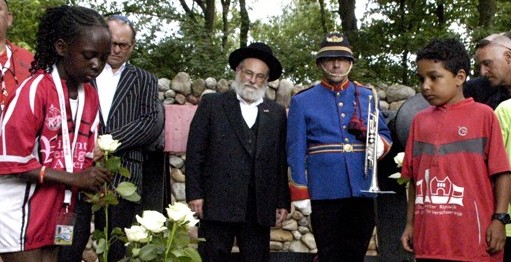 Jacobs made the revelation on Sunday during a speech near the eastern city of Arnhem, days after an armed Islamist opened fire aboard the Thalys train connecting Paris to Amsterdam before being subdued by passengers. Five people were injured.

“The events illustrate the threat is real not only for Jews, but for all in Europe because we are in the same boat,” Jacobs told JTA ahead of an event  marking the 40th anniversary of his service to Dutch Jewish communities. Some 500 people convened for the commemoration.

He said the advice from police was because of his official function, for which Jacobs often appears on television, making him easily identifiable.

Jacobs, a Chabad-Lubavitch rabbi whom Dutch officials have often described as a “bridge builder” for his interfaith and outreach work, said the wave of violent anti-Semitism that began in the early 2000s in Europe “poses a dilemma for bridge builders because now we are seeing elements to which one does not want to serve as a bridge.”

He also said that growing anti-Semitism is causing him to doubt “whether to advise members of the community to stay or to leave.”

Among those who attended the gathering in Oosterbee to mark Jacobs’ tenure were Israel’s ambassador to the Netherlands, Haim Divon, and senior politicians including the former speaker of the Dutch lower house, Gerdi Verbeet, and senior police officers. Representatives from of the Rabbinical Center for Europe and leaders of other faiths also were on hand.

Jacobs, whose home has been vandalized five times in recent years and who is currently under police surveillance, has said that if not for his responsibilities to the Jewish communities of the Netherlands, he would leave for Israel.

In 2012, Jacobs was made an officer of the Order of Orange-Nassau — among Holland’s highest honors — by Beatrix, who was then queen of the Netherlands.