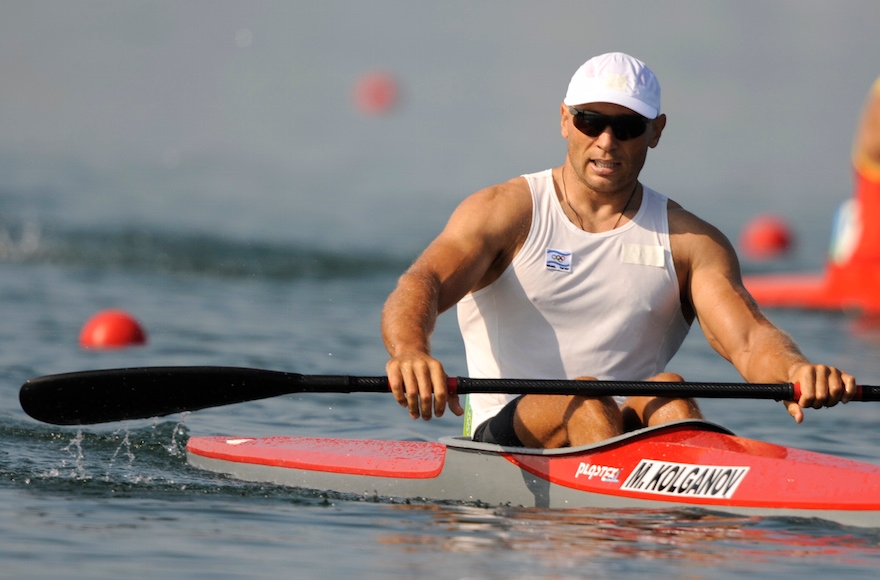 Fifteen years after standing atop a podium in Sydney to become Israel’s fourth Olympic medalist, Michael Kolganov last week announced he was leaving the Holy Land for Germany.

“My heart is in Israel, but my future is in Germany,” Kolganov told Israeli daily Israel Hayom. “My closet at home is full of medals and trophies, but that won’t pay for the groceries.”

The issue of young Israelis moving to Germany in search of a more affordable life has become a hot issue in recent years, with some questioning the patriotism of such people.

Kolganov, 40, who won a bronze in the K-1 500 meters kayaking event in the 2000 Summer Olympics, told Israeli news site Ynet that he would move to Germany at the end of last week to take a position there as a coach.

JTA was unable to reach Kolganov at his Israeli telephone numbers this week.

The Olympic kayaker is not the only world-class athlete to leave Israel for “greener pastures” this year. In June, Konstantin Matusevich, 45, the Israeli record holder for the high jump, at 2.36 meters, announced he was moving to Toronto with his family, according to Ynet. Matusevich tied with six other athletes for the second-highest jump at the Sydney Olympics, but did not finish in the top three due to a disqualified jump.

Kolganov and Matusevich complained in interviews with the Hebrew press that it was difficult for former Olympic athletes in Israel to make a living and support their families after retiring from competition. In the interview with Ynet, Kolganov said he had been collecting unemployment benefits since April while looking for a new job.

In response to Kolganov’s comments, Israel’s Olympic committee said it was saddened to hear that the kayaker was leaving Israel, but noted that it had found him more-remunerative employment before he announced his decision to leave.

The committee said that the job would have required Kolganov and his family to move from their home in Tiberias to central Israel, to which Kolganov appeared to agree. Several days later, according to the committee, Kolganov gave notice that he had found other work and was turning down the offer.

Like many of Israel’s top athletes in track, field, swimming and gymnastics in the past two decades, Kolganov and Matusevich were born in the former Soviet Union. Kolganov was born in Tashkent, today the capital of Uzbekistan, and moved to Israel in 1996. Matusevich was born in Kiev and made aliyah in 1995.

Matusevich, in an interview earlier this year, suggested that his family was a casualty of Israel’s ongoing housing and cost of living crises.

He told Ynet that he and his wife lived in a rented apartment and neither they nor their two children would likely be able to afford a home of their own in Israel. “My wife Ella and I never lacked work as personal trainers,” he said. “The problem is the cost of living.”

This time last year, many Israelis were in an uproar over young people supposedly moving to Germany because of the much cheaper prices there for chocolate pudding and other groceries.

Then-Agriculture Minister Yair Shamir responded to the issue by saying, “I pity the Israelis who no longer remember the Holocaust and abandoned Israel for a pudding.”

In a Facebook post recounting the horrors of the Holocaust, then-Finance Minister Yair Lapid said, “So forgive me if I’m a bit impatient with people who are willing to throw the only state the Jews have into the garbage because it’s easier to live in Berlin.”

The pudding uproar was an aftershock of the 2011 summer social justice protests across Israel. At their peak, over 400,000 of Israel’s 8 million citizens took to the streets to protest the high cost of living as reflected in the prices of things as important as housing and as basic as cottage cheese.

The cost of living in Israel has remained high, growing 34 percent between 2008 and 2013, according to a report by the Knesset Research and Information Center at the end of last year. The study found that in 2005, Israel’s cost of living was 18 percent below Organisation for Economic Co-operation and Development average, while in 2013 it was 10 percent above the OECD average. But meanwhile, the average gross Israeli wage rose just 24 percent in nominal terms, to about 9,200 shekels ($2,400) a month.

Culture and Sports Minister Miri Regev responded relatively gently to news of Kolganov’s departure. “Olympic medalist Kalganov has a wonderful past, and I hope that he will return to Israel.”