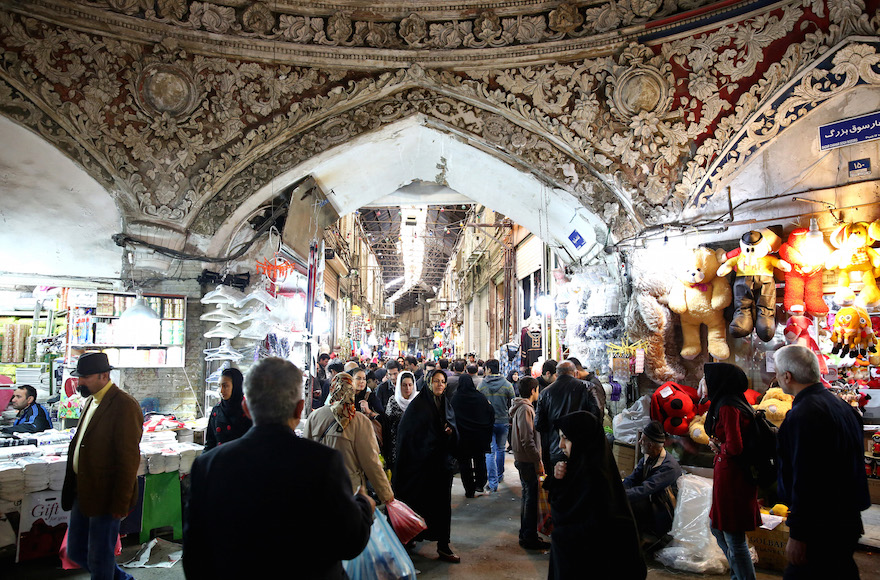 WASHINGTON (JTA) – If you’re an American who likes Iranian caviar and pistachios, you’re in for a treat.

Once the nuclear deal with Iran is implemented, the U.S. sanctions that until now have blocked the export of those Iranian foodstuffs into the United States will be lifted. Bon appetit.

But if you’re planning on packing a suitcase and making Iran your next vacation destination — or seeking investment opportunities in the Islamic Republic — keep your excitement in check: Travel will continue to be inhibited by a requirement that funds transferred to Iranian airlines must go through “non-U.S., non-Iranian financial institutions”.

Iran and six world powers led by the United States reached agreement in mid-July to lift some sanctions on Iran in exchange for limits on the country’s nuclear program. Though the deal, known formally as the Joint Comprehensive Plan of Action, has yet to be formally adopted, it looks increasingly likely.

Thanks to his veto power, President Barack Obama has enough votes of support in the U.S. Congress to overcome any vote to disapprove the deal, and possibly even thwart a vote if Senate Democrats filibuster. (Iran’s parliament, while yet to vote on the agreement, is expected to approve it.)

But Obama administration officials are also taking pains to make clear that non-nuclear sanctions on Iran will stay in place once the International Atomic Energy Agency verifies Iranian compliance with the nuclear restrictions, probably in about six months to a year. The motivation is partly to assuage deep concerns among Americans about the deal and partly to warn Iran against bad behavior.

The U.S. Treasury’s Office of Foreign Assets Control, which enforces Iran sanctions, says it’s already stepping up enforcement of non-nuclear sanctions — restrictions in place for human rights abuses and for backing terror, which are not tied to the JCPOA.

“We have no illusions that Iran is a state sponsor of terrorism and is continuing to engage in these bad activities,” a Treasury official, who spoke on condition of not being identified, told JTA.

There are several areas where sanctions still remain in force. The U.S. government’s primary sanctions, which have been in place since the 1990s and ban any U.S. residents or businesses from dealing with Iran, will stay, with only a few exceptions.

“General prohibitions include: investment in Iran; importing Iranian-origin goods or services; and exporting goods or services to Iran, including clearing U.S. dollars,” the Treasury Department said in the sanctions outline it provided to JTA.

More than 200 Iranian individuals and groups targeted with “secondary sanctions,” which penalize non-U.S. entities for its dealings with Iran, also will remain in place. Among the groups targeted is the Iranian Revolutionary Guard Corps, which controls substantial portions of Iran’s economy, including the construction, energy and shipbuilding sectors.

Long lists of individuals and groups designated as terrorist by the United States remain sanctioned, as do any U.S. or non-U.S. parties that deal with them. That includes Ghasem Soleimani, the commander of the Revolutionary Guards’ elite Quds Force. Soleimani had been singled out because he is on a list of individuals to be delisted from nuclear-related sanctions, but U.S. officials say he remains sanctioned for the Revolutionary Guard’s backing of terrorist acts. 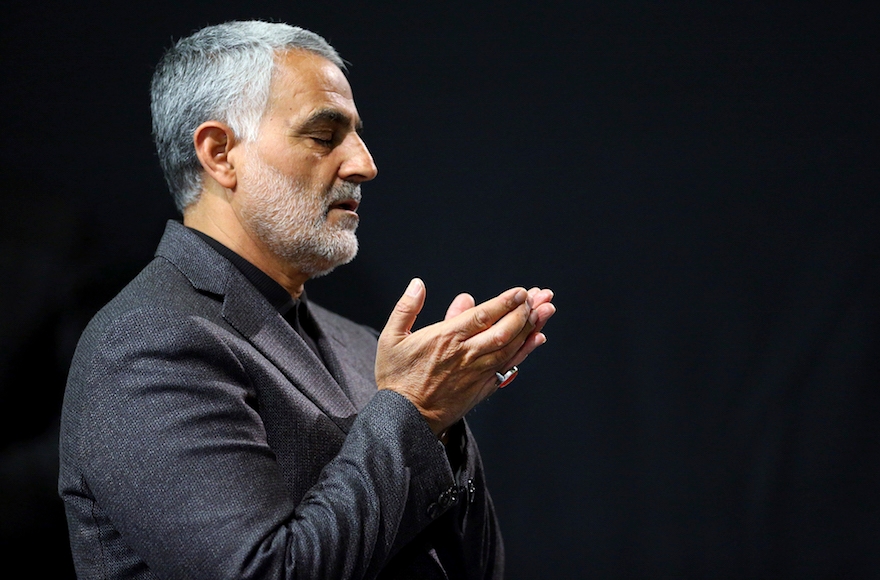 Ghasem Soleimani, the commander of Iran’s elite Quds Force, praying at a mosque in the residence of Supreme Leader Ayatollah Ali Khamenei in Tehran, March 27, 2015. Soleimani is labeled a terrorist by the United States and would still be sanctioned under the Iran nuclear deal. (Office of the Iranian Supreme Leader/AP Images)

Other areas where the United States will keep in place sanctions on parties who deal with Iran include transfers of weapons of mass destruction technology to Iran, including missile delivery systems.

Using technology to track and oppress one’s citizens, such as software that allowed Iran to spy on activists or to disrupt communication among Iranians, is also still banned, the Treasury official told JTA. U.S. sanctions targeting “persons providing information technology to Iran or Syria that could be used by those governments to commit serious human rights abuses” stay in place.

But the United States will no longer sanction non-U.S. entities that deal with Iran’s financial sector — most importantly, with its central bank. Until now, the U.S. government has thwarted dealings by third parties with Iran by threatening to ban those parties from any dealings with the huge and lucrative U.S. market if they also dealt with Tehran.

Also lifted are U.S. sanctions on insurers who underwrite Iranian businesses, on software developers and on those dealing with Iran’s carmakers. Iranians will be able to download the latest software updates to their devices and expect a return of French Peugeots to their streets.

Some sanctions will remain in the United States but be lifted elsewhere. For example, gas stations in Beijing, Brussels and London may be dispensing petrol that started out as Iranian crude, but no such crude will reach the United States. An oil importer in London or Delhi wanting to transfer funds to an Iranian bank account to import goods will be able to do so.

Iran’s shipping sector will be free to deliver goods and invite foreign investment.

In fact, under the deal the European Union will lift virtually all of its sanctions on financial dealings with Iran and on trade with its energy sector. The U.N. Security Council also will remove bans on dealing with Iran’s financial institutions.

U.S. companies, while banned from dealing directly with Iran, will be able to license their services to non-U.S. entities. For example, Iranian airlines will be able to purchase airplane parts manufactured under U.S. license. Iran has blamed airline crashes on its inability to get replacement parts for U.S.-made planes in service since before the 1979 revolution.

But not all Iranian airlines will see the bans lifted. Mahan Air, which the U.S. government says has secretly ferried Iranian Revolutionary Guards fighters and weapons on its flights, will remain sanctioned.

The few areas where direct trade between Iran and the United States will resume include pistachios and caviar, a nod to Iranian-Americans who have imported these luxury goods in the past.