Why Putin embraces Jews, but not gays 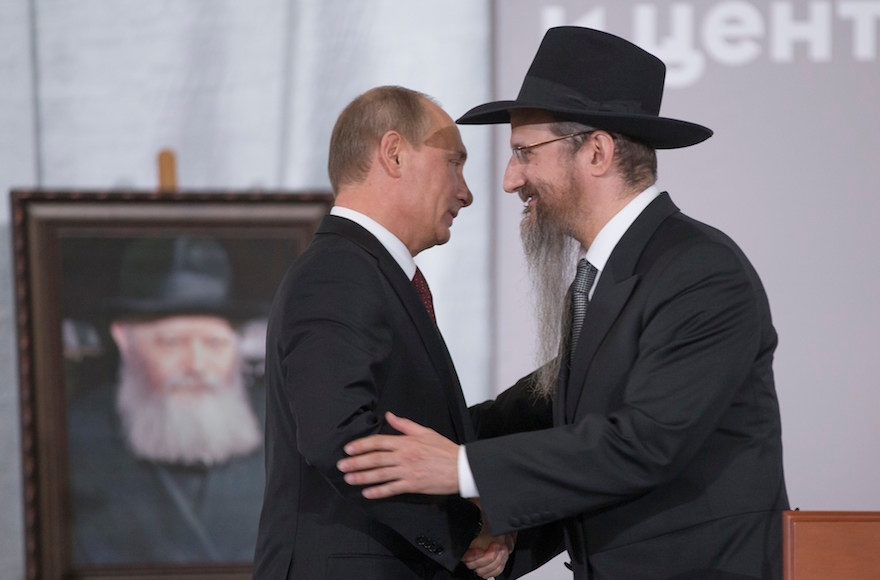 For the Kremlin, the interfaith roundtable last Thursday at Kazan’s Hall of Culture provided the perfect propaganda moment.

Before the meeting, dozens of journalists snapped pictures of Russian Chief Rabbi Berel Lazar posing alongside the mufti and archpriest of Tatarstan — a predominately Muslim state with its capital, Kazan, 800 miles east of Moscow.

Set up by the local government and the Limmud FSU Jewish group, the event kicked off celebrations of the completion of renovations at a local synagogue, which the government returned to the local Jewish community in 1996.

A better opportunity could hardly be imagined for reaffirming the commitment of Russian President Vladimir Putin and his government to defending minorities — his stated reason for invading Ukraine last year and a recurring element of pro-Russian advocacy.

So, amid the speakers’ praises of tolerance, I was baffled to hear the archpriest, Vladimir Samoilenko, inveigh against homosexuals.

“We, all of us, will not put up with attempts to legitimize homosexual wedding,” Samoilenko boomed. “Wedlock between men and women assures the continuation of life and we’re duty-bound to resist dangerous ugliness like homosexuality and promiscuity. I know I speak for my Jewish and Muslim colleagues, too.”

None of the dozens of dignitaries present at the roundtable disputed this assertion, which came just minutes after Samoilenko had reassured his listeners that persecution of minorities in Russia was a thing of the past. But at least one of the prominent rabbis, David Rosen, later distanced himself from Samoilenko’s comments.

“I don’t share it,” Rosen, a former chief rabbi of Ireland and the American Jewish Committee’s director of interreligious affairs, said of Samoilenko’s concern about homosexuality. “I don’t see alternative lifestyles as a threat to my own religion.”

To Rosen, a professional builder of bridges between Jews and other faith groups, Samoilenko’s anti-gay tirade was a symptom of how many Christians and Muslims fear phenomena they see as subversive. Jews, he said, feel less threatened because Judaism seldom has power structures to preserve. He called this openness “the privilege of powerlessness.”

As an Orthodox rabbi, Rosen would not officiate at a gay wedding any more than Samoilenko would, but he feels no need to fulminate about it, he explained.

In Russia, gay rights are too major an issue to be examined theologically. Between 2006 and 2013, Putin’s ruling party pushed through legislation in 10 Russian states banning “propaganda of homosexuality” among minors. The laws effectively limit displaying anything gay-related, including slogans or articles advocating equal rights, in public spaces.

That drive, and Russian authorities indifference to — and sometimes collaboration with — hate crimes against gays, have earned Russia considerable rebuke in the West, including by the White House. 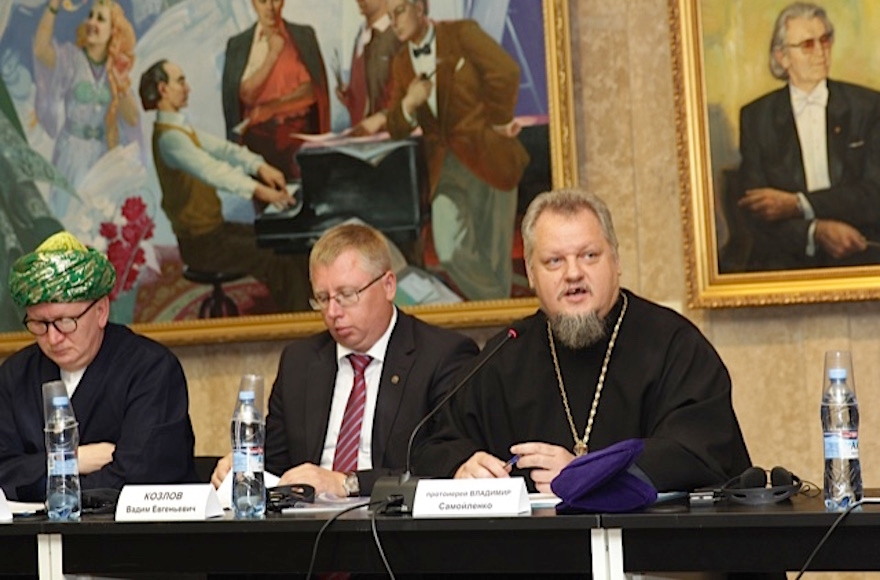 As a student of Russia’s propaganda war with the West, I often wondered why Moscow was willing to undermine its own effort to portray itself as a safe haven for Jews and some other minorities with the bad press it’s getting over state-encouraged homophobia.

After all, Putin’s claim to tolerance is hard to dismiss when it comes to Jews.

Treated as a punching bag by Communist rulers and waved off as a nuisance by Boris Yeltsin, the restitution-resistant president who replaced them, Russian Jewry has experienced a golden age under Putin. From the maritime border with Japan to the land border with Finland, dozens of synagogues in Russia have been returned to communities that, with help from Chabad rabbis, began to flourish and open hundreds of kindergartens, schools and Jewish community centers.

Kazan is a case in point. Home to 10,000 Jews, it last week hosted its first Limmud Jewish learning conference, which local volunteers set up for 450 participants, with help from Limmud FSU. In 2012, the city saw its first Jewish music festival – an annual event in which klezmer bands from across the world perform in open-air venues before Rosh Hashanah.

The Kremlin has not been shy about leveraging this cultural revival, as the chief rabbi calls it, in the battle for public opinion – including in the West. And the constant expansion of RT — the huge television network the Russian government set up in 2005 — to additional languages and channel packages speaks volumes of Putin’s willingness to invest in public relations abroad.

Why, then, is the Putin government so eager to tarnish its tolerance credentials in Western eyes with its anti-gay agenda?

Part of the answer, it seems, is that, for Putin, homophobia holds the potential of serving as a consensus cause around which he can rally popular sentiment — including nationalistic fervor and hatred of the gay-tolerant West.

An overwhelming 88 percent of respondents to a 2013 survey by the All-Russian Public Opinion Center about the gay propaganda ban said they supported it. In another survey from 2013, by the Levada Center, 35 percent said homosexuality was a disease and another 43 called it a “bad habit” born of bad parenting.

By contrast, hostile attitudes to Jews are prevalent in only 30 percent of the Russian population, according the Anti-Defamation League’s 2015 world index – less than in France (37 percent), Poland (45 percent) and Ukraine (38 percent). Simply put, even though it is reviled in the West, the Kremlin’s anti-gay agenda enjoys more popular support that would other forms of xenophobia.

I asked a gay friend who was born in Russia whether he though Putin personally disliked gay people.

“I don’t think Putin is homophobic on a personal level, no,” he told me. “Nothing suggests so in his public statements or actions before the anti-gay wave suddenly erupted in recent years.”

The wave swelled, my friend noted, just as Putin began positioning Russia as an economic and ideological alternative to the West. “It’s popular, it’s anti-Western, it’s something to rally the people around, so Putin plopped down the anti-gay card,” my friend said. “Now it’s Russia versus Gay-ropa.”

I asked him why he didn’t say anything during the roundtable discussion in Kazan. He was there in his professional capacity, he answered, and the meeting wasn’t about gay issues anyway.

“Besides,” he added, “I wasn’t even in the room. Just before that priest opened his mouth, I went out for a smoke. Spend enough time in Russia and you’ll develop a good sense for when to walk away.”