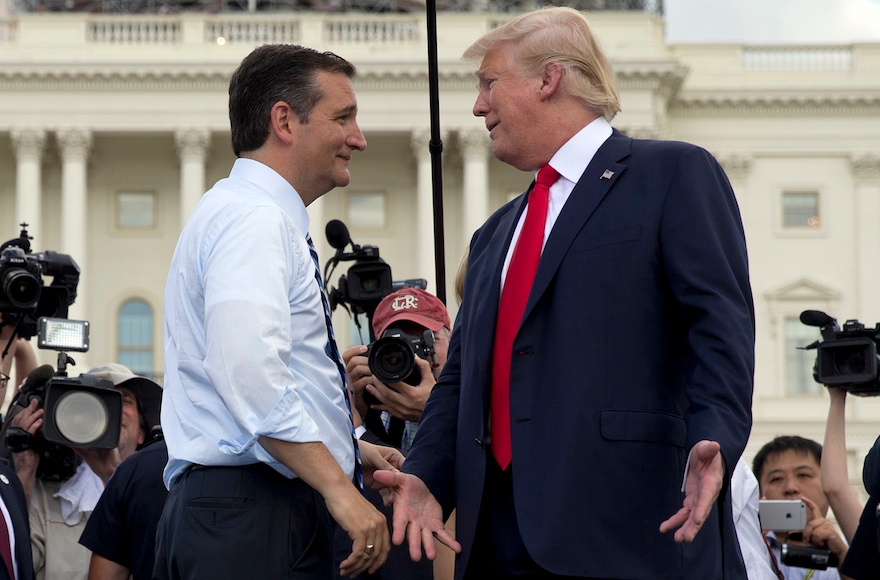 WASHINGTON (JTA) — Hundreds gathered outside the Capitol for a rally against the Iran nuclear deal featuring shofar blowing and presidential hopefuls Donald Trump and Ted Cruz.

At the protest, jeers accompanied the mention of Iran.

Trump, who is leading in the polls among Republican candidates, was the acknowledged main draw.

“We are led by very, very stupid people,” the billionaire real estate magnate said of President Barack Obama and the Congress. “I’ve never seen something so incompetently negotiated — and I mean never.”

Cruz, who walked to the podium accompanied by the Who’s “Won’t Get Fooled Again,” called the Iran deal “catastrophic.” Not only would Iran acquire nuclear weapons, but with the lifting of economic sanctions on Iran, “billions of these dollars will go directly to Hamas, Hezbollah” and other terrorist groups, the Texas senator told the cheering crowd.

Beck quoted from the Torah, not always correctly, and referred numerous times to “truth” and “eternal truth.”

Speaking against the Iran deal, he said, “When someone says they will knock the face of the Jew off the earth, you should listen. They mean it.”

Prior to the rally, about 300 people attended a nearby news conference conducted by a delegation of Orthodox rabbis calling for the defeat of the Iran deal.

Organized by the Orthodox Union Advocacy Center, the outdoor event was designed to be reminiscent of a march by rabbis in 1943 in support of American and Allied action to stop the destruction of European Jewry.