Inside the final throes of the Iran deal battle: Hugs, pink kaleidoscopes, and Trump 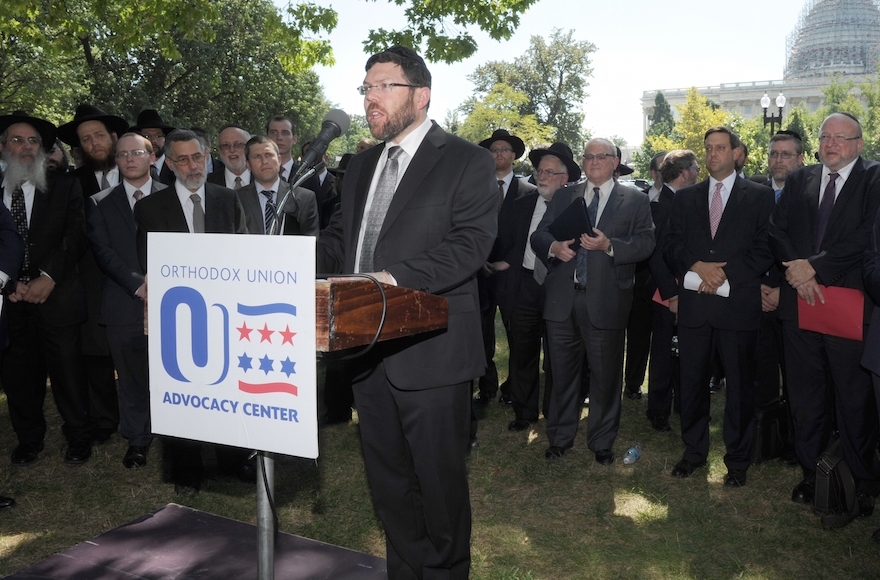 WASHINGTON (JTA) – Inside the congressional offices, there were soft-spoken recriminations, tears, even the occasional consoling hug. Outside, under a blazing sun, there were whoops, full-throated cries against appeasement and condemnation of President Barack Obama’s “pink kaleidoscope.”

The final throes of the battle over the Iran nuclear deal on this week were delivered with volume, fury and in the quiet agonies of friendships riven by the deal.

On Wednesday, meetings in congressional offices between American Israel Public Affairs Committee activists and staffers for Democrats who had supported the Iran nuclear deal often devolved into tears, according to those present. In at least one case, an AIPAC staffer was so inconsolable that a congressional staffer reached out spontaneously for a hug. The message from AIPAC, staffers said, was one of “disappointment.” AIPAC would not comment on the content of the meetings.

Some 300 Orthodox Union-affiliated rabbis joined the 1,000 or so AIPAC activists in the last-minute lobbying effort against the deal.

“When you have an opportunity to scream in dissent and you are silent, you have done wrong,” Rabbi Shalom Baum, the president of the Rabbinical Council of America, said at a news conference.

Meanwhile, on the West Lawn outside the Capitol, several hundred demonstrators at a rally organized by the Tea Party Patriots vocally protested the deal in 90-plus degree heat. The headliners included Donald Trump, Sarah Palin and Phil Robertson, the patriarch of reality TV’s “Duck Dynasty” show.

Palin, the former Alaska governor and onetime Republican vice presidential nominee, drew cheers when she slammed Obama for negotiating with Iran, “the No. 1 braggadocious sponsor of state terrorism,” by her accounting.

“Only in an Orwellian Obama world full of sparkly fairy dust blown from atop his unicorn as he’s peeking through a pretty pink kaleidoscope would he ever see victory or safety for America or Israel in this treaty,” she said. 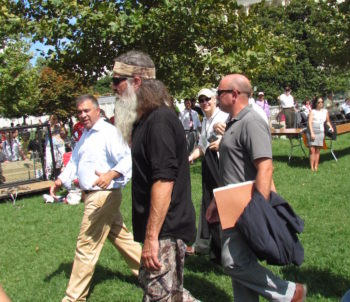 Trump’s remarks, however, focused less on the deal and more on himself and his cherished achievement of not losing: “We may have so much winning if I get elected that you may get bored with winning,” he said.

By Thursday afternoon it was over: Senate Democrats blocked a vote on the deal, effectively handing Obama victory on his signature foreign-policy initiative. Republicans failed to garner the 60 votes necessary to end debate on the measure and bring it to a vote. Voting against the motion to end debate were 42 Democrats – one more than needed.

Implementation of the agreement announced in July between Iran and six major powers to limit Iran’s nuclear program in exchange for the easing of sanctions is likely to begin in the coming weeks.

“This vote is a victory for diplomacy, for American national security, and for the safety and security of the world,” Obama said in a statement.

On Friday, the U.S. House of Representatives approved a bill against the deal by a 269-162 majority. But the number was not enough to override a presidential veto and, in any case, the Senate filibuster renders the House vote merely symbolic.

AIPAC tried hard to find some victory amid the failure of the effort to kill the nuclear deal.

“While the American people deserved a direct up or down vote on the resolution of disapproval, the fifty-eight senators who spoke out against the agreement and voted to invoke cloture succeeded in their effort to express opposition to the deal,” AIPAC said in a statement following the Senate vote on Thursday.

A number of lawmakers, led by Sen. Ted Cruz, R-Texas, a presidential candidate, still hope to block the Iran deal through legislative maneuvers, but AIPAC appears ready to move to the next step and assume a posture of watching implementation of the nuclear deal like a hawk.

“Congress and the executive branch must now maintain constant vigilance concerning Iranian compliance with the deal and be ready to move quickly against any Iranian effort to advance its nuclear quest,” AIPAC’s statement said.

By late Thursday, both Obama and Israeli Ambassador Ron Dermer, who had become the face of opposition to the deal, were sounding more conciliatory notes. Obama told rabbis in his annual Rosh Hashanah call that he was ready to meet with Israeli Prime Minister Benjamin Netanyahu and move forward with enhancing Israel’s security in the post-deal reality. 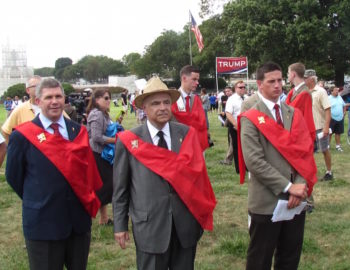 Members of the American Society for the Defense of Tradition, Family and Property group attending the Tea Party rally against the Iran deal on Capitol Hill in Washington, D.C. on Sept. 9, 2015. (Ron Kampeas)

Netanyahu had suspended U.S.-Israel discussions on security cooperation until he was certain that opponents of the deal in the U.S. Congress could not defeat it. Dermer, hosting guests at a subdued holiday reception at his residence Thursday evening, appeared ready to move on.

“Despite the strong disagreement we have over the Iran deal, I am quite confident that America and Israel will deepen cooperation in the years ahead to address the enormous challenges we will continue to face together,” said Dermer, who had attended a friendly Rosh Hashanah reception the previous evening at Vice President Joe Biden’s residence.

Rabbi Stuart Weinblatt of B’nai Tzedek synagogue in suburban Maryland, who had been a leader in opposing the deal, was among those who attended the reception. He told JTA he had no plans to address the issue in his High Holiday sermons.

“Everyone is so immersed in the issue that this is one time people want to hear a spiritual message and step away from all of the craziness of what’s been going on and all the intensity,” he said.

Rabbi Jonah Pesner, the director of the Reform movement’s Religious Action Center, said that as the Iran debate wound down, Reform rabbis were likelier to use their sermons to discuss racial justice, restoring the Voting Rights Act or the Middle East refugee crisis.

If there will be preaching about Iran, he said, “What you will hear is the continuation of what has been a clear rabbinic call for a return to thoughtful discourse, restoring civility in the Jewish community and restoring the deep love and partnership between Israel and the United States.”