Arab Americans look to Jews for help on Syrian refugees 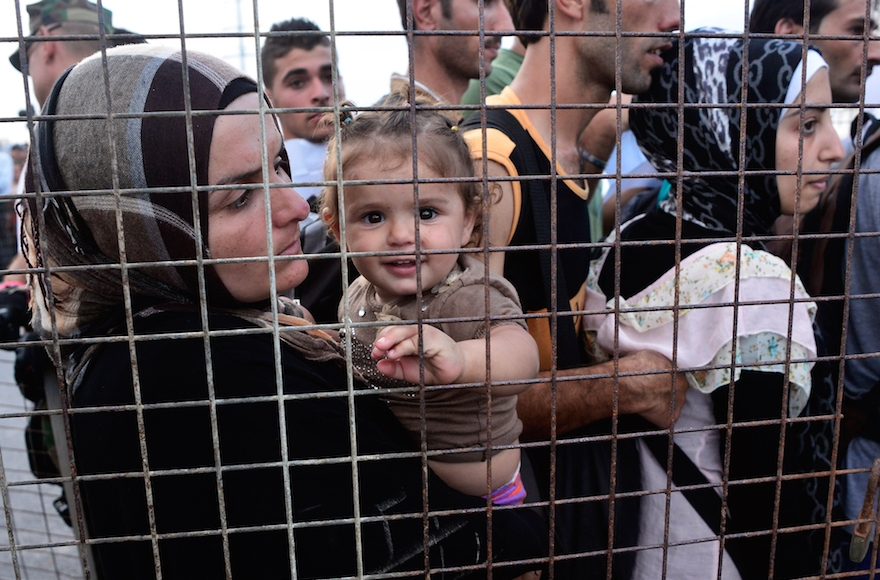 Migrants and refugees with temporary documents board a ferry to take them to Athens at the port of the Greek island of Kos on August 14, 2015. (Milos Bicanski/Getty Images)
Advertisement

ANAHEIM, Calif. (JTA) — Arab Americans advocating on behalf of Syrian refugees have found some unlikely allies in their effort to resettle families from the war-torn nation: influential Jewish groups.

Over the last few days, HIAS, the Hebrew Immigrant Aid Society, launched a petition drive calling on President Barack Obama to swiftly open America’s gates to an additional 100,000 Syrians, and the president of the Union for Reform Judaism wrote to the president and congressional leaders calling for a coordinated international response.

“HIAS has been consistently calling for more resettlement and pushing back against the discriminatory rhetoric opposing opening the doors to Syrian refugees,” he said.

This week, HIAS president Mark Hetfield held a conference call with American Jewish organizational officials to talk about his agency’s decision to join with Arab-American leaders in critiquing U.S. policies that limit the numbers of refugees settled in the United States to about 70,000 per year.

Only about 1,500 Syrian refugees have been admitted since the start of the civil war in 2011. Obama announced Thursday that the United States soon would take in 10,000 refugees, but Hetfield said that number was inadequate.

“We are dealing with a global humanitarian crisis to which the entire world must respond,” he said in a statement issued within hours of Obama’s announcement. “If Germany can open its doors to 800,000 asylum seekers, the U.S., with a population four times the size of Germany’s and a history as a nation of immigrants and refugees, can take 100,000.”

Hetfield appealed to regional Jewish groups to act on the grassroots level to help absorb refugees.

Akram Abusharar, a Gaza-born U.S. immigration attorney who handles approximately 80 Syrian asylum cases per month, said HIAS’s involvement was a boost to his cause.

“The Jewish community has more capacity to move the politicians on this issue than the Arab-American community,” he told JTA in an interview.

Responding to lobbying from HIAS, the administration moved in February to provide exemptions for people who provided limited or insignificant support to Syrian rebels who do not pose a danger to the United States.

But more recently Hossino has tracked an uptick in opposition to bringing Muslim immigrants to the United States — especially among Republican candidates and members of congress. In television appearances last weekend, Republican presidential candidate Carly Fiorina said the United States has “done its fair share” when it comes to the refugee crisis. Sen. Rand Paul asserted that the U.S. “can’t accept the whole world” and should adopt a cautious stance towards resettlement.

Hetfield, in the conference call, said concerns about the Muslim and Arab identity of the refugees are misplaced, reminding listeners of similar reasoning when some nations in the 1930s blocked Jewish immigration from Germany.

“To confuse the refugees with the people that they’re fleeing,” he said, “is to make the same mistake that kept Jews out.”