Palestinian flag to be raised at U.N. headquarters 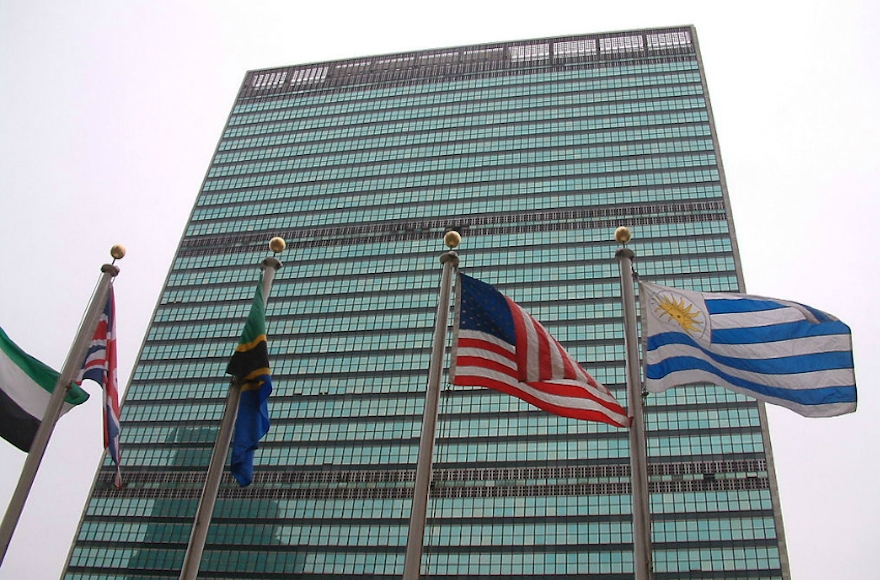 (JTA) — The United Nations General Assembly adopted a resolution allowing what it officially recognizes as the “State of Palestine” and the Vatican to raise their flags outside the organization’s facilities.

In a 119-8 vote on Thursday, with 45 abstentions, the General Assembly approved the move allowing the two entities, both nonmember observer states, to raise their flags following the flags of member states.

The resolution calls on Secretary-General Ban Ki-moon to implement it within 20 days, in time for Palestinian President Mahmoud Abbas’ Sept. 30 arrival at the U.N. headquarters in New York, CNN reported.

On Friday, the Wafa news agency quoted Abbas as saying: “The struggle will continue until the Palestinian flag flies over our eternal capital, occupied Jerusalem.”

Riyad Mansour, the Palestinian permanent observer at the United Nations, has previously said the action would be another step in solidifying the Palestinian government’s presence in the international arena.

Samantha Power, U.S. ambassador to the United Nations, told the General Assembly before the vote that the United States is committed to achieving peace between Palestinians and Israelis, but “raising the Palestinian flag outside the U.N. Headquarters is not an alternative to negotiations and will not bring the parties closer to peace.”

Israel, the United States, Canada and Australia voted against the resolution, along with four Pacific island nations. Britain abstained, along with at least 10 European Union members states including Germany and the Netherlands. France, Poland, Italy and Spain were among the E.U. states that voted in favor of the resolution.

According to Mansour, there are at least two open spots for flags to be posted outside U.N. headquarters in New York.