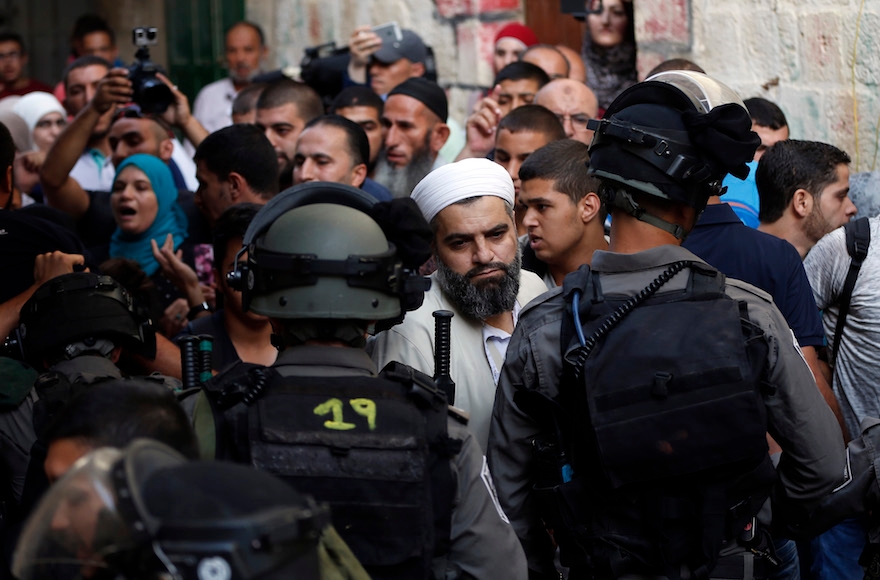 A group of religious Jewish tourists ascended the Temple Mount on Wednesday, reportedly without incident, though a video circulated later in the day showed Muslim demonstrators chanting “God is great” in Arabic and one demonstrator being arrested.

The clashes on the Temple Mount from Sunday to Tuesday came amid intelligence reports that Muslim protesters were stockpiling rocks, firecrackers, firebombs and pipe bombs with which to attack Jewish visitors to the site, which is holy to Muslims and Jews.

Over the three days, Israeli security forces arrested some 26 Palestinian protesters, and 14 Israeli police officers were lightly injured by rocks and firecrackers, Ynet reported. At least 36 Palestinians were injured in the clashes, the Palestinian Maan news agency reported.

Israeli Prime Minister Benjamin Netanyahu said Wednesday during a tour of Jerusalem, including the sites of recent violence, that Israel is “in favor of strictly maintaining the status quo on the Temple Mount.”

Under the status quo, the Temple Mount is under control of the Muslim Waqf, as it has been since 1967, and only Muslims are permitted to pray at the site, though Jews and Christians may visit. The Waqf is under the jurisdiction of Jordan.

“The status quo is upset constantly by agitators and rioters who barricade themselves on the Temple Mount and harass worshippers or, more precisely, the Jewish visitors,” Netanyahu said. “This is also unacceptable to us. We are dealing with this in cooperation and dialogue with Jordan, and not just with them.”

In a phone call Tuesday with Vice President Joe Biden, Jordan’s King Abdullah expressed concern over the Temple Mount violence. During the call, Biden “called on all parties to exercise restraint, refrain from provocative actions, and to uphold the historic status quo at the holy site,” according to the White House.

On Monday, before a meeting with British Prime Minister David Cameron in London, Abdullah said the violence could change Jordan’s relationship with Israel. The king said in a statement that he was “very concerned and angry over the recent escalations in Jerusalem, specifically in Al Aqsa Mosque.”

“Any more provocations in Jerusalem will affect the relationship between Jordan and Israel, and Jordan will have no choice but to take action, unfortunately,” he said.

State Department spokesman John Kirby said in response that the United States was “deeply concerned by the recent violence and escalating tensions” concerning the Temple Mount.

“We strongly condemn all acts of violence,” he said. “It is absolutely critical that all sides exercise restraint, refrain from provocative actions and rhetoric and preserve unchanged the historic status quo on the Haram al-Sharif Temple Mount, in word and in practice.”

The United Nations’ Middle East peace envoy, Nickolay Mladenov, in an address Tuesday to the Security Council said the violence on the Temple Mount could spark a regional conflict.

“As the Middle East faces a vicious tide of terror and extremism, such serious provocations have the potential to ignite violence well beyond the walls of the Old City of Jerusalem,” Mladenov said.